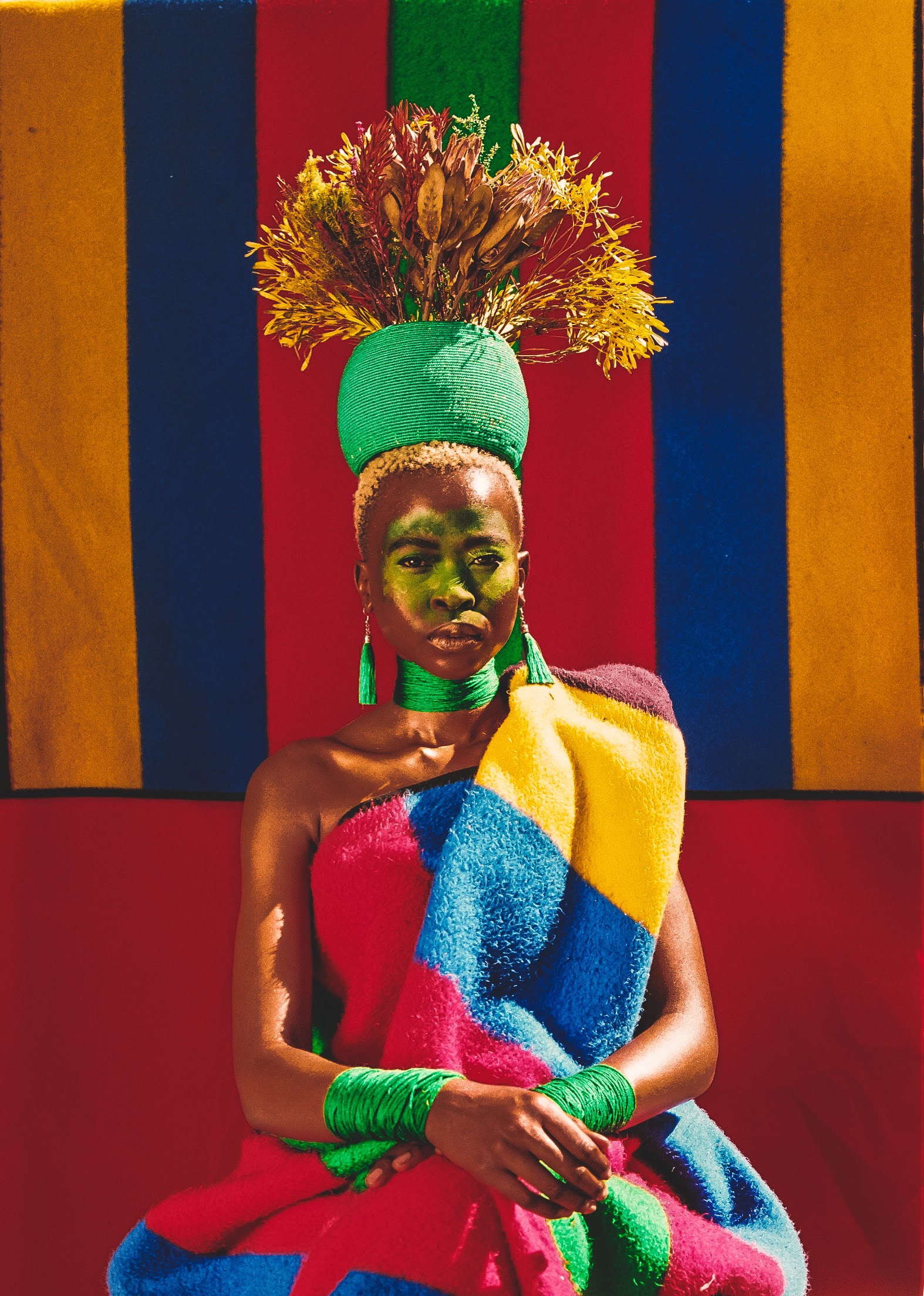 Zana Masombuka, also known as ‘Ndebele Superhero’, is a Johannesburg based creative director who draws inspiration from her upbringing in rural kwaNdebele; in a small town known as Siyabuswa. Zana explores and engages with identity, time, conflict and diversity as the core themes of her work.

We take a look at some of Zana’s favourite creations and her inspiration behind each of the images:

Akwande: Let it be abundant

“This concept was inspired by Eastern chakra systems and how that is paralleled with the notion of abundant thinking. It further unpacks the ideas on balance and the role it plays in the wholistic experience of the human. I engaged with bilateralism of African Cultures, particularly the Ndebele Culture and the importance for abundant thinking in the word “akwande”, which is what is often used in a form of a greeting as well as when someone has achieved something.

The project explores themes of power, ego, manipulation, creation, sex, survival , addiction, awareness and compassion. The colour is used to further intensify the overall theme of abundance and the emotion is complemented by the expressions of the subject and the title of each image . The project takes you on a journey of enlightenment and the true embodiment of abundance.”

“According to the Oxford dictionary, ‘time’ refers to the indefinite continued progress of existence and events in the past, present and future regarded as a whole. Furthermore, it refers to the continued progress of existence as affecting people and things. Therefore this project aims to capture the essence of time and how it impacts the evolution of African culture through the ages, the process passing down of knowledge from one generation to the next, as well as the tension present between those generations; through the metaphorical use of lemons.

The lemons are used to juxtapose the young and old generation present in African societies. This is done by using varying degrees of dehydrated lemons. The 1st part of the series talks about the refreshing and often zestful spirit of the African youth; and how they have the potential to take the culture forward but need the wisdom to do so sustainably and effectively. This is represented by the light and less dehydrated lemons used in this part of the series.”

“The 2nd part of the series talks about the older generation and how culture and tradition are some of the few things they still have control over post the colonial era.”

“This series aims to talk about the ongoing politics of youth identity in South Africa. It aims to do this by the juxtaposing national symbols with various other elements, including youth identity politics, but not limited to it. In this particular part of the series, we focus on the colour green, which is a colour present in the South African flag, symbolizing fertility. The symbolism of the green colour from the flag is similar to the colour of “isrholwane”, which is the headpiece worn by the subject.”

The dead proteas are a symbol of the past and how the idea and understanding of what it means to be Proudly South African today, is not necessarily the same as what it used to be. The youth of present day South Africa is complex.

“This project aims to explore the functionality of the “born frees” who are creating themselves anew, telling their own stories.To a certain extend, we are the fertile soil in which we are planting and cultivating ourselves, hence the significance of the colour green.Secondly, it aims to talk about the importance e of tribalism, patriotism and nationalism; and how these particular themes engage with the culture of globalization. This series is currently an ongoing project.”

Nodugwana: An Ode To My Grandmother

“Nodugwane: An Ode To My Grandmother is inspired by my early upbringing, where I was being raised by my grandmother. It speaks to the story of a lot of African kids, whose parents had to work. My grandmother was my 1st teacher on respecting the flow of life. The way she tended to her garden and all of that which sustained her, was like a dance of pure alchemy.  She moved gracefully through life, with a wisdom like no other. She spoke of how nature has a way of reminding us of our own mortality and how we should absorb as much of it as we can, so that we are able to find contentment and greet all of life with open arms needing nothing.

Zana’s work has been showcased in the Julie Miller Art Institute for their Winter Art collective as well as their Spring Art Collective in 2018. She has also taken part in the ‘Friends of a King Zimela’ exhibition in 2018 at the J&B Hive in Braamfontein, Johannesburg.