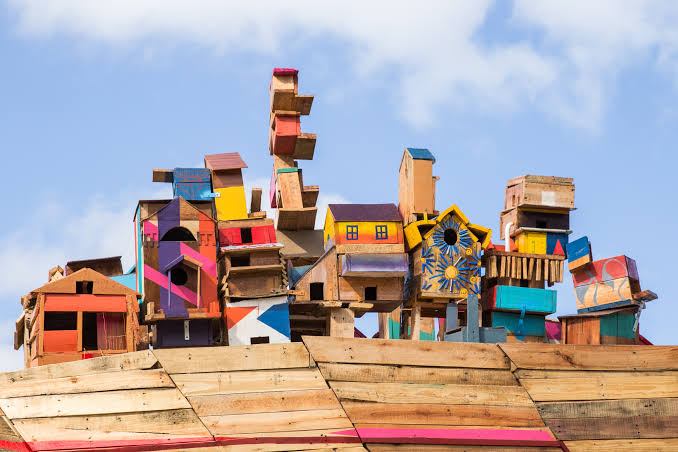 For four weeks, Vrygrond youth and volunteers from San Francisco built a sculpture made out of recycled materials such as wooden pallets and steel. Titled “The Ship of Ubuntu”, the art work is about three metres high. It has a boat shape with the face of a man in front and a collection of houses on top.

For Hendericks, the sculpture represents a community that can go anywhere. “If we stand together as a community we can do anything,” he says.

“This represents a start to something greater,” says Vrygrond resident Anteeno Hendericks. He is one of over 40 youth people from Vrygrond, Capricorn and Overcome Heights that helped build a wooden sculpture – which now stands tall on the corner of Prince George Drive and Capricorn Boulevard near Muizenberg.

Hendericks has been living in Vrygrond for five years and says that it has been a “struggle”. Vrygond has been hit hard by gang violence and housing problems. Through the art work, they are aim to show that there are better options than gangsterism in this world. “There is something better than selling yourself short or going to prison for somebody else,” he says.

The art project is a collaboration with Mexican street artist Libre Gutierrez and the Sozo Foundation. Gutierrez creates artwork across the globe sometimes involving migrants and incarcerated people. Last year, he facilitated and painted a colourful mural on the Vrygrond Community Centre’s walls. The sculpture was also supported by the Vrygrond Community Development Forum.

Lygia Stebbing from San Francisco said that a lot of people have ideas of what Vrygrond is about: that ‘it’s full of gangsters and drugs’, but in fact, the community is beautiful. Stebbing is one of the art work organisers from EDvance, a teachers preparation program at San Francisco State University in California.

“People should challenge themselves beyond the stereotypes, people may look one way but it doesn’t necessarily mean that they are people to be afraid of or that they dont care about their community, ”says Stebbing.

Since 2012, Stebbing and her students have been running programmes in Vrygrond which include bringing in pre-school teachers from the United States.

One of the exchange students is Noelle Owusu. Owusu teaches children in the Bay View area in San Francisco and says that communities there face similar struggles to those in Vrygrond, including gang violence, poverty and inequality. She describes it as a ‘forgotten community within a very affluent resource-filled area’.

Owusu says that when you see beauty in a neighbourhood like this one, it doesn’t make all the violence stop or take the trauma away, but it gives people a reminder that there is beauty in the world.

Daniels, 26, has been staying in Vrygrond his entire life. He says that at one point he was doing all the “bad stuff”. But he started working with a different group of people. “The people I was involved with didn’t allow me to be the person that I was,” he says. “They saw something in me that I didn’t see in myself.”

In the future, Stebbing hopes to take youth from Vrygrond to the US for programmes in San Francisco.

This article first published on GroundUp