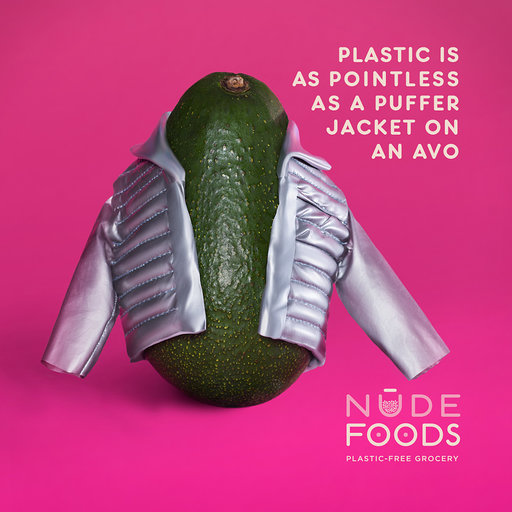 As an attempt to get people to use less plastic, global communications and advertising agency Saatchi & Saatchi teamed up with local milliner and stylist, Crystal Birch and NUDE FOODS to create a plastic-free campaign to draw attention to the devastating effects plastic has on our planet.

Founder/Owner of NUDE FOODS, Paul Rubin, was driven to create the store by frustration in regular shops’ wasteful and over-packaged products and the fact that nobody appeared to be doing anything about it.

NUDE FOODS is one of Cape Town’s most popular plastic-free grocery stores and encourages shoppers to buy B.Y.O. Tupperware or their in-store cloth bags to do their shopping – where most items are sold by weight. The store does not only offer it’s shoppers fruits and vegetables, they also offer a variety of goods such as cereal and environmentally friendly washing up liquid that can be poured into containers.

Well known for her wide range of designer hats, Crystal Birch moved from her core business to create fashion items from single – use plastic packaging for fruits and vegetables. Not only is this campaign fun and interesting to look at, but the concept it carries is also rather strong and thought-provoking. The campaign, which was released earlier this month for Plastic-Free July aims to highlight just how unnecessary plastic packaging is.

The images used for this ad campaign feature fruit and vegetables dressed up in elegant clothing and were shot by photographer David Prior. The shoot was treated like a high-end photoshoot with lighting, a backdrop and a stylist. This was done to ridicule single-use plastic packaging.

“I think people will realise how ridiculous and unnecessary some packaging is”, says Birch. She also expresses that there is no doubt that this campaign will stir up conversations around the topic.

The campaign was accompanied by a five-part ‘Pointless Documentary’ on Nude Foods’ Instagram story section. The series documents the making of the briefing, to the actual shoot.

For more information about the store and this cool ad campaign, visit nudefoods.co.za.