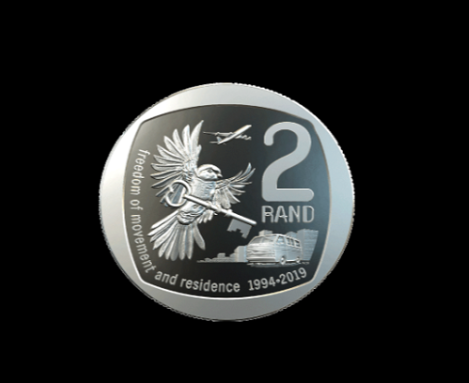 Following the success of the SA25 coin series commemorating ‘25 Years of South Africa’s Constitutional Democracy’, the South African Mint now invites designers to enter designs for the reverse of a new R2 coin, depicting a right from South Africa’s Bill of Rights.

Designers are free to choose a right from the remaining 22 Bill of Rights – which did not form part of the 2019 SA25 coin range. South Africans can enter the contest by submitting their designs to the SA25 website (www.sa25.co.za) between 12 September and 31 October 2019.

The SA25 coin series was a remarkable culmination of extensive public engagement sessions with South Africans. Young people born in 1994 and after, colloquially referred to as ‘born-frees’, were invited to give their perspectives on the concepts of democracy, freedom and culture in South Africa as we know it today. Their perspectives, many of which were aligned to the rights enshrined in chapter 2 of the Constitution (Bill of Rights), influenced the coin themes, which in turn informed the designs of the five 2019 R2 circulations coins.

The coin design competition was launched at LATITUDES Art Fair 2019, where the South African Mint presented ‘The Independent’, an exhibition of emerging and unrepresented artists from around the African continent. Artworks from the 2019 SA25 coin series will be on exhibit to inspire those contemplating making their mark and submitting a design for the 2020 coin.

By law, the obverses of all South African legal tender circulation coins feature the national Coat of Arms. Its design remains standard and is not part of the competition.

Further details on the competition can be found on the SA25 website.