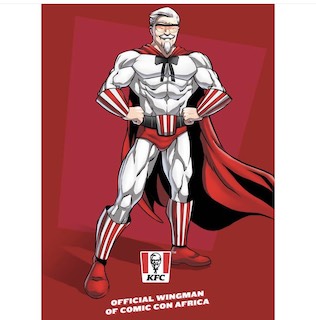 Posted at 14:30h in 10and5, Collaborations, Comics, Illustration by Between 10and5
0 Likes

This year, Comic Con Africa promised to be bigger and better – with KFC on board as the festivals official wingman. Comic-Con Africa is a 4-day event which took place from 21 to 24 September 2019, the event showcases comic books and science fiction/fantasy related film, television, and similar popular arts.

There is a natural fit for Food Delivery and the gaming occasion, and both are rapidly growing in South Africa. Gamers are big fans of KFC’s delivery service, so creating this felt like a natural fit and a fantastic opportunity for everyone involved.

Before devoting himself to his own company and fine art full time, Mkhize worked as the head illustrator for a popular soccer comic book Supa Strikas Srika entertainment; a character-based entertainment company that has done work for the likes of KFC, ADT, African Bank, Nation Roads Agency, Caltex, Anglo American, and Umbra to mention a few.

The comic book quickly rose to popularity with new episodes being published in steady succession. The obvious remedy to meet with the demand as well as extend availability nationwide would be to partner with David Phillip publishers.

In 2016, KWEZI then went on to be published at all Exclusive Books stores and Bargain Books stores nationwide. The partnership has published two KWEZI collector’s editions thus far, regularly enjoying best-seller status in some prominent stores.

For more information about Mkize and to view some of his work, visit loyisomkizeart.com.