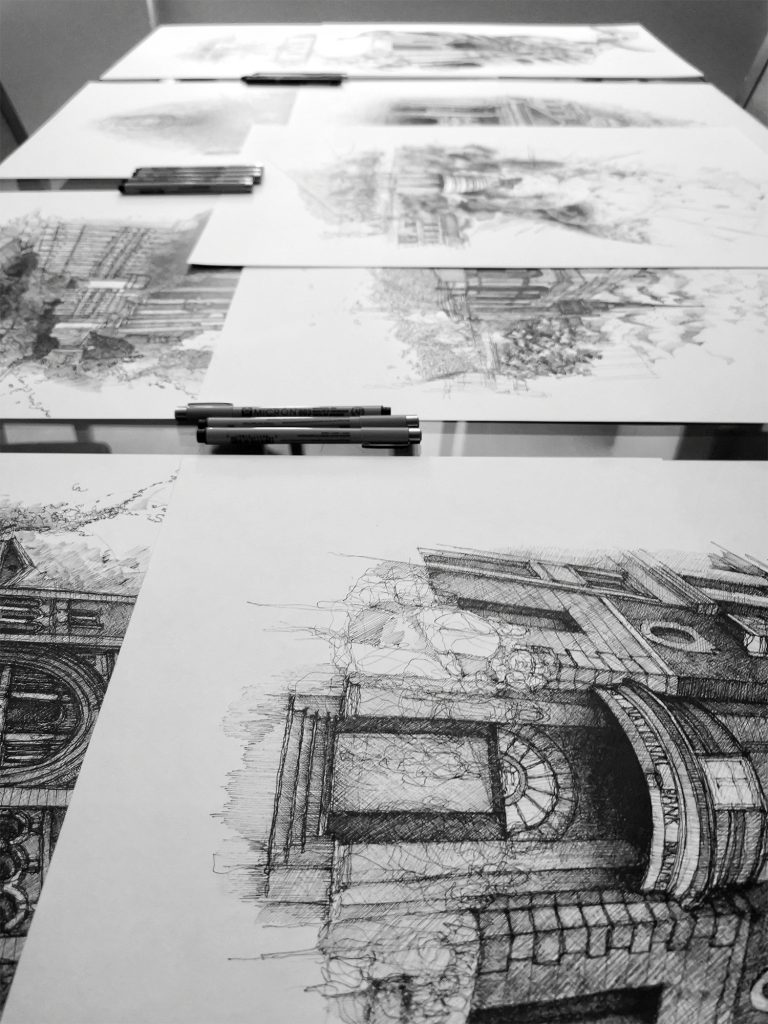 The second collection, Late Night Sketch Tales ii, is a series building on that style. This series, however, slightly differs from the first one by the intensity of hatch and style. This time, the exhibitor captures the subjects; these being buildings and public spaces in a more ethereal light where the boundaries between the tangible nature of architecture and public space are blurred by the intangible realms of the imagination and mind.

“Each image is almost an ode to the imaginative nature with which I conjure and envision architecture to be – almost a dream state construct put onto paper and hopefully one day built,” says MacClements.

In essence, the sketches are a play on abstract realities. The striking contrast between light and dark aims to evoke a sense of these realities – that of conscious and unconscious. As Christopher perceives it, they play heavily on the ephemeral nature of the mind.

As these are more abstract than exact architectural representation, they rely heavily on the hand to move freely without using rulers. So, once the basic geometries have been referenced from the subject, MacClements lets his imagination go to work. As a collection, each piece never completes itself without beginning the next; the works therefore never develop in isolation from one another and should always be viewed as a collective with each piece as one metaphorical piece of a puzzle.

“At any given time, I may bounce between 2-5 drawings – to keep the conceptual nature of the works as true to ‘ephemeral’ as possible. They in essence may appear to the eye to be rather manic, but this is deliberate. Like my own thoughts they need to be stimulated by the next adventure, the next drawing, the next goal or image,” MacClements adds.

The series, aptly titled “Late Night Sketch Tales”, was built over the course of the year during the late hours of each evening spent sketching. A culmination of a body of work more aligned with the practice of something you believe in and allowing that process to be your solace.

The exhibition has currently been running at Art Caffe, de Waterkant, Cape Town from the 3rd of October and will go on until the 5th of November.