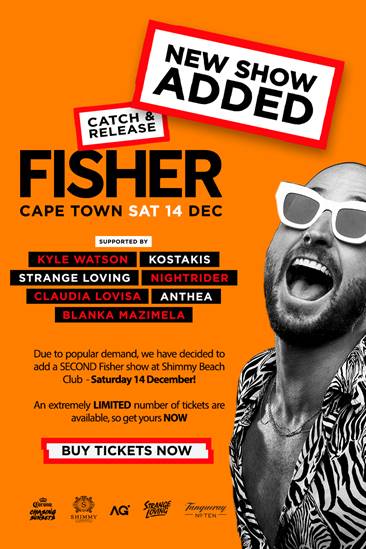 For the past twelve months, the craziest dance floors around the world have had one thing in common; a resounding bass-line that is instantly recognizable and played by everyone, a sound that belongs to none other than the phenomenon known as Fisher. Every December, he joins Corona for their last biggest bang installment at Shimmy Beach Club.

International headliner and Grammy Award nominated DJ, Fisher, will be painting the streets of Cape Town this December. The ‘Losing It’ hit-maker will be performing at Shimmy Beach Club on Monday, 16 December 2019. Due to popular demand, in addition to his performance on the 16th, he will headline another event at Shimmy Beach Club on Saturday, 14 December 2019 – two days before his second performance. This event will feature the likes of Kyle Watson, Kostakis, Strange Loving, Nightrider and more!

‘Losing It’ has been killing dance floors since 2018 and has catapulted the legend known as much for his antics behind the decks as his music, to international superstardom.

‘Losing It’ was nominated for the Best Dance Recording category at the 61st Annual Grammy Awards, and when paired with his incredible energy means that when Fisher comes to town, it’s going to be a party.

Fisher followed ‘Losing It’ with his latest hit, ‘You Little Beauty’, which hit number one on Billboard’s US Dance Club Songs.  The song samples the vocals of late disco and house legend Loleatta Holloway‘s song “Love Sensation” and it became Fisher’s second consecutive number one on the ARIA Club Tracks chart.

Shimmy, the iconic venue chosen for the party, will be transformed for the day to create the perfect environment for Fisher’s brand of magical, high-octane energy.  Think daytime beach chic into sexy night-time naughtiness.

Tickets can be purchased here.