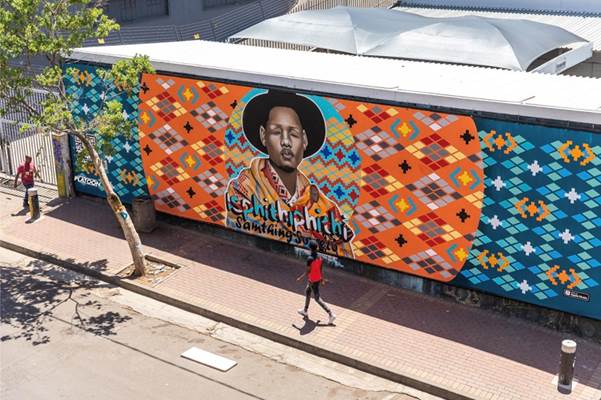 Award-winning musician, Samthing Soweto’s debut album, ﻿Isphithiphithi﻿, was released on September 20th via Platoon to vast critical and commercial acclaim. Isphithiphithi (meaning the crowded or chaotic place) is Samthing Soweto’s labour of love. On Apple Music, the album reached No. 1 on the South Africa Top Albums Chart prior to even being released while still only available for pre-add. Upon release, all 13 tracks on the album immediately charted in the Top 32 on Apple Music’s Top 100 in South Africa.

To celebrate and promote the successes, Platoon, London and SA based artist services company, decided to merge the Worlds of Art and Music by facilitating the creation of a street art mural.

The Mural was painted by Street Artist Dbongz in collaboration with Baz-Art, Street Art NPO, and inspired by the album artwork which features Samthing Soweto dressed in MaXhosa Africa and designed by Tony Mokhononoana – which showcases a culturally rich and colourful proudly South African artist, the perfect inspiration for a mural.

“Being presented the opportunity to paint a mural of Samthing Soweto was a great highlight for me. The aim of the design for the Mural artwork was for it to be in the same spirit as the album art, for it to be one with the music. I wanted it to be such that when people see it, they could relate it to the character of Samthing Soweto and the music that he makes,” expresses Dbongz.

Dbongz adds: “The process of making the Mural was a beautiful and smooth one. Meeting Samthing Soweto at the beginning of it and getting to attend his album launch also played a huge part in the success of the project, as I got to experience the man behind the music and also the music by the man. So, I really got to be in touch with Isphithiphithiand depicting it in the Mural was pure fun and joy and I can only hope that it comes across as such to everyone who gets to see it.”

The Mural can be viewed by the public in Johannesburg on Fox Street in Maboneng until Friday, 22 November 2019. The QR code on the Mural allows people who may not be aware of Samthing Soweto’s music to snap and stream his album on their chosen streaming platform.

Watch the making of the Mural: