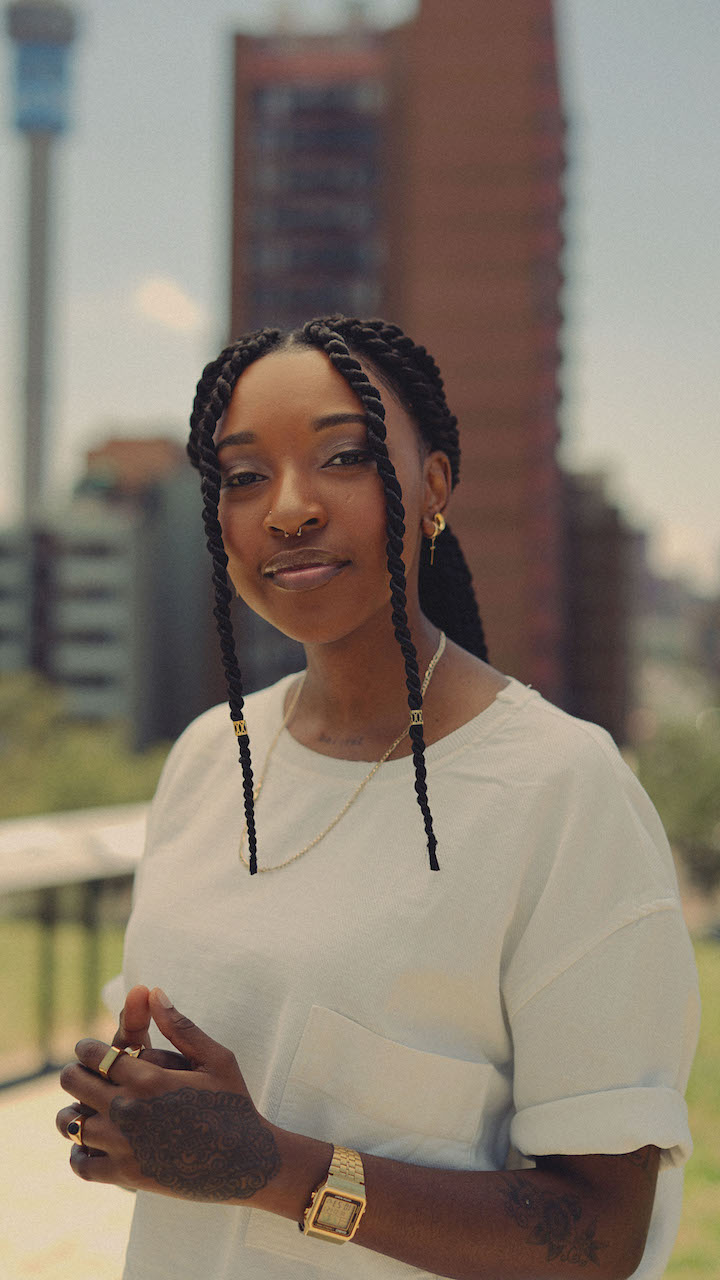 On Tuesday afternoon, the day before the photo shoot, I meet up with a male friend for a mildly boozy lunch and share my excitement about having Karabo Poppy Moletsane as our December cover star. “Why Karabo?” he asks out of curiosity. I couldn’t answer on behalf of everyone at 10and5, but I give him my reasons.

I chose Karabo because I wanted to have someone who looks like me on the cover. I wanted to celebrate her and thank her for being the blueprint of success. I wanted to commend her for representing young black girls from unpopular, sleepy towns like the Vaal.

The following morning, I get introduced to our cover star outside of Constitution Hill in Braamfontein. She greets me with a smile and we walk together to the Women’s Jail – where the photo shoot is set to take place. Upon meeting the crew, Karabo expresses that she is delighted to be a part of a project that is run, shot and directed by black women. A3E artist and photographer, Cole Ndelu shares the same sentiment.

Young black women’s efforts are constantly underlooked across all industries – however, I think this is gradually changing with time. Here I was, sitting across a black girl who designed an AF1 for Nike Global, which sold out in four days. Evidently, this is a good time to be a creative in South Africa.

“I had an average childhood and went to average schools, but I have really always liked art and drawing. Looking back I can see where it comes from because I have always liked watching cartoons as a kid. I used to always draw cartoons,” says Moletsane.

Although she developed a passion for art during her early childhood, Moletsane didn’t think it was possible for her to pursue a career in art become she had never met an artist from the Vaal.

When she got to high school, she did science, visual arts, accounting, and maths. Notwithstanding the fact that she got really great marks for arts and won numerous art awards in school, Moletsane applied for medicine at UCT. In matric, she got an art substitute teacher who clearly saw something in her and encouraged her to check out Open Window.

“I was like art for who? I don’t want to be hungry! I love my parents, I love the Vaal, but if I take art, then I am going to be there forever,”

Out of curiosity, Moletsane and her parents drove to Open Window in PTA. “My mom didn’t even want to leave the car but my dad and I were extremely fascinated. We both didn’t know much about visual communications but were super intrigued. I was excited to do medicine because I wanted to do reconstructive surgery because I thought that was a good way to use my passion for arts, as well as my curiosity for medicine – but I was like, let me give this a try and medicine would be my backup, said no one ever,”

My mom refused to tell her friends what I do because she was embarrassed, her friend’s kids were doing accounting and going into medicine. I remember explaining what I do and my mom’s friend was like “ooooh dipopaye?”

The designer struggled during her first year in design school because she had never used a laptop and camera before, but she is not one to give up easily.

“I didn’t work in university because I didn’t think I was good enough to have people pay for what I was doing. The church that I went to gave me my first design gig. It was their 20th-year celebration and they wanted invites for the event. It was extremely fun because they gave me creative freedom.”

After graduating from Open Window, Moletsane did an internship at Draft FCB “I was supposed to be there a month, but I stayed for two weeks. I wanted to see my color and myself – I wasn’t seeing any black artists and movements in agencies.”

“Whenever I see a space where they ain’t any black women, I want to enter and try to break that. I didn’t think I would ever get into street art, I saw a male-dominated space, so I got into it. People gravitate towards individuals that are brave.”

Moletsane had done some work with Nike through Futura before, so she wasn’t surprised when she received a call from a Nike representative.

“People think it’s such an exciting story but it’s not, ” she laughs.

“I got a phone call for a Nike representative, he said they know that the AF1 has always been a part of my story and they would like me to be a part of their story. I had never spoken to anyone from Nike global before. I was in an uber coming from the beach in Cape Town when I received the call. I couldn’t wait to start working.”

There was no formal brief from Nike. Initially, she was only meant to design one shoe, but ended up designing and producing three designs.

“I created those ideas in three days. I had so many designs and so many stories. I gave them three options and they went for all three because they trusted my storytelling.”

Moletsane wanted to do things that had never been done before. Nike has never done a patch or covered its logo before this collaboration.

So, what are her future plans? Will she ever go back to medicine or pursue something different?

“I am interested in a lot of things – I am into architecture and tattooing. I don’t think I would ever go back to medicine but I am willing to lend my thought process and see how I can help better the system,”

“I started as a graphic designer then went into illustration and street art. I am a musician and play two instruments. I have been in bands in the past, so I am excited about pursuing music and launching my fashion line.”

Karabo is innovative, likes challenges and is always looking for ways to change things. We look forward to seeing more of her work in 2020.