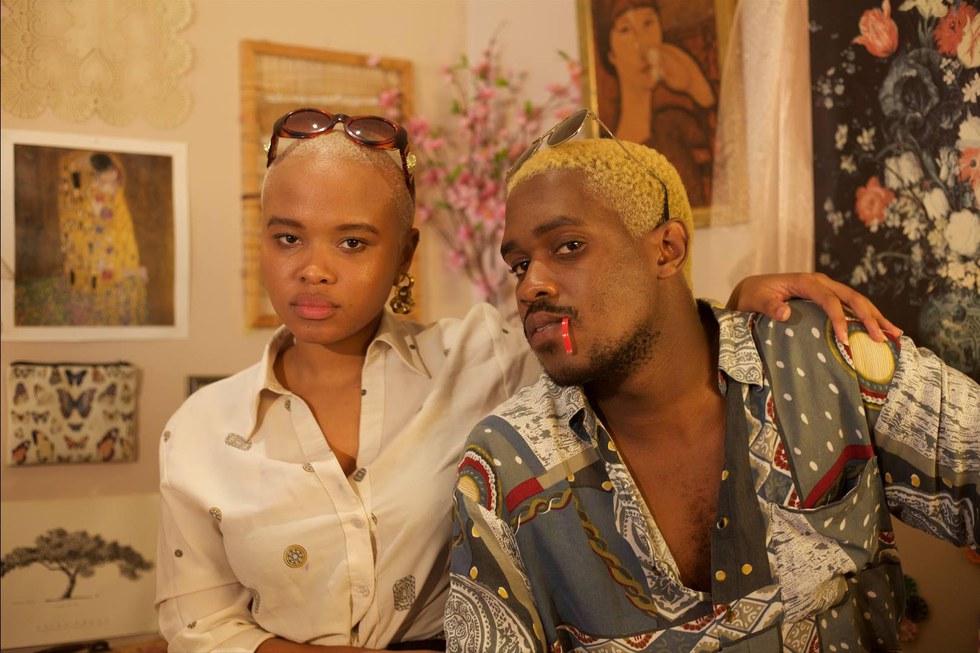 19 Dec Darkie Fiction: Mom & Dad Are Off To Afropunk

Studies show that millennials may be history’s most competent parents. I found myself thinking about this more than a few times as I spoke to Katt Daddy and Yoza Mnyanda, this week. The two musicians who make up Darkie Fiction also happen to be first-time parents, and with three weeks to go until their performance at Afropunk, I managed to speak to them during a rare free moment in their busy schedule.

The transition to working-parent is one of the most daunting challenges to overcome. You return to a world that continues to move on as if nothing has happened, and yet, in the universe of the new parent, things are almost unrecognisably new. For Darkie Fiction, rehearsals, photoshoots and telephonic interviews now have to be scheduled around feeding sessions and nap times. When you throw in preparations for Afropunk Joburg, one of the biggest festivals on the continent, you can be forgiven for feeling a little anxious before getting back to work.

“It was stressful” Yoza explained, as she went into detail about the challenges she experienced in their first few weeks back in the “real world”.

“It’s not just like ‘oh I’ve been away and now I’m back’. I felt like I was in a twilight zone for a while! Only now does it feel like I’ve landed and I feel like I’m present. For the first few weeks it felt super weird, we’d do photoshoots and I’d breakdown straight afterward and didn’t know why. But I think it’s all-natural, and it’s all part of the process of coming back to you after the life-altering experience that is pregnancy and giving birth”.

Navigating an office space, or a “regular” job is difficult enough; but returning to a life of studio sessions, flashing cameras, sound checks and late hours is not for the faint-hearted. Katt explained their current schedule:

“We’re not just preparing for Afropunk, there’s a lot we’re working on. We just did another shoot for Adidas, we’re also working on a new EP which will be dropping in early 2020”.

I was actually saving the EP question for a little bit later, but since he brought it up, I was eager to know more about the follow-up to 2018’s Sobabini: A Mzansi Evolution. Darkie Fiction’s identity is famously rooted in authentically South African sounds which take you through different eras of our musical history and it came as no surprise when Katt declared that this will never change.

“That’s who we are and it’s who we will always be. We used to say ‘we miss those South African sounds’ so we brought them back. But the new EP will also have some new sounds and see us taking a different creative direction”.

Recording a project while expecting your first child must be a surreal experience. In reality, there are some days when it’s less than ideal, as Yoza explained:

“The actual recording of the EP was very difficult, the pregnancy made us a little slower. There were moments where we were more lethargic. For the first three months, I was sick and we were making the EP at the same time. Katt was my hero – constantly motivating me, but from five months on, we were in the zone and we were finally making this thing. It was a slow process but we appreciate it so much that we’re now almost at the finish line”.

2020 sounds exciting, but 2019 looks like it’s going to end on a high note too. As we shifted the subject, I jokingly asked, “So… do you guys have any plans for New Year’s Eve?”

“Not really, it will probably be a quiet one actually” Katt replied between giggles. Yeah right.

“All jokes aside, we’re excited to be performing at Afropunk Joburg, and yes we are playing on the 31st — New Year’s Eve. Actually, in 2017 we attended our very first Afropunk and at that time we watched all the artists and said, ‘we need to be there! we belong there’. But to be here as artists who are still relatively new to the industry is extremely humbling.”

Afropunk artists share a common thread. A proud and loud love for all things black, and all kinds of black. Everyone on the Afropunk lineup brings this aspect in their unique way and Darkie Fiction is no different. This is why, despite their newbie status, Yoza explains that their inclusion on this year’s roster is evidence that they belong “here”.

“We deserve everything that has come our way but we also take the opportunity to learn from the best musicians in Africa, the best musicians around the world. We always watch performances to figure out ‘how can we bring a bit of that into what we do?’”

“This is actually our first performance since March. We obviously took a break during the later stages of the pregnancy and the first few weeks since our baby was born, but all of that energy and excitement that has been building up for months will be unleashed on the Afropunk stage!”

After about 22 minutes of hearing my voice on the loudspeaker, their young resident hinted that it was time to wrap things up with a soft, but short cry. Having heard all I needed to hear, I commented– already predicting their reply — “I hope you’re going to get a baby sitter for Afropunk!”

I was reminded of exactly why millennials make for the best parents when Katt replied proudly, “That was the first thing we arranged when we got this gig!”