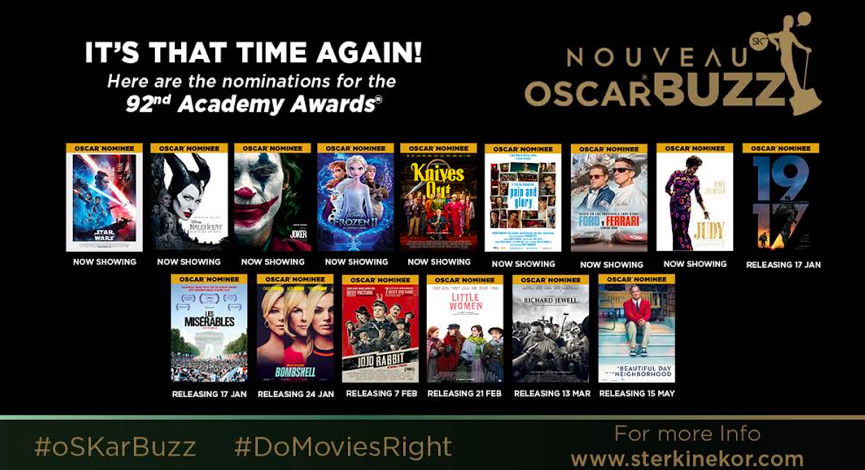 It’s time to celebrate the best films following the release of this year’s Oscar nominations. When a movie makes the Oscar nominee list, it means it’s a critically acclaimed movie. Depending on what it’s up for, it could either be directed by one of the world’s greatest directors, it’s cinematography is breathtaking, or it’s score is a sound experience.

Movies of this caliber should be appreciated on the big screen without being disrupted and derailed by pausing to let the dog in or the hadedas to fly over, or the kids to quieten down.

Experience Oscar-nominated movies on a state-of-the-art Ster-Kinekor big screen, whilst enjoying popcorn, drinks and a selection of delicious snacks.

Judy is an adaptation of the Olivier – and Tony-nominated West End and Broadway play ‘End of the Rainbow’ by Peter Quilter. In this movie, we see legendary performer Judy Garland arrive in London in the winter of 1968 to perform a series of sold-out concerts. This Golden Globe-winning movie is a treat for both music lovers and movie fanatics.

Two young British soldiers during the First World War are given an impossible mission. To deliver a message, deep in enemy territory that will stop their own men, and Blake’s own brother from walking straight into a deadly trap. 1917 has been nominated on over six different categories at this year’s Oscars.

Bombshell, by award-winning director Jay Roach and screenwriter Charles Randolph, tells the explosive story of the women who brought down a powerful media mogul. Based on the real-life chain of events of the Fox News scandal – which saw multiple women accuse former Fox News CEO and chairman Roger Ailes of sexual harassment – it offers a revealing look inside the most powerful and controversial media empire of all time.

The film depicts the life of the blessed Franz Jägerstätter, a conscientious objector, an Austrian farmer and devout Catholic who refused to fight for the Nazis in World War Three.

Jojo Rabbit is an Oscar-nominated comedy-drama film written and directed by Taika Waititi. The film is about a young boy in Hitler’s army who finds out his mother is hiding a Jewish girl in their home, it is based on Christine Leunens’s book ‘Caging Skies’.

Claire Smythson, the wife of the renowned abstract artist Richard Smythson, is plunged into a late-life crisis when her husband is diagnosed with Alzheimer’s disease and is in danger of not completing the paintings for his final show.

A young aspiring writer at the bottom of his addictions is interned in a facility center to face his traumatic past.

Little Women is an American film written and directed by Greta Gerwig. Four sisters come of age in America in the aftermath of the Civil War. It is the seventh film adaptation of the 1868 novel of the same name by Louisa May Alcott. The film has been nominated for Original Score, Best Picture, Adapted Screenplay, and Costume Design.

American security guard, Richard Jewell (Paul Walter Hauser) heroically saves thousands of lives from an exploding bomb at the 1996 Olympics but is unjustly vilified by journalists and the press who falsely report that he was a terrorist.