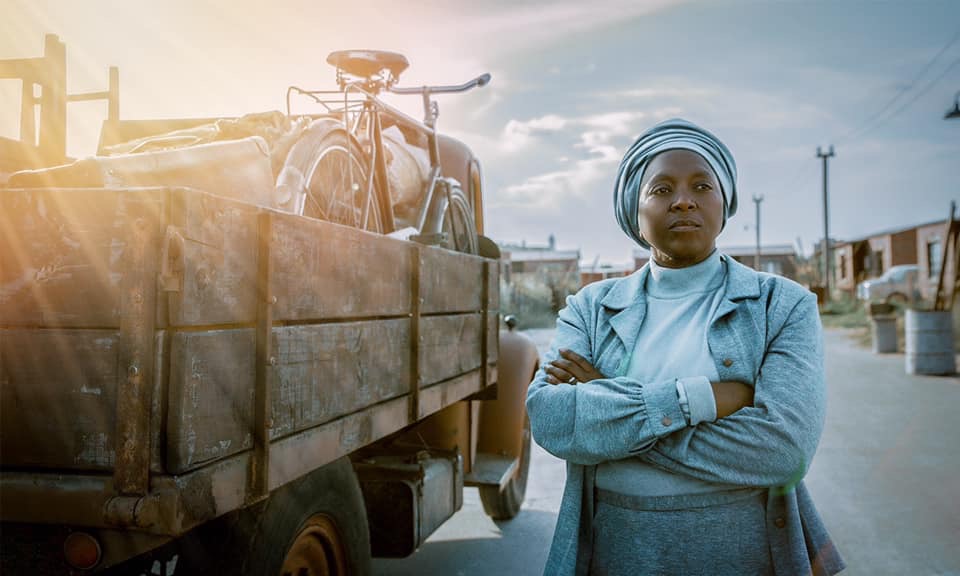 Discover the epic, moving true-life story of an ordinary woman in extraordinary circumstances in this new South African film coming to cinemas on 31 January. Based on the celebrated novel by Elsa Joubert, houseworker and resilient Afrikaans speaking iXhosa mother, Poppie Nongena desperately tries to keep her family together by navigating the day-to-day struggle against inhumane government pass laws in 1970’s South Africa.

Set within a period of immense upheaval in South Africa, this multi-generational legacy film provides an intimate glimpse, through Poppie Nongena’s story and into the life and times of South African women who were forced – by arrests, fines, and forced removal – to leave their homes and resettle in remote areas designated as black homes.

With accommodation being a perpetual struggle, Poppie finds ‘live-in’ jobs, resulting in her seeing her children briefly during weekends. When her husband, Stone, becomes too ill to maintain his job, she is deemed by law to be an illegal resident in her own country and is instructed to leave Cape Town.

By moving from house to house, applying for permits, monthly extensions for permits, fortnightly extensions of extensions, appealing through employers and social workers, Poppie engages in a desperate race against time to try and gain permission from authorities to remain in the mother city while a storm of student riots threaten to spill over into a civil war.

Caught in the crossfire of her children’s needs, her husband’s illness, community anger, and repressive laws, she is finally forced to give in just as the 1976 riots for freedom erupt. Poppie realises that the time has come to hand over the baton to the next generation and to find meaning in her struggle.

Poppie Nongena was made possible through the support of KykNET, M-Net, Marche Media, The Department of Trade and Industry, Arco Venture Capital, and is distributed by Filmfinity.

Poppie Nongena will be released nationwide on 31 January 2020.