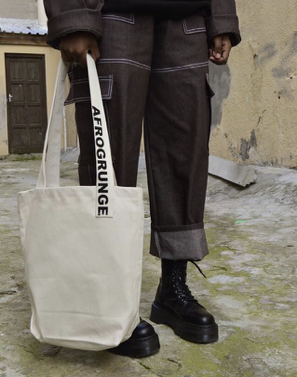 Posted at 14:11h in 10and5, Fashion, Interviews by micheedwards
1 Like

Raging against the norm, AFROGRUNGE is creating a new subculture through street style. Founder, Anita Hlazo launched Afrogrunge back in 2017 while completing her Fashion Design degree at Cape Peninsula University of Technology.

She infused her black cultural identity with an interest in the Caucasian-established subculture Grunge.

“Initially Afrogrunge was a word I put together to identify as. Aesthetically I was not just afro, I was grunge too,” she says.

Having conquered prime spaces early in her growing career, Hlazo exhibited her work on the runway of SAFW in 2018 and has since added prestigious achievements to her portfolio. Shifting cultural paradigms, Anita’s work celebrates the ‘alternative black child’ choosing to venture into aesthetics outside the generally believed correct ones.

We had a chat with the designer about her stirring creative journey.

Afrogrunge is now a clothing brand that is inspired by people of colour who venture into aesthetics or subcultures that aren’t necessarily associated with their culture or blackness. Think of terms such as blipsters, afro-goth, afro-punk, etc.

After being accepted to study fashion design at the Cape Peninsula University of Technology, we were shown our own fashion ‘computer’ lab and that’s when I created a blog on Tumblr that I used to document myself as the person of colour I wanted to see. A part of me hoped it would be seen by someone else that felt the same way, and when they saw me, or the term, they would feel like a part of something.

Describe your design style and the process of your garment making.

When I design, I usually come up with a concept first.

I think of what I want my end goal to be for the collection. I tend to focus on what inspires me at the time of conception and think of who my work would speak to, how I want those people to feel, react and interact with my work.

When that process is done, I do theoretical and pragmatic research to support the concept. Once that is done, I start sketching designs, do pattern work and sampling. When that is all perfect, I start on the final garments.

What have been your most memorable moment thus far?

My most memorable moments in the two years have been dressing Moonchild Sanelly – meeting her was enough. I remember a friend of mine pitched the idea to me, we were discussing who in a bigger space, would be able to reflect Afrogrunge well. We both decided on Moonchild, however, I couldn’t see myself approaching her at the time. So I finally contacted her, and her agreeing and being totally cool about it made me realise I should go for things I set my mind to more often without much hesitation.

Overall just being in spaces I never thought I would be in, like featuring on ComsopolitanSA, my clothes appearing on both Vogue Italia and British Vogue, as well as the Afro-Punk page.

As a creative, what was it like getting a handle of the business side of things?

I have learned that I don’t want to be in a position where I post my amazing designs but when a buyer wants to purchase them, they aren’t available for sale.

I have had to come up with a business model that matches my capabilities, both physically and financially. I have learned that you can’t just rely on being a creative when running a business, you have to be more of a business person than a designer. You’re the same person that needs to attend a big business meeting and come back to your studio to take out the trash. One needs to be versatile and wear many hats. Being in my second year in business has been easier, mentally and emotionally, I am learning and growing to be better and understand my limitations without being too harsh on myself.

Any recent projects you are working on that we should look out for?

I am working on a new collection that I will release over a period of time so that I am consistent and can mass-produce each look that I share on my pages. So this project aims to test out my new business model and tests my consistency and how my market will react to it.

What is something that you would love to achieve through your business?

Financial stability, I would love to be able to afford to produce a lot more garments of each style at a quicker rate. I would love to hire someone to assist me, because I want to do and achieve more things. I generally want to create employment. I think that’s one of the reasons I chose to start my business, I mean, I had the option after university to work for a big brand but I chose to be a businesswoman so one day, I could create employment.

This is off-topic but I think a lot of us should think that way in South Africa, it’s not easy but if a lot of us tried, there would be a higher number in business success rate which means more employment.

What would you say is your favorite garment out of all your collections?

Definitely the Denim two-piece Moonchild Sanelly wore. Instead of designing a regular denim jacket and styling it off the shoulder, I thought of just making an off the shoulder denim jacket. It’s also the very same outfit that was on Afro-Punk’s Instagram page. It was shot by Trevor Sturmaan and landed on British Vogue.

What’s next for Anita Hlazo?

11. Where can we purchase Afrogrunge?

Shop online, on Afrogrunge.co.za or if a person is based in Cape Town, they can shop my clothes inside the Black Bone Collective on 353 Albert Road, Woodstock.