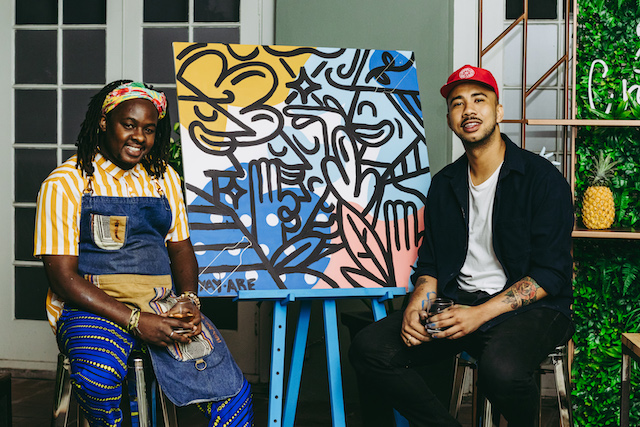 Posted at 11:00h in 10and5, Bombay Sapphire by Thabang Buthelezi
0 Likes

The Stir Creativity campaign speaks to Bombay Sapphire’s innate character as a premium gin that brings out the creative in everyone – both complex and versatile – it offers itself up as a blank canvas, literally inviting anyone to unleash their creativity in how they want to mix up a cocktail.

This first phase of the Art-Tender Tool Swap saw a group of young creatives – a visual artist, a fashion designer, and a commercial illustrator, engaging in an exchange with some of the country’s finest young bartenders, each tasked with using one another’s instruments to fashion an entirely new piece of art and a unique cocktail. The entire engagement was recorded into audiovisual vignettes – the Art-Tender Tool Swap video series.

For the second installation of the series, Russell Abrahams teamed up with Peter ‘Milk B’ Lebese, popularly known as ‘Thee Gintleman’.

Russell Abrahams’s creative career traces back to 2011 when he began his studies at CPUT. His art has developed tremendously over the years, thus resulting in him working with different brands and collaborating with the likes of Mini SA.

In 2018, the commercial illustrator partnered with an international fast food joint Burger King, and shortly after that, he was named one of Design Indaba’s Emerging Creatives, which exposed his tactile, neoteric and gleaming art to a much wider audience.

Born in Johannesburg and now based in Cape Town, Peter has gained popularity as a bartender who not only maintains an infectious energy and spirit but loves to experiment while being extremely passionate about what he does.

Evidently, the Art-Tender collaboration looked like something that would be right up Russell and Peter’s alley. The creative gods were definitely smiling at this duo, bestowing them with the best creative ideas possible.

Russell and Peter are required to merge their skills and create an art piece, as well as a unique Bombay Sapphire cocktail which represents both their creative styles.

In the video, we get the pleasure of watching the two acclaimed creatives come together and work side by side in deciding what they could create as a duo. To stir up his inventiveness, Russell decided to base his artwork on the Kaapse Klopse festival.

He celebrates the bright and colourful traditions of his friends and family by being a part of the celebration’s practice sessions and final performances. His artwork reflects the pure joy experienced at Kaapse Klopse, also referred to as Tweede Nuwe Jaar. As many as 13,000 minstrels take to the streets of Cape Town garbed in bright colours, either carrying colourful umbrellas or playing an array of musical instruments. People consider the festival a rite of renewal that has been shaped by the city’s history.

Art is a mirror of society and seeing the Kaapse Klope being celebrated in different forms is the type of content we all love to witness. Peter also draws inspiration from the festival and created a Bombay Sapphire spin-off on the ‘Clarified Milk Punch’. He named the cocktail The Kaapse Bliss ( The Cape Bliss ).

We didn’t want you to suffer from FOMO, so here is how you can make ‘The Kaapse Bliss’. You will need about 60ml of Bombay Sapphire, 30ml of cranberry & cinnamon tea, mix that up with some pineapple juice, add 15ml of lemon juice, put in 25ml of almond nut syrup, 3 dashes bitters and 50ml of coconut milk. And there you have it. Stay tuned to see who’s next!