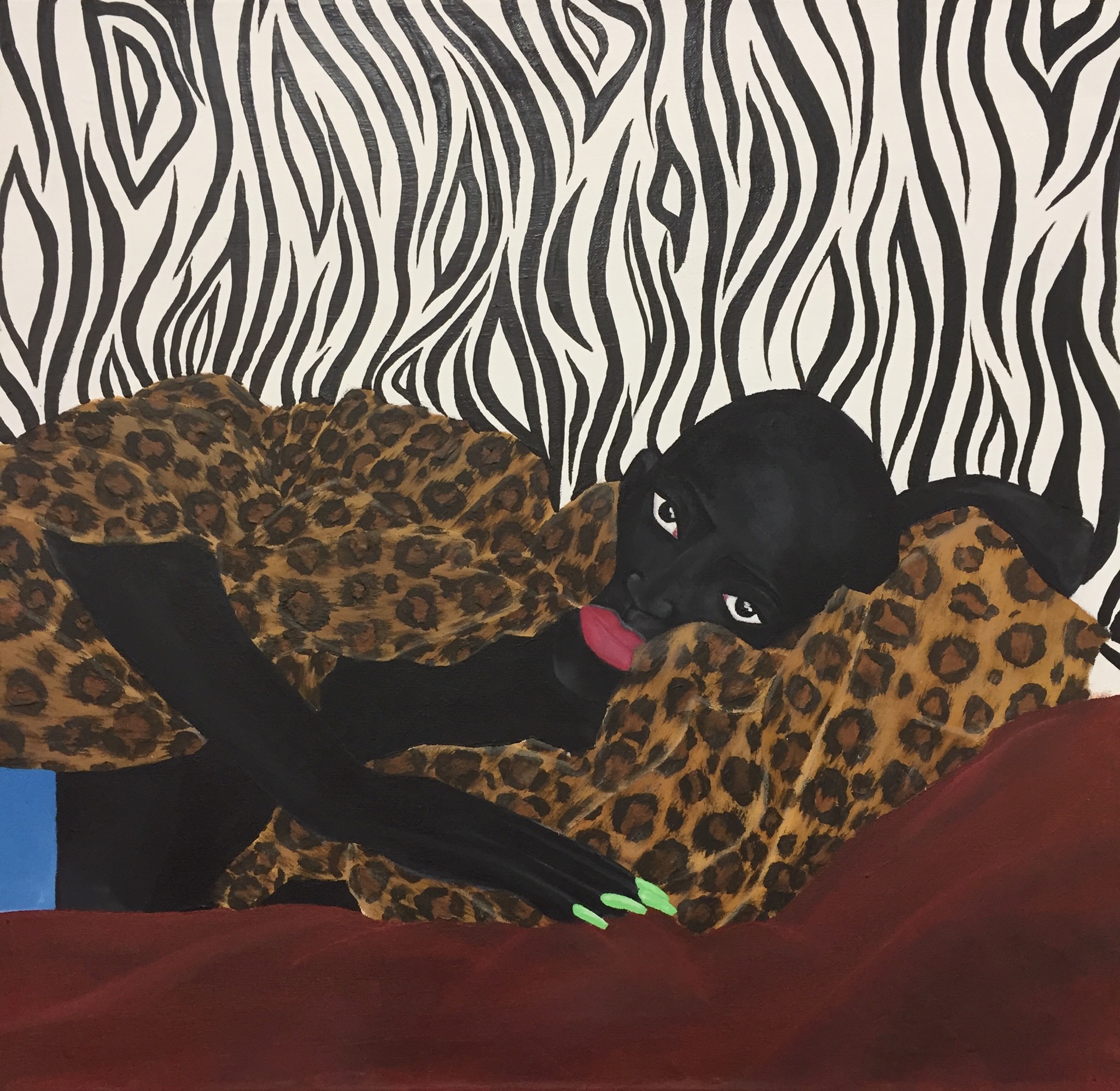 Personal research on the abovementioned has led Tshabalala to the realisation of the positioning and representation of black women in paintings as either invisible, inferior or marginalized. Although some of these narratives exist, Tshabalala’s work delves into the many aspects that have not been addressed and preserved for the future generation. With this in mind, her work particularly represents the black woman’s strength and vulnerability.

Tshabalala uses black skin tones on her figures as a tool to emphasise the blackness of the figure and in turn, make the figure stand out while either contrasting or matching with the different backgrounds. As a black female, she chose to represent the black female body as she felt it would be relatable and easier to address what she was aware of first before attempting to address other issues or narratives.

Tshabalala has shared five of her favourite creations and the concept behind each of the pieces.

The work Thinking bout’ you was the first work in my new body of work. The initial purpose of the work was to serve as an affirmation and reminder to myself. Feeling a bit distanced from myself, I felt an urge and need to represent myself in a position or state that would serve as the woman I believed or desired to be, which is a confident, bold and unapologetic woman. To this day, I still revisit this work to remind myself of my journey thus far and all the possibilities that one can attain by simply being themselves.

“Cow/Mother is a celebratory series that speaks about turning what was initially bad into good. Thinking about the title itself, I was looking at the usage of animalistic terms to downgrade or make references to female bodies. The term that stood out the most for me was the use of the term ‘cow’ to shame women, whether it be physically or emotionally.

Thinking about both the creature itself and the woman and their societal role; that of the cow as a sacred high valued animal in cultures such as the Nguni or even Eastern practices and religions, that of the mother as a caregiver and the closest being to nature itself. I felt that the term and association were highly misused and that there was a deep need to correct this. In the work, the figures are seen in poses that represent a sense of confidence, self-awareness, and self-love. The figures do not shy away from themselves nor their cow title but instead, embrace it and take ownership of it whilst restoring its value and sacredness.”

“Zandile is work that is meant to encourage the black female body to take pride and charge of their sensuality, sexuality and their bodies especially in a time where women who live and express themselves boldly are muted or looked down upon. I made the choice of using the colour black for most of the composition as a way to emphasize the figure’s blackness and simultaneously make the figure blend in with the background. In my research for my work, I have found that this was done numerously in historical paintings whereby the black female figure is placed in the background and woman of different colours in the front to represent beauty.

In this work, I refer to all those women placed at the back, except that here the figure is being used to symbolize her own beauty, and takes charge of her own sensuality whilst further daring and challenging the viewer to look at her as she does the same to the viewer.”

“Chin up is a work that was done to give comfort and reassurance of a better future or condition than the present one. The work is meant to be a reminder to the viewer and to myself that distress and sadness do not mean weakness but are instead just fleeting states, and so one should let them pass through the body without allowing these emotions to consume them. In other words, one should transcend beyond these states. This is a work that sits as a reminder for the need to reserve strength and assurance for oneself.”

“Going back to thoughts of the positioning of a black woman as servants, I noticed an internalized pattern and need to consistently be busy within her household. This bothered me as I would find that busyness was starting to read as a black woman’s thing and whenever she would sit she experienced some guilt as she has been taught to always find something to do (especially of a domestic nature).

The work Glenda depicts my mother lazily sprawled on the sofa in deep contemplation after a long day of work. I felt the need to capture and immortalize this moment because she knew that this was a fleeting and short moment, and felt that it should be normalized and internalized also. With this work, I hope that the viewer understands that it is okay to relax, and pause their busy (working) lives in order to breathe and reconnect with the self.”