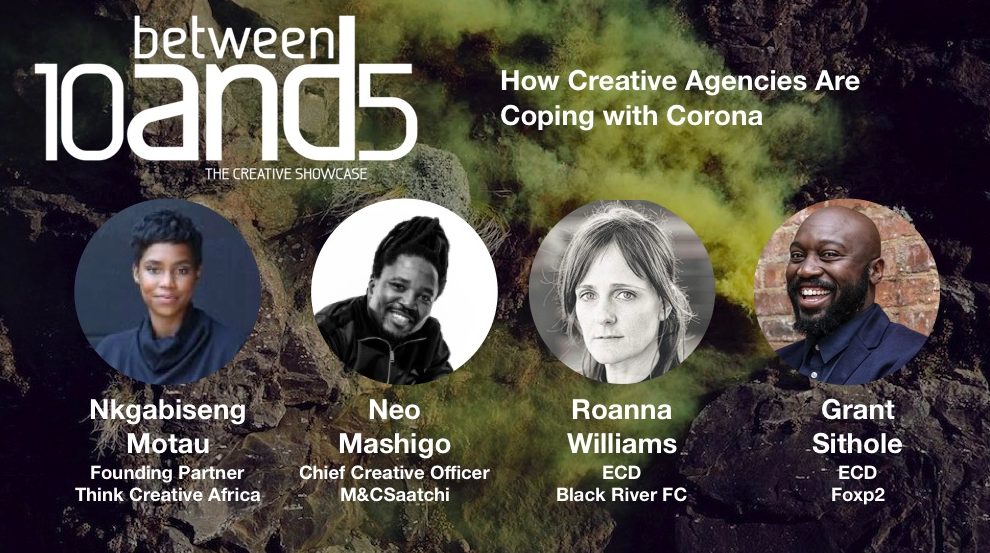 07 Apr WATCH: How Creative Agencies Are Coping With Corona – Recap

The topic for the talk was ‘How Are Creative Agencies Coping with Corona, given how the pandemic has pushed the government to enforce a national lockdown to combat the spread of the disease.

Joining Uno in conversation were four capable guests with their own impressive resumes, namely:

Neo Mashigo, the Chief Creative Officer for M&C Saatchi is also the co-founder of I See A Different You Agency. Neo is invested and heavily involved in SA’s creative and advertising industry – he sits on the committee of Creative Circle and is the board member of the Loeries awards.

Nkgabiseng Motau, the co-founder and Chief Creative Officer of Think Creative Africa. She began her career nine years ago at Ogilvy Johannesburg as an intern. Since then, Nkgabiseng has been breaking ground. In 2018, her agency won the Financial Mail AdFocus New Broom Award, which solidified her place in the industry.

Roanna Williams, the Executive Creative Director for Black River FC, with over 20 years of brand communication experience. She has won numerous awards from Loeries, Cannes Lions, Apex’s, One Show Pencils and D&AD’s. Williams has judged prestigious awards like the Loeries and Creative Circle Awards.

Grant Sithole, who has worked at FCB Africa, Ogilvy, and Manther, Bakone, and Avatar. He recently FoxP2 as the ECD, and like the rest of the panel speakers, he boasts a number of awards including a D&AD, Cannes Lion, Cristal and many more. He has done award-winning work for acclaimed brands namely Wimpy, and Coca Cola to mention a few.

In regards to how they have been responding to the pandemic, Neo states he had been proactive, stating that his company enforced remote-working as soon as the news spread about the arrival of the Coronavirus in the country. One issue that arose for him though, was the different network situations that employees had at home, a sentiment shared by Roanna. Amongst the issues that were brought up was what Grant encountered, which was the lack of organisation and consistency that comes with remote working, and how that affects one’s time management:

“It feels like if you’re not managing time properly, back-to-back you are constantly talking to people about things. Then, there’s a weird by-product of that, that it becomes more meetings than actually doing the work. ‘Cause I think there’s an anxiety that comes with ‘what should I do now?'” Conversations last slightly longer because people are not really sure what they’re supposed to be doing.’

They also touched on how working with clients and freelancers has changed, with Nkgabiseng elaborating: “Briefs have changed. The number of briefs has changed. The way that clients are looking to do work, sometimes, is really fast and cost-effective. So we are having challenges there.”

The conversation was both insightful, and entertaining. Stay tuned for details of our next one.