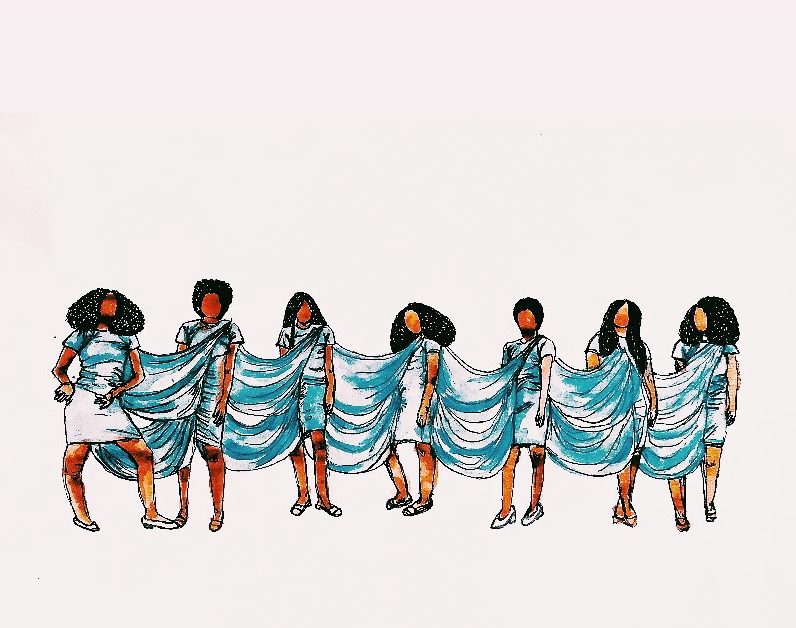 12 May 20 South African Womxn Illustrators On Our Radar

South Africa, like many other African countries, boasts an abundance of creative talents. We wanted to shine a light on a few womxn illustrators we believe are crossing boundaries while creating great pieces of art.

Cape-Town based illustrator, animator, and graphic designer Khanyisa Klaas, combines the intricacies of both minimalism and surrealism – a homebase for her now unique design style. Fortunate to be surrounded by phenomenal women who all contribute to fruitful conversations, Khanyisa took away the authenticity and beauty of their minds through those interactions. You see her appreciation for women as she employs designs of punchy colours, witty touches, and cartoon-like devices.

Lethabo Huma is a Pretoria based illustrator and ‘digital painter’ as she describes herself. The 21-year-old artist displays expressive portraiture with the fusion of stars, formed lines, and soft background hues. Drawing inspiration from elements she can resonate with, Huma uses her work as a way to portray her emotional and mental response to life’s experiences. She ultimately aims to evoke emotion and thought in her viewers.

Illustrator, Ofentse Aobakwe aims at defining beauty beyond what one sees. The passion she now holds was sparked by her personal experiences and perspectives of life that have led up to now. Ofentse looks to art as something that she is drawn to and equally reactive to.

Durban based artist Sinomonde Ngwane brings forth emotive illustrations from a place of relatability. Her modest artworks marry words with visuals that take inspiration from personal experiences and those of others.  An avid reader of poetry, Sinomonde looks to words as an influence.

Nokwando Themba is a Zambian-South African Contemporary WOC Illustrator/Visual Artist, creative entrepreneur, and lifestyle blogger. She describes her pieces as a social experiment in which she explores the complexities and differences in the faces she meets. Her work stands on the Visual Anthropology of beauty and serves as advocacy for womanism and feminism. Nokwanda shows her deep concern of Women of Color from different global ethnicities as well as the social and cultural representation of her subjects.

Full-time illustrator Phathu Nembilwi finds happiness in her artistic expression. Highly influenced by strong female figures in her life, she features women exuding grace and self-ownership followed by her floral, tropical background aesthetic. Her work celebrates the natural beauty and strength of women, as they go about normal everyday activities.

Fiona Kwizera is a first-generation South Africa born to Ugandan parents. Her comics are based on her life and mostly feature everyday situations with a funny twist or an unspoken truth. Playing the protagonist of her story, the artists’ work is relatable to many of us as it explores circumstances such as a woman on a quest for a career break, the ‘perfect’ body, and true love.

Phila Hillie places women at the center of her inspiration for her work. As an architecture graduate, she interrogates the various avenues of how her subject matter can be represented. With loud color and the use of simple shapes as seen in her work, she aims to tell the stories of women, their struggles, beauty, and everyday way of living.

East London-born and Johannesburg-based designer and illustrator Sinalo Ngcaba holds scintillating illustrations to her name with a tone of unplumbed, contrasting collages that play on internet trends. Valiant lines and shapes with defined edges describe her minimalistic modern style, which she achieves digitally. Snalo opts for loud colors and shades over textures to convey mood.

Johannesburg-based artist, Suzan Mbhali Manzini’s work highlights the importance of self love. After receiving positive feedback for her work on social media, she started her brand, ForMeByMe, at the end of 2017. The brand aims to convey the message of self-love in a world that mostly idolizes what is seen over social media. ForMeByMe creates personalized illustrated phone cases, T-shirts, portraits, and laptop stickers. Suzan was also a 2019 Design Indaba Emerging Creative.

Ga-Rankuwa born illustrator, Neo Mahlangu is an artist who explores fine art and digital creations. In 2019, she became the youngest female to design two R2 coins for South Africa. She was one of many who were part of Design Indaba’s Emerging Creatives for 2018 and was chosen to showcase her work at the Absolut One Source Festival of African Creativity.

Kgabo Mametja, also known as Saint Rose is a Johannesburg-based illustrator and graphic designer who creates bold, unapologetic illustrations of women – particularly black women; celebrating inclusivity, womanhood and the many things in between. Mametja’s feminine interpretation of beauty and aesthetics translate into bold images with a sultry appeal that blurs the lines between traditional taboos and her intrinsic essence.

Karabo ‘Poppy’ Moletsane is no stranger in the creative and design space. Over the years, the well-known street artist and illustrator has made a name for herself from what started off as a hobby and soon carved into a career. She has managed to work with a number of world renowned brands; such as Netflix, Nike, Ponds, Coca Cola and WeWork Johannesburg.

Through her work, Moletsane’s aims to preserve the African aesthetic, and is representative as well as inspired by day-to-day South African culture.

Zinhle Zulu is an award-winning Johannesburg-based illustrator who received her Bachelor of Arts (Honours) in Visual Communication from Open Window Institute. Zulu has had the opportunity to showcase her work in multiple exhibitions and has received a number of accolades; including a Gold-Craft Loerie award for Illustration in 2017 and forming part of the Design Indaba Emerging Creatives Class of 2019.

Nontokozo Tshabalala describes herself as an Afrofuturistic graphic artist who experiments in different forms of art and design to tell stories of people from the African diaspora, as well as other people of colour. In 2018, the University of Johannesburg Honour graduate was awarded a Sweden Institute Study Scholarship (SSIS) – along with nine other South African artists – to study towards her Master’s Degree.

She is also the co-founder of Mam’gobozi Design Factory – a South African design studio celebrating the African identity.

Born and raised in Durban, Kwa-Zulu Natal, Nosipho Nxele is an illustrator, graphic designer and art director. Nxele is passionate about women empowerment and breaking stereotypes carved on women by society. Expressionism, simplicity and fresh creativity is what she aims to achieve. She is the founder of a project titled ‘The Forbidden Women’. With this project, she aspires to tell her stories those of many other women through innovative ideas.

Cape Town-born graphic artist and illustrator, Thandiwe Tshabalala proudly celebrates South Africa through her work and addresses issues relating to politics, race and poverty. The feminist illustrator’s bright creations are not only a reflection – with a splash of humour – of her interests, they also challenge society’s perceptions of women and the everyday life of South Africans. Tshabalala is well-known for her body of work titled ‘ABCs of Xhosa Names’; a series of GIFs celebrating Xhosa names.

Balekane Legoabe is an illustrator and animator based in Pretoria who explores loneliness, depression, and despair as an identifying contributor to her identity. In 2019, she was awarded the StateoftheART Gallery Award.

Rendani Nemakhavhani is a multi-talented artist; dabbling in illustration, graphic design and art direction. Nemakhavhani’s work is inspired by the people of South Africa and the rest of the world.

Itumeleng Makgakga, or Terracotta Cells as she is known on social media, is Johannesburg-based interior designer and illustrator who creates aesthetically pleasing portraits of notable individuals. She creates her striking illustrations in black and white.

Image Credit: All images sourced from the artists’ Instagram and Behance pages.