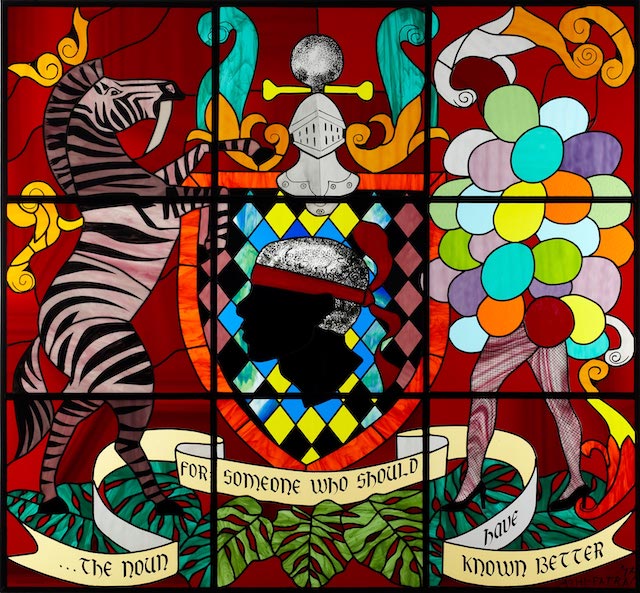 Posted at 15:08h in Art, Interviews by lelowhatsgood
0 Likes

The artworld is faced with a new challenge during the Covid-19 pandemic. This new time has forced us to be more agile, creative, and keep steady.
This didn’t stop Athi-Patra Ruga from releasing a two-part saga alongside WHATIFTHEWORLD.

‘Dramatis Personae’ also establishes Ruga’s avatar, Nomalizo Khwezi, a child prodigy working in an Azanian publishing house who finds herself in a predicament with her lover, Nestra Brink, the wife of the company’s owner. The saga dabbles in consciousness and mythical aspects of Azania.

Ruga’s artistic approach to creating myths and alternate realities is both profound and personal. He is one of the fewer artists in South Africa whose work is based on myths as a response to the contemporary climate.

I chat with Ruga on the deeper connection and themes surrounding stained glass, Azania, myths, ways the art world can work around the time of Covid-19, and the Lovedale Press fundraiser project he’s working on with Lesoko Seabe.

Please share more about the Interior Exterior and Dramatis Personae and how the two ideas came about?

I started in 2013, thinking around the medium of stained glass, also at the time, I was deep within performance art and also working with ‘The Future White Woman of Azania’, which was a send-up on ‘nationalism’, how nations are founded and who is left outside the national founding myths. I’m very obsessed with myths, because [I think] that’s how stories are born and that’s how we make sense of things that are quite big. I did a Coat of Arms for Azania – which for me, [Azania] is also a send-up of a hyper-macho, very exclusionary idea of coming to Africa, the coming South Africa or post-liberation. It always alludes once again the people who come from communities that affect me – these communities are deliberately black, queer, and also deliberately femme.

We have a wonderful constitution but it also betrays itself. So that’s what ‘The Future White Woman of Azania’ was about, and that’s where the stained glass medium comes in. I left it for about five years, while I concentrated on making larger-scale performances, more theatrical works and also focusing on film. ‘Queens in Exile’ happened in 2017, and then in 2018, I took it up again for a show that I did at Somerset House and also at the Hayward Gallery in London. How it moved from ‘The Future White Woman of Azania’ where I did the Coat of Arms to what it is now, is me wanting to explore and institutionalise myself. Without having to sound arrogant or defeated.

I’m very aware that the history [of the medium] is Western, but it is also how power has been exercised in places like South Africa during colonisation. We also have these stories of how Jesus illuminates through a [church] window. I’m from the Eastern Cape, so evidence of the 1820 settlers is very hot in monuments there. I’ve always felt that as an artist or a creative kid I could always change that by putting my community there.

The lockdown has really affected how we get to experience art on a more personal level in galleries but has the internet or the virtual world changed ways in which we can still engage in artworks?

The face of the art fair economy has been changed. The gallery space and the way we view art has also been changed. This is a period whereby the industry and its stakeholders have to just take time and reflect on how they’ll be showing art. I don’t feel that’s necessarily dependent on social media or dependent alone on creating virtual spaces. Artists can also take it upon themselves to be the point or the plaza where they can showcase their art – by focusing on their story. We cannot travel or be collaborators in the residency economy or the summer festival economy between June and August. Big questions are being posed now – are you making art? What stories are you going to be telling? How we’re going to be storytellers is gonna go beyond the idea of wanting to replicate an exclusionary space like the white cube… and by a white cube, I mean the gallery. Those politics around those spaces are going to be interesting.

I love that question.

At a time like this, we do need to reflect on the silence of this lockdown and how it made the falling of great trees such as publishing houses much louder. We have Bona Magazine, which is the latest [fall]… a magazine where you could read a two-page fictional story in isiXhosa or Southern or Northern Sotho. Indigenous languages had those sorts of publications to fall back on, and it’s a tradition that goes back to as far as I know. So now, that’s coming to a close. It’s a heavy reflection as well on what is happening with Lovedale Press, which is 200 years of telling stories by black people for black people in their own language. Black artists collaborating with black writers on covers of books. This is the sort of stuff we dare not lose because we’re losing so much already.

For me, it’s such an indictment on what we have done with freedom. We’re so blameful during this time. So, Victory of Word then becomes where Lesoko Seabe and myself pay tribute to the people who have been taking care of the space. We want to preserve the languages and the stories, and not only space. It’s black intellectual property. If we’re going to be losing so much during this time, we might as well hang on to the stories that have been left as a vow. So, who are we going to blame if we lose this? We have no one to blame but ourselves.

To make a donation to Lovedale Press or help out in any way, please visit https://victory-of-the-word.raisely.com/ to learn more about the campaign.