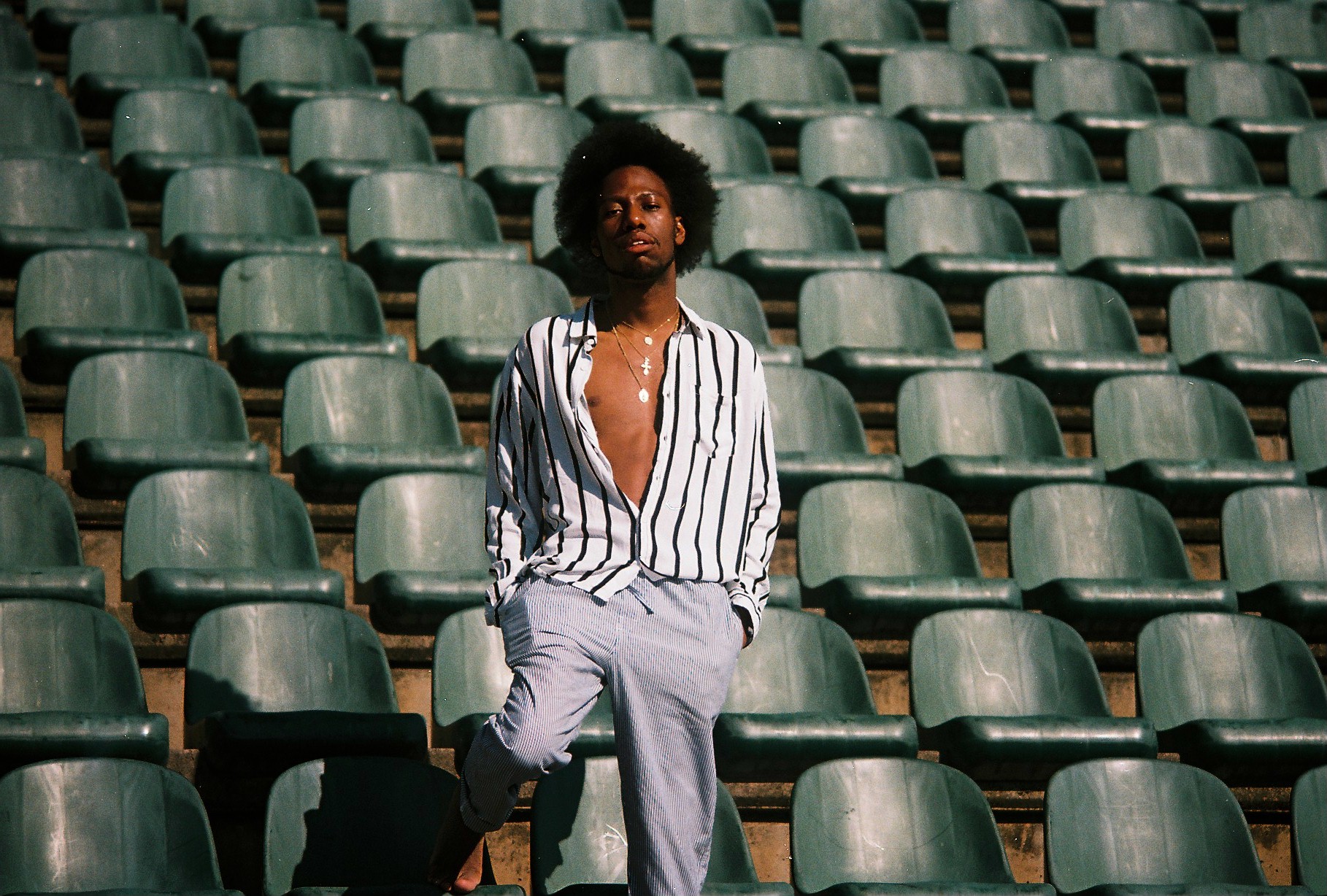 Posted at 11:38h in Interviews, Music by lelowhatsgood
0 Likes

“One chance is all I need to show you I’m the man you seek / Hidden desires, I am the fire to spark you up…” sings Moonga K. on a woozy beat laced with hypnotic percussions, declaring his unrequited love. His sinuous, stunning voice commands attention on most of his songs, matched with emotional lyrics, Moonga knows exactly how to win any listener’s heart.

Zambian-born and Johannesburg-based vocalist, Moonga K. has his eyes set on remaining true to his artistry and creativity. After successfully releasing his debut EP ‘Free’ three years ago which was celebrated for its vivid fusion of neo-soul, alt-pop, and elements of traditional R&B, the body of work was selected for the Apple Music New Artist Spotlight. Soon after that, Moonga K. released another LP called ‘Wild Solace’ in 2018, expanding his range of soulful sounds and experimenting with different genres.

In 2020, the young artist is more confident in his sound and has released another EP ‘an ode to growth, pt. 1′. I had the pleasure of chatting with’ Moonga K about his journey, learnings, and future plans.

How have you grown as an artist since you released your first EP ‘Free’ in 2017?

I’ve become a lot more confident in my artistry. With ‘Free’ I wanted to introduce myself subtly, and I was very reserved at the time of release, however, over time, with performing at festivals and writing more music, I now know that I want to be an open, honest and vulnerable black man.

Speaking of growth, you recently released your second EP ‘an ode to growth, pt. 1’, how has the journey been from recording, songwriting and being in charge of your own creativity?

It was quite tumultuous, I won’t lie. After we released ‘Wild Solace’ in 2018, I was quite stuck with where to go sonically. With that record, we explored a lot of genres that to some might not seem like a cohesive piece of work and it did have an effect on the kind of music I felt was marketable or mainstream enough, and at the time I felt like going the pop / electronic route was the right approach. We wrote about 10 songs at the time that just were not me, and I felt awful because we put so much of our energy into that music, but I was coming from a place of trying to appeal to the ideas of success generated by the powers that be, and it drained me of my passion.

I took a step back and evaluated, and realized my love for music started with soul and R&B, and that was the foundation of an ode to growth.

Also, recording at Maboneng Studios was the best fun; Quintin Christian (the recording engineer) and I were in there for hours, recording a million takes until we got the perfect melodies and the songwriting approach was just speaking truth to the power of my experiences of living, loving and being.

“heartbeat 8” has a music video which you’ve conceptualized for a long time, can you please share some more about the coming of that video?

I had just under R10k left for marketing and I knew the only thing I wanted to do with that money was make a music video, and anyone in the music or film industry will tell you that R10K is nothing, but I took a chance and contacted my good friend Swartkart, who I’ve been conceptualizing videos with for two years (and Thomas & Gavin from Drawn to Light Productions). We met up, discussed ideas back and forth & hustled all we could to film “heartbeat 8” in four different locations, in two days. We got sponsored lenses from Fujifilm which was wonderful, and my beautiful black cast was more than willing to be a part of the video just for a good time and a good close-up. It was a lot of work, curating the whole thing with the guys, but ultimately so worth it because the visual came out exactly as I wanted it to and it’s just a testament to like-minded individuals coming together to create art that we believe in.

In your new EP, what are some of the underlying themes fans can expect?

I wrote a lot about unrequited love, a topic I’ve always been shy about because I’ve been through so much rejection in the romance department and I’ve felt so insecure sharing that truth, but I’m at a point in my life where I’d like to be honest about that without shame and find some sense of healing. I also speak a lot about mental health – depression is something I’ve suffered from for years and it’s bred some unhealthy habits that I speak about quite explicitly in the music. Most importantly, there’s a lot of carefree energy within these songs, a lot of grit that I developed from live performances and have been so excited to put into studio recordings.

Are you planning on releasing an album soon?

Yes! I knew before we went into the studio that my second album would be a part of the ‘ode to growth’ series but I wanted to split it into two parts to allow for more personal and musical growth. I had more time to write, and create more music that fits this story, and part one is an introduction to the stories I feel should be out in the world right now. I’m constantly writing and recording new demos and I don’t want to set my heart on any specific tracks just yet because the fun right now is in creating, and I’m enjoying every moment of that.

What can we expect from Moonga K. in the future?

So much music. I’ll be releasing as much music as I can from here on, and just keep that momentum going. I’ve also got a few video treatments for songs off part one that I’m desperately waiting to create with my videography team once we’re out of purgatory. We’re pushing limits, testing toxic masculinity, and being ourselves in the most fun way possible. I’m excited to share this phase in my life with open hearts and open ears.