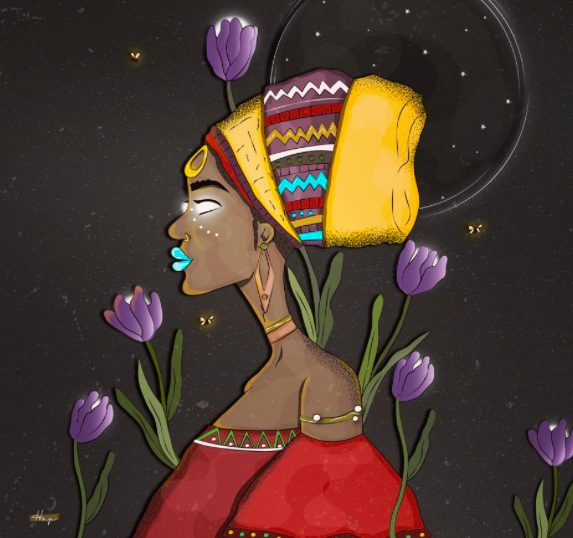 “Illustration gives me a platform to be free and express emotions I never show to anyone else,” says illustrator, Happiness ‘Hap’ Masiya. We chat to her about her artistry, inspiration, influence, and the meanings behind some of her favourite creations.

Based in Johannesburg, 23-year-old Masiye brings her vivid imagination and thoughts to life using character illustration; a medium she discovered and soon fell in love with after exploring with a range of mediums and styles.

“As an Illustrator, I think it is important to understand what sort of medium one is comfortable with. Whether it’s flat, 3D, rigid, or abstract. Then when you work with the chosen medium, you grow and people will see your work for what it is. I stuck to illustrating characters that I could
only imagine, environments that I would like for them to exist, I created another world for myself; a world that makes me feel safe to express all sorts of emotions,” she adds.

While she draws inspiration from a range of avenues, she is particularly inspired by African aesthetics – such as primitivism movement or the use of masks, and African culture. This aesthetic is presented in a modern and surreal way through the use of carefully chosen colours, patterns and African masks.

Eager to know more about her work, we asked Masiye to share five of her favourite creations and the inspiration behind each piece:

“This artwork was designed to be used when I make an announcement or a share of a new illustration or any news that have to do with my work.”

“Her favourite flowers are tulips and that’s what she wants for her birthday -to celebrate her birth, however, she’s always misunderstood, misguided and apparently demands a lot. Most women go through that. That’s why I named her Promise. A Women’s Day post.”

“My grandma used to leave for fishing every day of the week so we could get fed. She always left with a note that informed her what time the sunsets. She would always come back with the same smelly basket of fish and the note in her hand so she never forgets it for the next day. I used an African mask as her face because her identity doesn’t matter. It could be anyone’s
gogo.”