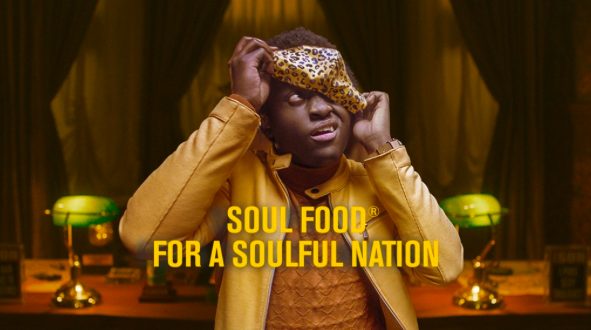 Posted at 20:09h in 10and5, Advertising by Thabang Buthelezi
0 Likes

As the largest showcase of South African creativity, our goal is to keep you updated on what’s happening in SA advertising as well as the creative industry at large. Unfortunately, due to the global pandemic which has affected millions of lives across the globe. The world came to a standstill and for some time, we all panicked. We stopped creating content and were essentially forced to reimagine the world as we know it.
With the easing of lockdown regulations in the country, we have started seeing more creatives and brands create content as well as reinvent themselves.

A piece of content that successfully depicts life in South Africa during lockdown is Chicken Licken’s new TVC. The fast-food chain partnered with comedian Tyson Ngubeni to pay tribute to the nation’s ‘soul’.
“It takes a #SoulfulNation to make it through these tough times. That’s why for our new ad, we are honouring the ordinary people who have kept us entertained and our spirits up during lockdown,” the brand shared on Twitter. The ad looks at some of the hilarious moments that have kept us going during this challenging time. From when the president was struggling to put his face mask on, to when a woman was caught inside her boyfriend’s car boot.

Clover decided to change the colour of its bottles from white to blue. I went to get a few essential items at the grocery store a while back and noticed that the new bottles are now blue, but to be honest, I didn’t mind. A week or two after that, I was greeted by a blue man when I opened my Twitter TL.

This blue man was explaining why Clover bottles were now blue, embarrassed on behalf of everyone that was involved in the making of this advert, I start reading the comments under the post.
“Hahaha, Well done to Clover now everybody knows the bottle is blue. Yeah, except I hate it now and I am buying other milk brands,” Karl Laureau tweeted.

“If I ever have imposter syndrome feelings again, I’m going to think of the entire team that made this, the agency that was paid for it and whomever at Clover it was that approved and signed off on this,” Bhavna Maharaj tweeted.
The comments under the post are sure more entertaining that the ad itself.

The Loeries are around the corner. After announcing that they are moving the award ceremony from Durban ICC to Constitution Hill, Braamfontein, many of us were looking forward to the new experience as well as possibly having the after party at Royale. But due to COVID-19, the awards will be streamed. The AGM and board selection is taking place on Monday, 20th. More info to follow.

The Pendoring Awards have released key dates for the 2020 year, and another blistering campaign to drive home the need for and celebration of indigenous languages in advertising. They hoping to see a growth in branded content entries from film, print communication, publication design as well as book cover designs for books published in indigenous languages. With various surveys revealing that reading has soared during the COVID-19 related lockdown, this year presents a fresh opportunity to shine a spotlight on outstanding book cover designs. Find more info here

Justice Mukheli x The One Club for Creativity

Johannesburg born creative, photographer and film-maker, Justice Mukheli has been selected to judge the Global Guns 18 Competition. The One Club for Creativity is a portfolio based award competition that identifies and highlights young creatives from around the world. Mukheli will be joining 78 other top creatives – from 32 countries on the judging panel.

The series is titled, which is named after a Klo Way after a South African colloquial term. The series features an alter ego ‘uTony’ who assumes various representations absent of any obvious narrative.

ABinBev Creative Director Nhlanhla Ngcobo, also known as Bra Sol dropped his much anticipated single #FUSEGani. Bra Sol works in advertising and dabbles in music. He is part of a collective called BIG FKN GUN. Listen to the single here.

The teenage social entrepreneur and co-founder of Blackboard Africa, Amonge Sinxoto, continues to be recognised globally as an influential thought leader.

The BBC World Service asked ‘thinkers’ from across the globe to imagine the most inspirational and meaningful changes that might result from the coronavirus crisis under the ‘Rethink’ title for their Rethink podcast. Amonge is featured alongside The Pope, The Dalai Lama, Caleb Femi, Lady Hale, Kwame Anthony Appiah, Andy Murray, and the South Korean foreign minister, Kang Kyung-wha.

Mathobela, who also happens to be a DJ, decided to sell his shares at Zkhiphani after successfully building the platform for over a period of ten years as he saw that there are more opportunities in developing niche content hubs, naturally as a house DJ himself, he decided to commence by introducing the first video house magazine.