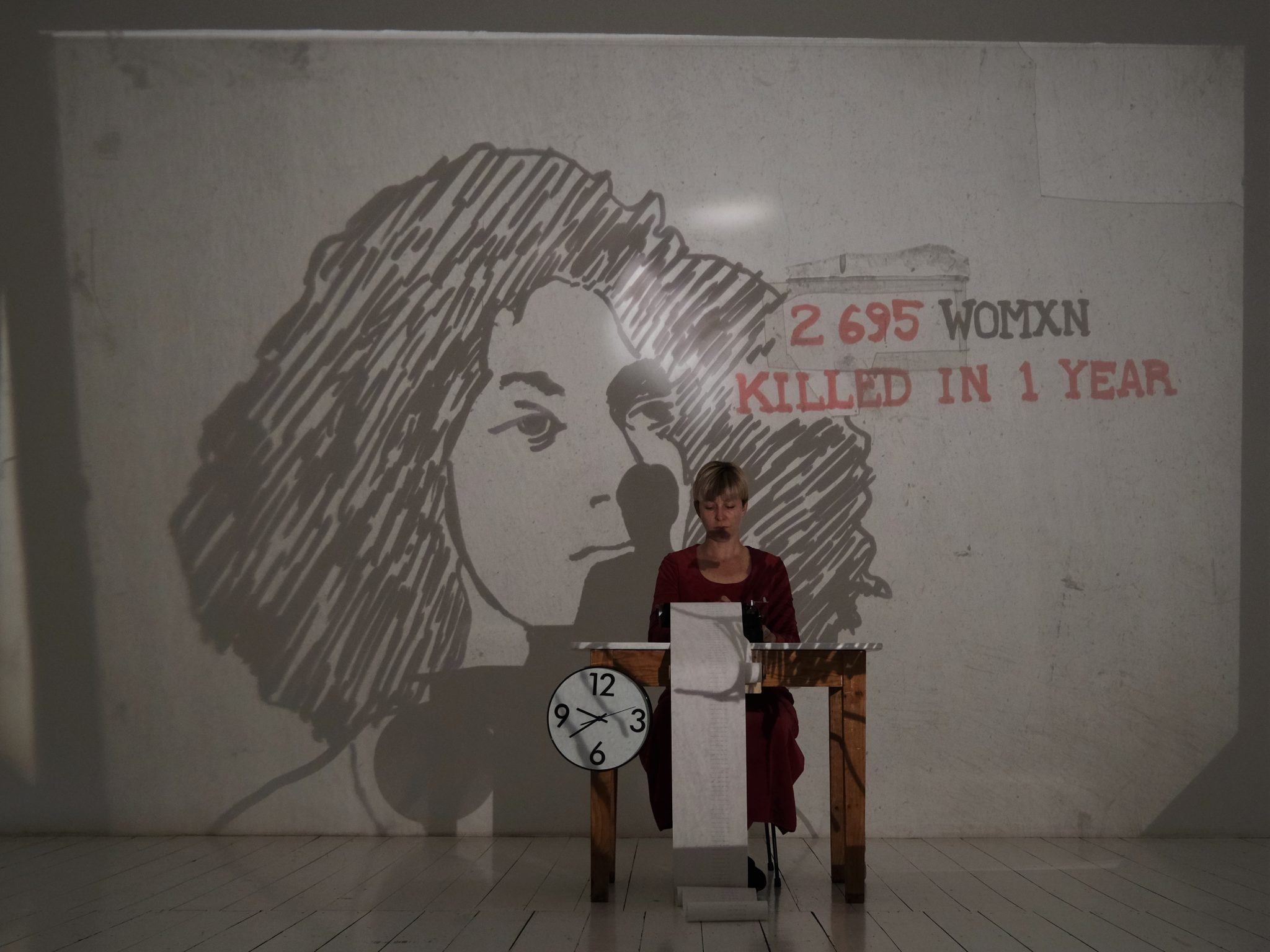 10 Aug In Conversation: Carin Bester on ‘She had a name’ Durational Performance & Activism Through Art

Performance artist Carin Bester kicked off this Women’s Month with a powerful virtual performance, titled She had a name – in effort to continue fighting against gender-based violence and acknowledge the many womxn who have fallen victim.

In the previous statistical year, records show that 2 695 womxn were killed in South Africa. This appalling number lead to Bester questioning how long it will take to acknowledge each of these womxn as a person and not just a number.

The durational performance, which is supported by the Department of Sports, Arts and Culture, was streamed live on Facebook as part of the ‘Exploring Video Art’ project. Bester tells us more about the performance and chats to us about activism as well as advocating for women’s rights through art.

You took the effort to acknowledge the many womxn who have lost their lives in the country with your powerful performance titled ‘She had a name.’ Briefly tell us about this performance piece.

She had a name is a durational performance art piece which was also filmed to create a Video Art Piece. This is part of an experimental project called “Exploring Video Art,” in which I explore the cross over between live performance (with the limitations of lockdown) and video art. She had a name stems from an idea which I have had for a very long time and want to continue working on within certain forms for a long time to come: the idea to create a visual representation of the number we see when crime statistics are released. Also, this piece specifically was a way in which to acknowledge these womxn as people. We do not have their names, but each victim had a name therefor the title She had a name.

While gender-based violence is a longstanding issue we have been faced with as a country, we particularly saw an increase in cases during the lockdown period. Did this increase in numbers prompt you to conceptualise the idea?

Originally this first piece for “Exploring Video Art” would not have been about femicide, but when we had that horrible first few weeks of femicide after the lifting of lockdown level 5, I realised I need to focus on Femicide for this first piece; especially after the president’s speech in which he named a few women and children and everyone was so moved by this, but my feelings were not the same because naming a handful of names when thousands of womxn die each year is not enough.

In addition to acknowledging the high rate of femicide in the country and remembering the womxn whose lives have been lost over the years, what message did you intend to communicate to the viewers?

I do my work to create awareness in a way that is different from newspapers, long written documents, or speeches. I try to create strong images that will catch the attention of even those who usually turn away from the bad and the ugly. I want people to stop and think, I want people to be upset enough to ask themselves the question: “What can I do to help the fight against GBV?”

As many may know, you are not only a performance artist and an actress but an activist too, and use your platform to advocate and raise awareness for womxn’s rights. Can you please share with us the importance of activism through art and the power it holds in shaping and transforming the views and actions of society, as well as bringing a range of issues to the forefront?

We each have a way in which we can contribute to fighting against the injustice and mine is through my art. Being an activist developed through my art. For me activism through art has always been immensely powerful because it stimulates the senses, visually we see something, we hear a song or a poem and it triggers us and because of that, we remember it. I feel that it is this trigger, this feeling that is created within people through the medium of art that awakens a lot of people to certain issues – which is why it is so important to use art. If we think of advertising; strong images, music and clever words are used to catch the attention of potential customers, activism in art works in the same way.

Does most of your work respond to gender-based violence and femicide?

Mostly yes. I do, however, focus on other issues womxn and children face. One of which is body confidence; it angers me that there is still this unjustifiable expectation of what we should look like, of what female beauty is. The habit of changing what we look like naturally, not because we just feel like something different, but because from a young age, media
creates that box within which beauty belongs.

It is amazing what has been done to challenge the notion of prescribed beauty and how many brands have endorsed natural beauty. Still, you walk into a store and the mannequins often look like they seriously need a sandwich and the fuller figure is pushed into a corner that is part of the range for the “bigger” person. Or the number of products created to remove stretch marks and cellulite, both something that naturally occurs in everyone, but someone somewhere decided it’s not beautiful and so a multi-billion (every currency) industry developed and woman hide themselves in summer instead of enjoying the beauty of nature. This is just one of so many issues, but as you can see, once I get into a subject it can go on for a while so I won’t get into all of it right now.

Can you share with us the importance of highlighting womxn struggles and celebrating them through different shapes and forms – particularly during the month of August?

Womxn are the mothers of our nation, of all nations, and for many years, because of patriarchy, womxn have been oppressed and even though some people might think we have equal rights, that is not the reality in practice.

As womxn, we don’t feel like celebrating womxn’s month in particular, especially not when you start getting all these non-essential items advertised with pink roses and ribbons. But we can and must celebrate womxn for being resilient, for fighting this fight nonstop.

Highlighting the struggles of womxn is important so people are aware of the injustice still happening in all sectors of life. If people are unaware of a problem, they can not work towards changing it! It is extremely important to show the youth – both girls and boys, that womxn are powerful and this does not mean men are less powerful. We need to promote equal rights.

Watch the performance piece here and catch Bester this Friday – 14 August at 14:00, on our Activism and Social Change in the Creative Industry webinar where she will delve deeper into her creative practice and her role as an art activist.

activism, Carin Bester, She had a name