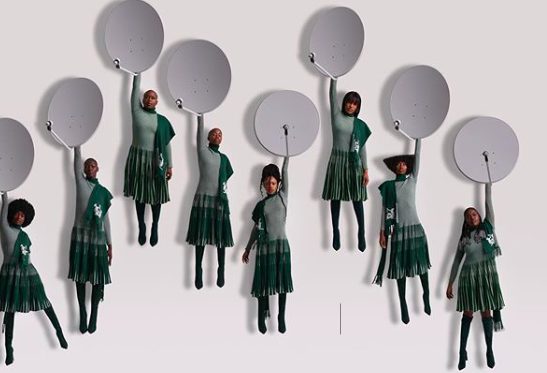 This week, fashion lovers in the country were treated to new and refreshing collections from some of SA’s top designers. LVMH Prize 2019 winner and SA designer, Thebe Magugu released his 2020 campaign for the AW20’s “ANTHRO 1” collection, LVHM Prize 2020 winner Sindiso Khumalo also released a teaser image of her SS21 collection which is set to drop later this year. Read more fashion news below:

LVMH Prize 2020 winner and designer Sindiso Khumalo shared that her SS21 collection is a healer. After experiencing loss as a collective, due to COVID she needed to take a step back and give herself time to grieve.” Its been such an emotional collection, so much loss happening all around and for many of us very close to us. I’ve had to really take a step back and allow myself the time to grieve, for my friends and family who have lost parents, aunts, and siblings. This is why creativity matters because it’s a healer. This collection was my healer, ” she writes.

“This season, we wanted to challenge the narrative of a women’s place in society especially in African cultures. We dove into the world of cultural influenced women living in a modern space, a woman who encompasses domestic features and in spite of our nation’s deep-rooted patriarchal notions can still hold primary positions in business, politics, and society.”

Known for his distinctive street style, SA based designer Wanda Lephoto launched a unisex knitwear offering. Details of the full collection as well as the launch of their website and online-store will be announced soon.

Magugu‘s AW20’s “ANTHRO 1” collection, explores objects associated with his early childhood. The artist took to IG to explain the creative process and thinking behind his latest offering.

“From the wheels of a toy bike that will eventually ‘scrape’ instead of ‘turn’ (from excessive use), to the satellite dishes which were the source of so many of our various awakenings, I hope you can look at these images and see parts of your past, and a vision for your future,” he says.

Created with the aim of “dressing people, not bodies”, Desigual is famous for the individuality and unique character of its creations, which aim to bring authenticity to those who want to be 100% themselves and express their most creative side. The collections are made up of colourful and unapologetic garments that exude non-conformism, rebelliousness, and optimism.

Desigual’s first store in South Africa covers an area of 180 m2 and carries collections from the Woman, Accessories, and Shoe categories. As has been the norm since the launch of the new brand image in 2019, Desigual is using this store to showcase its new corporate identity and shopping experience. The brand has opted for a franchise format and will be entering the South African market through local partner Marian Gaylard, a strategy that has proven successful in other regions, such as Latin America, and which the brand will now be following in Africa.

Follow us on IG for daily updates on SA creativity.