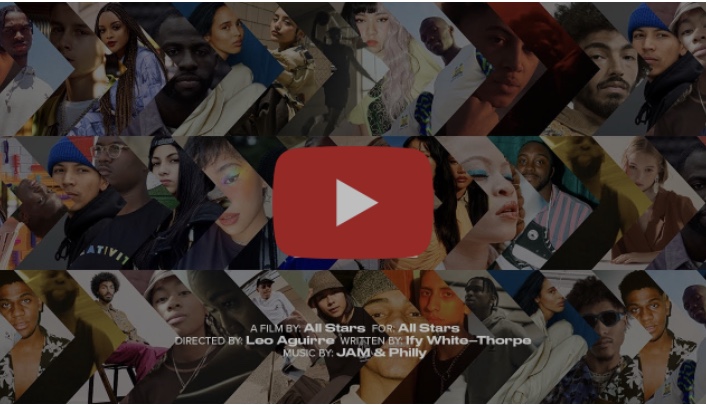 Throughout time, Converse’s iconic “All Star” sneakers have adopted as a means for expression around the world and across cultures; the canvas sneakers have been worn in moments of both rebellion and progress, change, and creativity. Today, Converse announces a new community approach aiming to break down barriers to create progress for a new generation of cultural game-changers by expanding the Converse All Stars program.

For over two years, Converse has been steadily growing, engaging and building with a grassroots global community of more than 3,000 individuals from more than 27 cities, spanning LA to Lima, the Converse All Stars. These emerging leaders champion change in sport and culture. Connection with Converse aims to hone their creative talents and amplify their voices — supported by opportunities to co-create creative work and shape the future of Converse on its social and digital platforms.

This fall, for the first time, Converse is opening this community to the public, inviting up to 250 creative individuals to join Converse All Stars through November 2020. New members will have the opportunity to engage with the All Star Series, an ongoing experience of one-of-a-kind workshops, conversations and performances facilitated by Converse’s extended creative family. Past All Star Series sessions have included the likes of Tobe Nwigwe, Jefferson Hack, Virgil Abloh and Samuel Ross.

Converse’s commitment to the community is punctuated with a $1Million accelerator program dubbed Converse All Star Captains, which aims to fast-track the progress of a dozen individual All Stars who strive to define a new possible through creative action in sustainability, inclusivity and diversity, and youth development — areas where progress is critically needed today.

Converse All Star Captains was conceptualised for and by the Converse All Stars community over the course of nine months, with a core group of thirteen individuals from nine countries steering its final format. The committee includes Harvard College Student Body President and Vice President, James Mathew and Ifeoma “Ify” White-Thorpe, who unexpectedly went viral in November 2019 for their groundbreaking and inclusive undergraduate council campaign.

In October 2020, All Stars will have the opportunity to submit individual proposals to Converse on ideas they believe will change the game. Beginning in 2021, the first annual class of Captains – which will include Mathew and White-Thorpe – will each receive a year’s worth of funding to help bring their ideas to fruition along with mentorship opportunities from Converse. This Captain’s class will also be directly and actively involved in providing feedback for and insights into Converse brand work, selecting future All Stars and influencing experiences and programming for the community. Converse will share the collective progress made throughout the journey.

Check out the behind-the-scenes on the making of the film here.

All Stars, Converse, Converse All Star