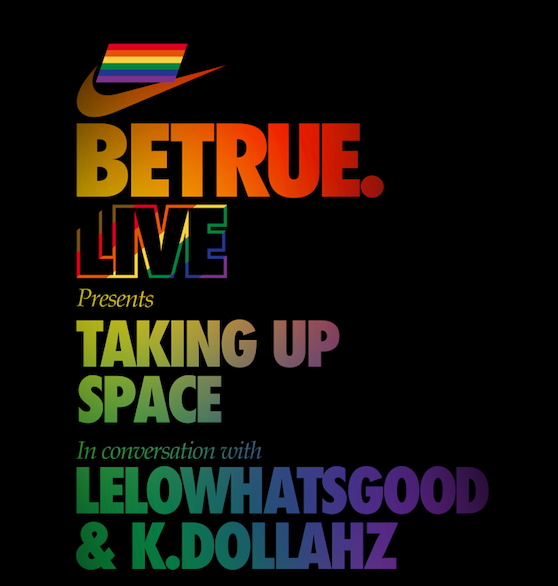 Nike has a history of taking a stand on social issues through their advertising and have been successful in doing so over the years. Their campaigns have made social statements throughout history and the BeTrue campaign is no exception.

Aimed at addressing issues within the LGBTQIA+ community, the South African leg of the campaign kicked off this September with 10and5 LGBTQIA+ editor LeloWhatsGood and artist and DJ, Kalo engaging in a discussion about the journey of SA’s queer community as well as how it’s like navigating the entertainment industry as a queer individual.

Lelo joined the Nike brand as an influencer a while back and has used his voice, as well as the platform to provide a safe space for the queer community and serve as a facilitator for queer excellence.

He continues to educate and honour queer people around the country through VogueNights – which makes perfect sense why he was asked to host the first of many Nike BeTrue IG Live conversations set to take place throughout 2020.

Kalo was carefully selected to be a part of the Nike BeTrue campaign to share his creative journey. The Johannesburg native DJ, who is commonly known under his byname ‘K-dollahz’ has been open about his transition and has used his voice and platform to educate and empower people who are looking to embark on a similar route – he hasn’t kept his journey a secret. It’s crucial for the community to have people who are transparent.

The beginning of the IG Live chat saw the creatives reminisce about the first time they met in Kitcheners – a bar in Braamfontein, Johannesburg after Lelo wrote a piece for NewYorkTimes which featured K-dollahz. The two got on like a house on fire and have been friends since.

Both Lelo and K-dollahz journey’s have run parallel to one another. Although Lelo was convinced by industry friends to pursue a career in music, K-dollahz, on the other hand, had always been interested in music and didn’t wait for anyone to let him in the industry, instead, he made it his mission to penetrate and dominate the space.

“I was interested in music, I was always going to shows, watching deejays, participating in the scene, and always around queer musicians as well. I am just a naturally confident person, I didn’t wait to ask ‘can you let me in?” He says.

Evidently, K-dollahz has always been a mover and shaker. However, he didn’t have anyone to look up to at a time, there were not many trans people around him. This led to a conversation about representation – how and when they both first felt represented as queer people.

K-dollahz jogs his memory to his first year in university – when he first discovered a music group named ‘The Internet’. “Their sound spoke to me at the time. It was just beautiful to see great music, great visuals, super well-received music that wasn’t getting criticised for being queer and for being natural. That was a catalyst for me to be like, wow, people like me can exist in this industry without having to compromise who we are and having to explain our identity,” he says.

He didn’t have to explain his identity and felt seen.

He reckons that queer aesthetic is a ‘wave’, you see it in fashion, however, he finds it problematic that cis men have appropriated their ‘culture’ even though they continue to be gatekeepers in the music industry.

He talks about the fact that he was beaten up in club bathrooms for being trans and finds it necessary that queer people create safe spaces, hence the theme of the talk.