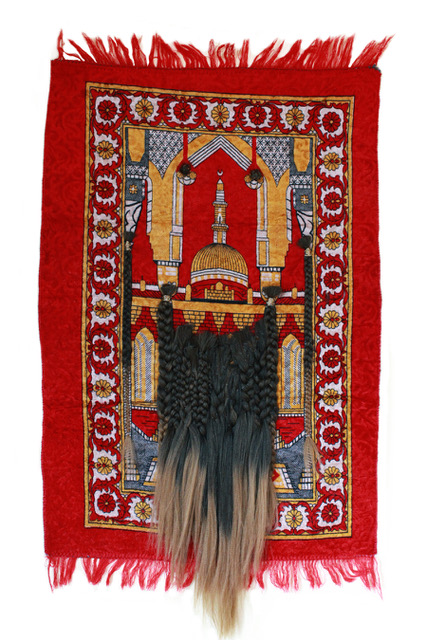 “I feel a sense of belonging when I think of District Six. As I identify as Cape Malay, I feel connected to the area and therefore the art museum as my ancestors were inhabitants of this area and were tragically removed not too long ago. I wish to do every bit that I can to uplift and support my community and I feel that the donation of artwork is me giving back and thanking my ancestors for all they had done for me to be the successful South African muslim female coloured artist,” says Cape Town-based fine artist Laylaa Jacobs, who is part of the many artists and organisations who have joined forces to save the historic District Six Museum.

For the Save the Six Auction, which will be held on 10and5’s platform, Jacobs has chosen to donate “Fulla”, an installation made up of six prayer mats embellished with body adornments, which represents the artist’s faith, identity and sense of belonging – a theme that she feels relates closely to the topic of Save the Six.

Fulla, a dark-eyed, Barbie-like fashion doll created almost 14 years ago by a UAE manufacturer, has amassed a huge following across Arab countries. She wears a hijab and comes with her own tiny prayer rug, in pink felt. Throughout her years as a creator, Jacobs has drawn inspiration from this cultural icon.

“My entire artistic style originated from my memory as a child the moment I was given a Barbie doll. My doll obsession started with Barbie and then slowly evolved to My scene, Bratz and then Fulla,” Laylaa shares.

“At the age of 10, I received my first Fulla doll from Mekkah, yet I still neglected to find the attraction towards the doll and continued playing with my original Barbie’s. As I got older I started to realise that behind Fulla’s robe and hijab was Barbie and that they were the same doll. Now, 16 years later I find myself creating my own doll combining both Fulla and Barbie,” she adds.

Jacobs’ installation is a statement of ethnic and cultural assimilation, a personal narrative touching on topics of faith, identity and belonging as a Muslim woman within Western cultures.

Her identity as a Muslim woman is represented by the prayer mat, while the layers of nail polish, bedazzles and hair extensions represent her Western desires, as well as her inner chaos with her identity as both Barbie and Fulla.

The application of body adornments represent the West imposing on her through media, however, she is also represented as the one imposing on her own religion and challenging the idea of what a modest Muslim woman should be and how they should appear.

Through her work, she shows her aspirations to merge Fulla and Barbie as one identity, and highlights that this desire to do so does not fade away, but rather revolves. “As much as I attempt to combine these two identities, I will always be observed as Fulla. Fulla is about my inner chaos as a Muslim woman facing challenges most people take for granted. Muslim school encouraged me to be modest in behaviour as well as my dress code but when I returned home I’d play with my Barbie. I am torn between what I should be and what I want to be,” she explains.

By focusing on themes of identity, faith and belonging, she intends to educate viewers of her artwork to take cognisance of the boundaries society places and the stereotypes centred around women like herself.

“In the Western world, there is a pressure on women like me to feel as though we have to be categorised and boxed in. I embody faith, identity, belonging and western desires. I know that I may be one person, one artist but I and my artwork represent something way bigger, we represent an entire community of like-minded women,” she concludes.

Stay tuned to our Instagram page to bid Jacobs’ pieces and many more. Check out the post below for the full preview: