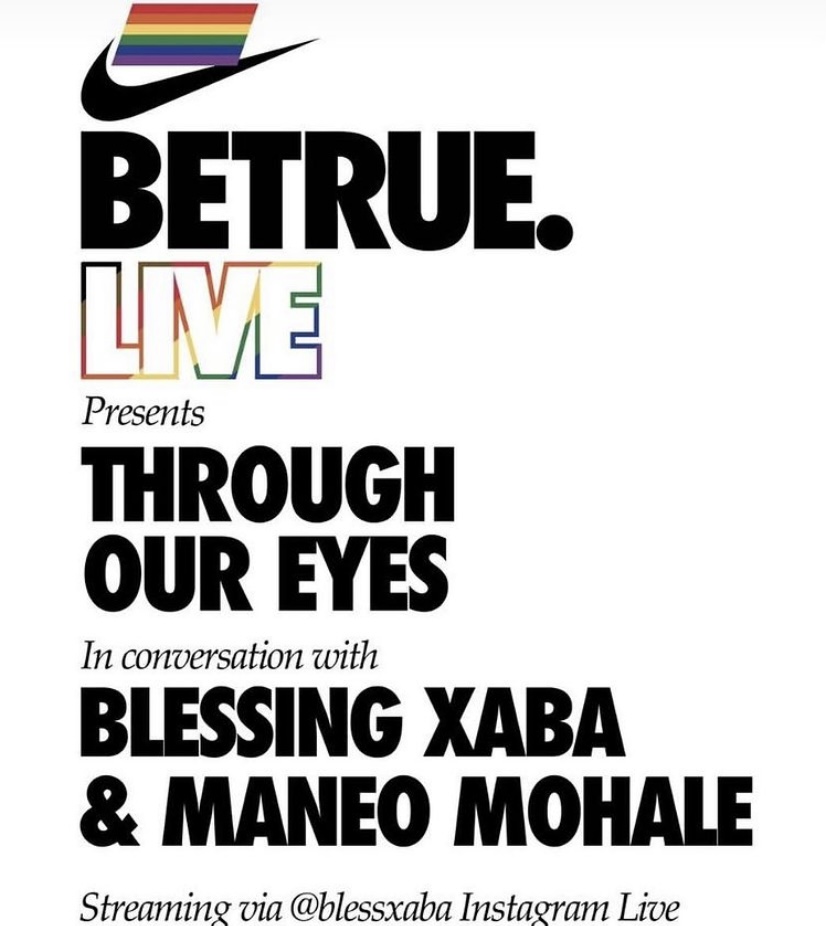 01 Dec Nike Presents ‘Through Our Eyes’: In Conversation With Maneo Mohale & Blessing Xaba On The Intersection Between Highlighting Queer Stories & Representation

For the second talk of Nike’s BeTrue conversation series, the world-renowned brand brought together performer Blessing Xaba and author, Maneo Mohale to engage in a conversation centred around storytelling and the intersection between highlighting LGBTQIA+ stories and representation.

Blessing Xaba, known for their strong presence and activism within the LGBTQIA+ community, is a student, performer, and a storyteller who creates work that dives deep into complex, yet meaningful matters.

Much like Xaba, Mohale is a lover of storytelling, too, and uses their passion for words to steer important conversations. Their debut book, Everything Is A Deathly Flower, perfectly depicts their intentions to use words as a tool to highlight queer stories, experiences, emotions and much more.

As influential creatives who educate and honour the LGBTQIA+ community through various forms of storytelling, it is no surprise that the pair was chosen to unpack on the aforementioned topic.

As the conversation between the two started, a lively, vibrant energy that could be felt through the screen filled the ‘room’. Xaba and Mohale went on to wish one another a belated Pride and reminisced on how they both celebrated the day under COVID-19 restrictions.

They soon went on to share their journey as not only storytellers but as queer individuals in a society where they are under-represented.

“Does it sometimes feel like twice the calling to be a storyteller and to be queer?” Xaba asked openly.

“I love that you call it a ‘calling’, I love that!” Mohale expressed.

“Yes, storytelling was/is a calling that I’m still responding to – always in a relationship with it, and queerness was definitely [a calling], one-hundred percent!” they added.

Mohale quickly went on to question Xaba about which, between the two, appeared first in their life. The question was warmly met by Xaba’s short, reminiscent story, where they go back in time to their younger years as a kid.

“I think for me, the one thing that came first, that opened everything, was the storytelling space. Growing up in storytelling spaces, you start to take on characters; there are elements like dressing up, elements like role play – because obviously, you’re forced to portray different things and no one’s judging you per se. In that space, I was like ‘okay, I might wanna keep this wig for later, I might wanna wear this every day, and I might wanna identify as this on a more permanent basis,” they shared.

The conversation then saw the two chatting about distinct memories of the first time they came across a queer image outside of themselves, and feeling represented in wide, public spaces.

“Aus’ waka, Tshepiso (my sister, Tshepiso), would tape her favourite concerts on a VCR, and I’d come back from school and I’d just push it in,” Mohale said. “I remember seeing a Prince concert, and for me, I was like ‘wait, there are so many things happening with this person; they’re wearing a crop top, they are wearing their wife’s jeans, they’re wearing makeup, they’re beautiful […] and the heels! It was Prince – Prince did that for me,” Mohale continued as they remembered the first time they encountered a queer image.

Similar to Mohale’s experience, Xaba’s distinct memory was created by a public figure through mainstream media, too.

“There was a television show on SABC that Somizi was the presenter of. I think the show was called Connextion. He used to present the show in two segments and in the middle of the show, he’d come back in drag!

There was this presenter, who does half the show as a man and then does the second half as a woman, and it’s like… completely normal. I definitely remember that as being among the first recognizing of myself outside of my mean,” Xaba explained.

The rest of the conversation continued on a similar note, with the two creatives sharing stories about their journey, navigating the industry, and playing their part in powerfully representing the queer community as a whole, as well as pushing the progression of this representation.

NOTE: The original article had been misgendered and has now been corrected.