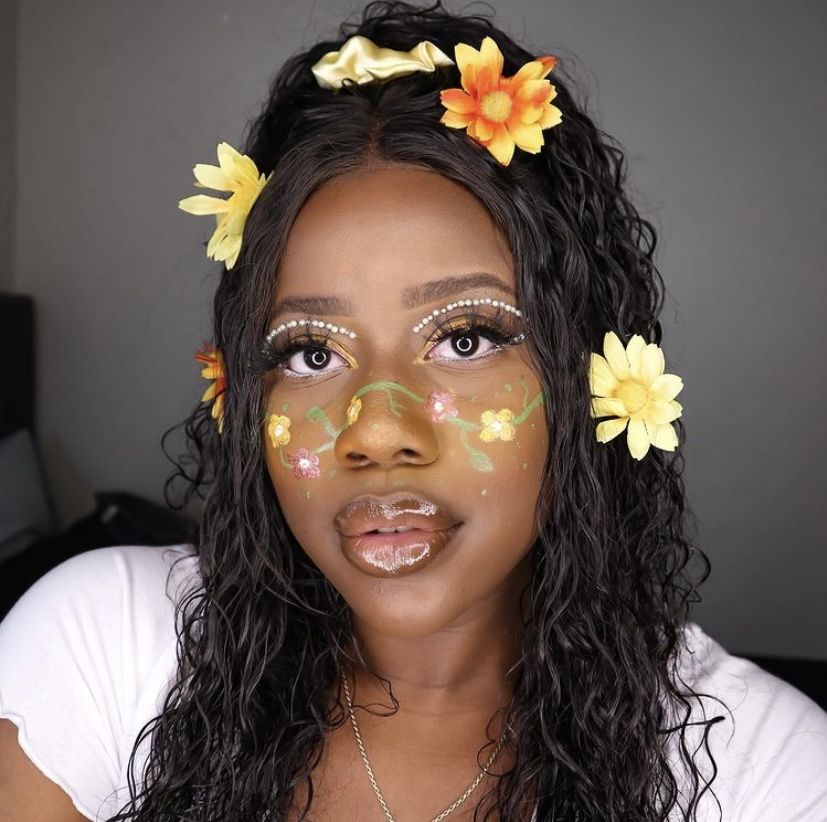 Cape Town-based makeup artist Foyin Ogunrombi, popularly known as Foyin Og, is back with round 5 of her #7days7faces makeup challenge and this time around, streaming platform Netflix has tagged along.

What started off as a social media challenge to stay productive and inspired during level 5 of South Africa’s national lockdown last year has led to wide recognition for the work of this talented artist, who has since collaborated with brands such as Essence Cosmetics, Haus Wine and now Netflix. Fellow makeup artists and enthusiasts have joined in too, sharing their own interpretations of the themes on social media. For this round of the #7days7faces challenge, Foyin created looks inspired by seven Netflix shows of various genres. We caught up with her to chat about the challenge, the partnership, her favourite look, and more.

You started #7days7faces last year during the hard lockdown and the trend quickly became famous across social media – with make-up lovers and enthusiasts jumping on to it. Can you briefly tell us what it’s about and how you came up with it?

#7days7faces is a makeup challenge all about exploring your creativity and pushing yourself to try something new. It’s a week-long challenge that consists of daily themes and makeup prompts that people get to interpret however they see fit – but it’s grown into a really positive makeup community where beginners and professionals alike get to stretch their makeup muscles. It started during the early days of hard lockdown (remember when we thought it would just be 21 days? Sigh!) as a way for me to create content and get inspiration during that challenging time. Inspired by Kay Yarms’ #21Beats4Kay, I created my challenge for people who wanted to be creative but couldn’t commit to three full weeks of makeup and needed help with inspiration and motivation along the way.

Almost a year later, the trend is still ongoing but this time around, it’s being sponsored by Netflix. How did this partnership come about?

The most amazing thing about this partnership is that they came to me! In round 4 of this challenge, I partnered with Essence Cosmetics and Haus Wine to create makeup looks that revolved around their brands, and I guess seeing the creativity that came from that, Netflix wanted to try an innovative way to promote their new Shondaland show, Bridgerton. Instead of a few social media posts merely speaking about the show, we decided to have a Netflix-inspired #7days7faces which allowed people to learn about the show but also explore everything else Netflix has to offer.

How has it been watching the challenge/trend grow from something you started while in lockdown to something that has received brand recognition?

It’s definitely been the most incredible and humbling experience ever! Seeing it grow like this was something I had hoped and dreamed of, but actually seeing that materialise and the opportunities it’s brought me has been mind-blowing. The fact that people keep wanting to do the challenge and keep requesting another round keeps me going.

The Netflix edition of #7Days7Faces saw you creating looks centred around seven shows/movies across various genres available on the streaming platform. Considering Netflix’s wide selection of series, movies, documentaries etc, how did you choose what to create looks on?

One thing that people may have guessed at but didn’t really know is that I tend to reverse-engineer the makeup prompts. So in this case, I was thinking about different makeup looks I wanted to try out and then I was finding genres and themes that revolved around them! Doing this can often have me playing it safe, but I’ve found that it also keeps me on my toes because the looks I thought I could achieve tend to be more difficult to execute in real life. But I definitely looked towards my favourite shows on the platform and tried to find genres that were different enough and had enough inspiration within them so that people could interpret them, however, they wanted and get creative with their looks.

Which look was your favourite?

My day 6 Celebrity Special look for sure. I loved my day 1 Period Piece look which was inspired by Bridgerton because it was the first time I did a full cos-play type look and it got recognition from Shondaland and the actress who portrayed Queen Charlotte, but I loved by day 6 look because blocking out my brows is a technique I’ve been trying to master for months and I finally got it right! The whole look turned out exactly like how I envisioned it.

You’ve officially reached the end of #7days7faces, how would you describe the overall process? Did this one, in particular, differ from the previous ones?

I always feel a sense of pride and relief when #7days7faces comes to an end. You know, a week isn’t that long but when you have to do intricate makeup looks, shoot photographs and edit videos while engaging on social media constantly every single day, it does get a little overwhelming and exhausting! I’m sure many other people would agree that just making it to day 7 fills you up with pride because you made it through and you’re proud of what you created. This round was also filled with a lot of anxiety because it was such a huge partnership at the very beginning of the year so I was afraid people wouldn’t participate but the feedback was absolutely
incredible, hence the relief! Like, we pulled it off! It happened!

The new year has just begun and we’re curious to know what more we can expect from you during the year.

You know, it’s funny because I have no idea. I just want to create more, build more and see how much further I can take #7Days7Faces and what I can do with the community it’s built. If you asked me this question at the beginning of last year, I would never have told you to expect that I’d create a viral makeup challenge during a pandemic, so I’ve tried not to plan too much and just be open to the opportunities that arise in the coming year.