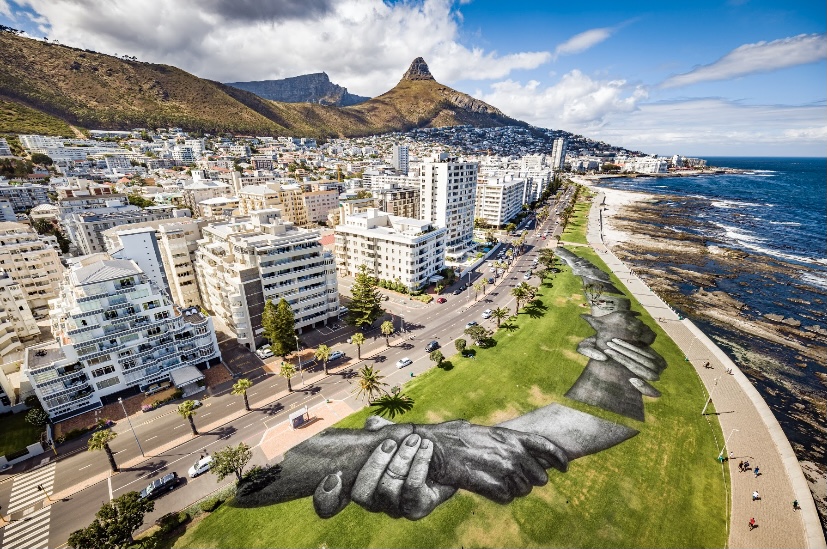 One of Africa’s largest and most anticipated art festivals, the International Public Art Festival (IPAF), presents Beyond Walls – a sprawling, large-scale artwork by Saype. Representing unity, mutual aid and common effort beyond geographical constraints, Beyond Walls is conceptualised as “the longest human chain in the world”. Seen from above the intertwining hands appear across multiple countries, with the ninth stage recently completed in three Cape Town locations – Sea Point Promenade, Philippi Village and Langa – as a precursor to the IPAF. Previously, the hands were depicted in Paris, Andorre, Genève, Berlin, Ouagadougou, Yamoussoukro, Turin and Istanbul.

As South Africa’s “Mother City”, Cape Town represents an essential step of the project due to its history marked by Apartheid. Beyond Walls symbolises the breaking down of political and social barriers among communities with the hope to further encourage positive dialogue. The project was carried out in collaboration with the Embassy of Switzerland in South Africa, the City of Cape Town, the IPAF and Baz-Art.

The artist Guillaume Legros, alias Saype (a contraction of Say Peace) is a Swiss-based artist who creates larger-than-life frescos on the grass and on the ground. He is renowned as the pioneer of an artistic movement linking street art and land art. Saype’s approach and innovative technique earned him global recognition as his poetic and ephemeral works travel around the world to impact minds and spark conscious dialogue. He is also committed to eco-friendly methods in his art, “One of my aims is to not only shed light on issues of social transformation but to promote eco-friendly and sustainable methods of creating art through respecting nature.” He was named one of Forbes’s thirty most influential people under thirty in the field of art and culture in 2019.

Given the history of South Africa and its people, the message of this project is an essential one in encouraging unity and understanding. Baz-Art co-founder Alexandre Tilmans says, “Cape Town is an ideal flagship destination for this project. As a city that prioritises openness, peace and mutual respect, we need to keep having courageous conversations, especially in this harsh climate created by the pandemic. Artworks like this spark important dialogues and messages of hope for all citizens.” The Embassy of Switzerland in South Africa is proud to support Beyond Walls in Cape Town. “In these challenging times with the pandemic, we believe that art plays an essential role in expressing hope, in uniting countries and people, and in advancing human dignity,” says Nicolas Brühl, Ambassador of Switzerland in South Africa.

The monumental fresco series is one of many memorable installations that the IPAF will offer this year. Attracting top talent from around the world, the platform supports creatives using their talents to bring communities together. The IPAF will run from 10-14 February 2021. Visit ipafest.co.za for more info.