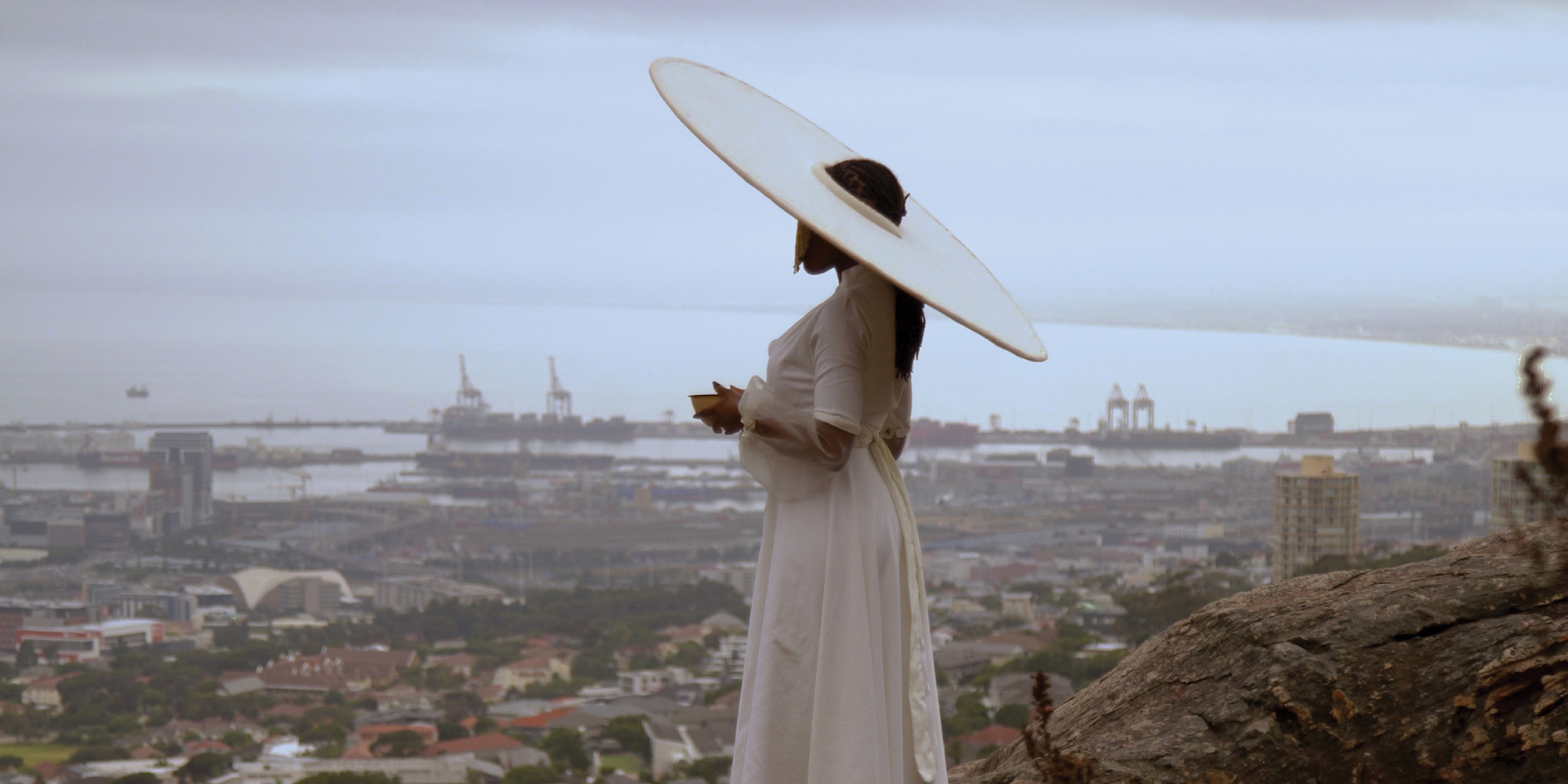 ISIMO is a short film by Sethembile Msezane, an interdisciplinary artist and Mellon Residency Fellow at the Gallery of the University of Stellenbosch (GUS). The film takes place against the backdrop of Hoerikwaggo, commonly known as Table Mountain in Cape Town, South Africa. In it, we see an ancestral matriarchal figure feeling and holding the pain of the living in her womb. She diagnoses the world as we know it as being ill, disconnected from nature and in need of healing.

Msezane’s work acknowledges that the world struggled with physical, mental and spiritual wellness well before the current pandemic. It also recognises the adverse effects of colonialism that continue to haunt society today. Though the education system has been threatened by Covid-19 with interrupted primary and high schooling, the younger generation is watching how we navigate this challenge, and what we teach them during this time is key in creating a better future.

With a curriculum of ancient indigenous knowledge informed the late prophet, sangoma and author Vusamazulu Credo Mutwa, the ancestral matriarch in Msezane’s film reminds us that even in adversity we need to continue to live. She suggests that the remedy is to filter through the noise and continue to exist in that which is fulfilling. While the film is available to view in its entirety on the GUS website from 4 to 13 February 2021, we spoke with Msezane on the themes this work explores.

How did the concept of the film come about? Why was this specific title chosen and what does it translate to?

The title depicts the times we live in. “Isimo” means the state of something – it could be the state of affairs, of the nation, the economy and so forth. It is the situation or circumstance we find ourselves in. My work has been quite immersed in the visibility and presence of black women in history and mythology that was and continues to be omitted in the making of nations. There was another part of my practice that has been subtle that I am bringing to the fore in this film. I am interested in the concept of just bein. There is an exhaustion of having to assert, reimagine, reintroduce and reclaim one’s identity, especially in a pandemic. I am interested in how black people can just be without having to fight to exist. Unfortunately, it seems that both standing up for our rights and being needs to occur concurrently. I have been drawn to what happens to the person who has had to fight to exist all day. How do they remember to live? Who tends to the soft parts of them? What are they teaching the young through their actions? Are they still able to acknowledge their spirit, to have conversations with God, or hear their ancestors’ guidance?

I suppose the awareness of our consciousness is something that I believe we need to handle to with care. On the daily, our spirits, minds and bodies are polluted by the realities of life with such systemic ills. Sometimes we feel powerless to do anything to change any of this because they are big problems. But in isiZulu, we say “ungaphela” – be careful not to erode yourself even in such circumstances. What I’m communicating is that we shouldn’t ignore our problems, we can do our part to contribute to change but we also need to show ourselves the love, affection and peace of mind to be strong and brave enough to meet the adversities of the world. This is illustrated when the #blackoutuesday black squares appear and we hear various sound clips from the #sarsmovement, #blm and #saveourchildren. It’s also illustrated in the movement of the matriarchal figure who feels the pain of her people with the scene of her on the rocky ground that is shaped like a uterus. She circulates a full cycle as a baby would in her mother’s womb even with difficulties of life that may be felt and experienced.

Throughout the film, you used ancient indigenous knowledge informed by the late Vusamazulu Credo Mutwa. How did this influence the tone of the film?

Babu Credo’s teachings are overlayed in the different scenes as a reminder between the various activities that occur in the film. It becomes a metaphor for when we find ourselves busy that we still need to remember to be connected to ourselves and others. This is especially true when we find ourselves falling on hard times. The visuals and senses in the film highlight such notions through the textures, colours and sounds that are present and experienced in the rocks. It’s in the silence of moments while doing an activity and letting the sounds of water wash over us. It’s in the drawings of the children that could signal their future aspirations, likes or wants. It is the reminder that mothers create life and we need to connect and maintain that energy irrespective of gender.

The film addresses themes of physical, mental and spiritual wellness, as well as colonialism, society and education. Why are these themes necessary to acknowledge and address, and how do they all interlink in the film?

Wellness is the cure but the question is how does one achieve it? Personally, I’m constantly asking myself this question as I navigate life, and at times I don’t do as well as I would like. The acknowledgement and attempts to address the issues people face on the daily is a step towards wellness – this is the diagnosis. How then do we attempt to fix it, how do we attempt to live? The chapters in the film signal the transition from wound/illness towards wellness.  Educating ourselves on solutions that tend to the systemic issues is one thing, but we need to educate ourselves on how to remedy the parts of us that have been damaged by the effects of colonialism for instance. We need to tend to the parts that make us us… intimacy, love and joy. As individuals we need to find what that is for ourselves, it doesn’t have to be being out in nature. What water is for me could be reading for you. The physical activity involved in the drawing with charcoal and chalk required a full body connection with the ground. That too is a way of activating the mind and spirit. These are just some of the illustrations of wellness that are found in the film.

The film also touches on life pre-pandemic – why is this something important for you to address?

Covid-19 did not magically curse the world, The world has been ill long before the pandemic. What this time has done is not expose but amplify the issues. Sometimes we choose not to see because it is too ugly, too painful. This time has called for us to deal with the issues as raw as they are and also force ourselves to take care of ourselves and each other simultaneously. Before trials of vaccines, our most effective defense against the Coronavirus was our immune system. It may seem as though dealing with issues such as institutional racism with the #blackouttuesday movement globally, corrupt governance with #ENDSARS in Nigeria, alongside replacing our humanity through loving acts may help in boosting our immune system and more broadly reconnecting with all living beings.

ISIMO can be viewed on the GUS website until Saturday, 13 February 2021.