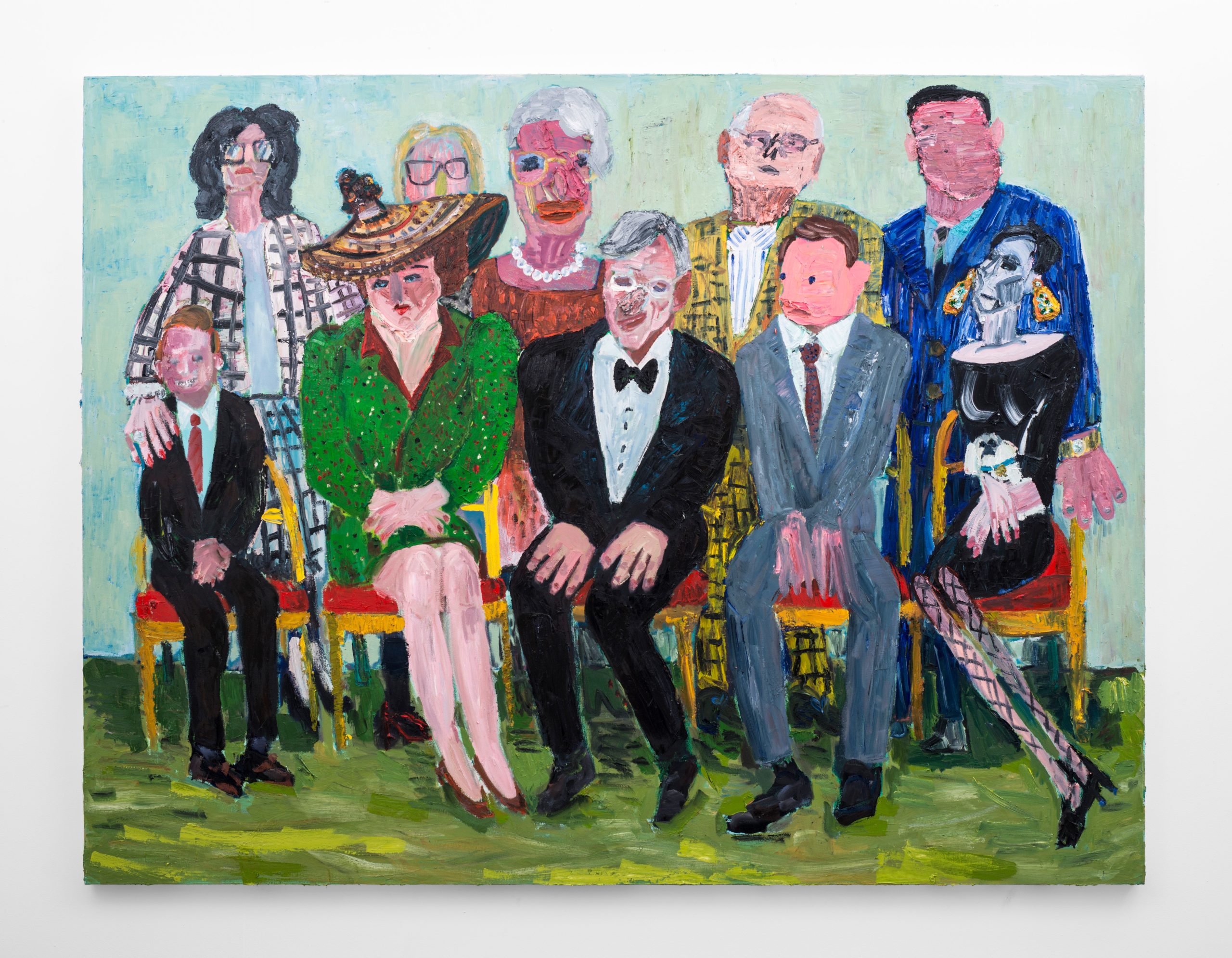 09 Feb ‘The Reunion’ by Georgina Gratrix opens at Norval Foundation

South African artist Georgina Gratrix is set to have her first solo exhibition at a museum, with The Reunion opening at Norval Foundation on Saturday, 13 February 2021 and showing until Monday, 31 May 2021. Guest curated by Dr. Liese van der Watt, The Reunion brings together 25 major artworks completed by Gratrix between 2011 and 2020.

Born in Mexico in 1982, Gratrix is known for paintings that feature expressive, impasto brushwork and humorous yet uncomfortable distortions of figures, objects and landscapes filtered through a colour saturated aesthetic. For over a decade she has investigated how the painted image can both seduce and challenge a viewer, while developing an immediately recognisable visual language that has a broad public appeal. Portraits of family and friends, as well as artworld insiders and popular culture icons, appear alongside oversized still life paintings of impossibly exuberant bouquets and, to a lesser extent, verdant landscapes recalling the province of KwaZulu-Natal, where the artist grew up.

Responding to loose themes within the artist’s practice, The Reunion is divided into three parts. The first section displays Gratrix’s portraits of social figures based on images pilfered from social media platforms, newspapers, popular television series, films and society magazines. Through the artist’s eyes these figures become almost archetypal and include paintings such as CEO (2014), a generic portrait of a white, male business leader, and The Appraisers (2018), a group portrait referring to the South African art industry.

The next section contrasts these archetypal figures with portraits of the artist’s family, friends and self-portraits conveying, through densely layered paint and unusual manipulations of the human body, something beyond the verisimilitude of the sitter. In The History of Dad (2011) Gratrix depicts a broad and ruddy stubble face with vaguely recognisable features, yet he is obscured by multiple eyes and surfaces. The bow in his hair — a recurring motif that Gratrix often uses in self-portraits — very literally imprints the artist into her father’s history and personifies the density of family relations. Also included is Nine Weeks (2020) — a series of watercolour self-portraits made by the artist, one each day, over the first 63 days of the government-mandated lock-down in South Africa due to the Covid-19 pandemic — in which the artist charts her changing mental states during this period of collective isolation.

The Reunion (2020), the group portrait which lends its title to the exhibition, is somewhere in-between, functioning as a bridge between these two sections. It brings together members of Gratrix’s British family, such as her aunt Mavis and her police sergeant grandfather Cecil Gratrix with various characters from British popular culture, including TV stars Father Dougal McGuire from Father Ted and Chief Inspector Tom Barnaby from Midsomer Murders. In its casual intermingling of family and popular personalities, this depiction of an imagined reunion simultaneously reflects a ‘portrait’ of the artist back at us, speaking of anglicised histories that are maintained through family ties.

The third and final section of the exhibition brings together a selection of Gratrix’s still life paintings. Imaginative and exotic, they are paintings of the heart, filled with flowers and birds, reminiscent of the tropical vegetation of Durban where the artist spent her childhood. Often massive in scale, as in All the Birthdays Bouquet (2016), which is 2.44 metres tall and 4 metres wide, Gratrix’s still lifes are iconoclastic in the sense that the genre is characterised by far more modest dimensions. These paintings oppose the intimacy and searching scrutiny that we find in her portraits, as they are clearly not ‘about’ anything in the narrative sense of the word, yet speak loudly about the artist’s commitment to the medium, her singular eye and the joy of painting that she gifts to her viewers.

As the exhibition’s guest curator, Van der Watt’s understanding of South African art history is complimented by an awareness of global developments in the discipline, making her ideally positioned to reflect critically on Gratrix’s practice. Van der Watt taught art history at the University of Cape Town before moving to London, UK in 2007. She has published widely on contemporary art from Africa in peer reviewed journals and books, visual art publications and online forums.

In light of the ongoing health crisis, an online public programme will accompany the exhibition over the course of its presentation with conversations and presentations taking place on digital platforms such as Instagram, YouTube and Zoom. Only 20 people will be allowed into Gallery 1 at a time, where The Reunion will be on view. For the exhibition’s opening weekend, Saturday, 13 February and Sunday, 14 February 2021, visitors will be required to book timed slots — either in advance, on Norval Foundation’s website, or at the front desk.

The Reunion will be accompanied by a catalogue edited by chief curator Owen Martin and curator Khanya Mashabela, with a text by Van der Watt and an interview with the artist by Mashabela. The Reunion appears alongside Alt and Omega by Jackson Hlungwani and iiNyanga Zonyaka by Athi-Patra Ruga.