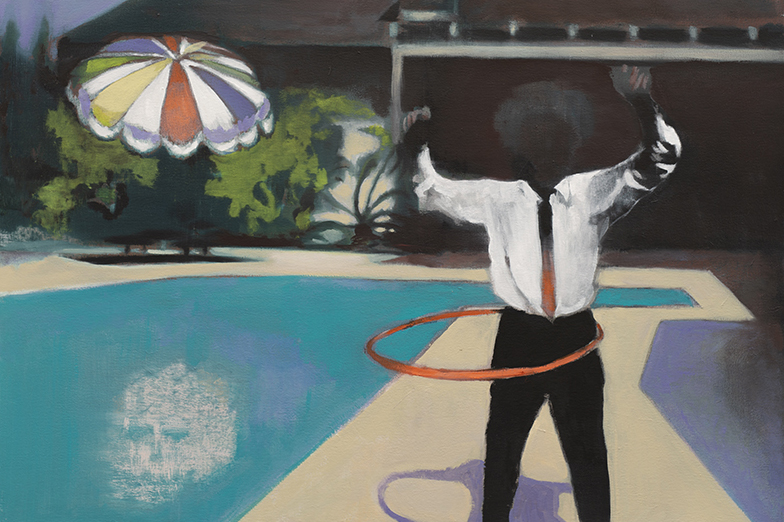 Let’s get cool in the pool. – Holger Czukay

Kate Gottgens has always been fond of a good swimming pool. Images of them have cropped up in her paintings for years as signifiers of suburban leisure. Her latest show is no exception, more than half of the paintings featuring a pool of some variety. However, in “Skyglow on Mars Black” (2020) at Smac Gallery, the swimming pool shifts into a broader, more expansive symbol than in Gottgens’ earlier work. At times detaching itself completely from its central role as a signifier of white leisure, the pool is deconstructed to bare geometry: a deterritorialization of the real; a line of flight from the suburbs to the subconscious. The paintings in “Skyglow” take the pool to its very limit as symbol, and as a site of difference.

An early example of the Gottgens swimming pool, from her “Black River Park” period (2011-2015), depicts a boy suspended in exorcism fashion above a regular suburban pool while a group of figures look on indifferently.[1] A woman’s face, large and faint in the grey air, smiles on. The pool here acts as a zone of peculiarity, its border is the demarcation between the status quo and the uncanny: the shadow of the boy lies distorted and stylised on the water’s surface. This ‘beyond normal’ quality Gottgens gives the pool in her paintings is not always so insistent.

In fact, the pool becomes a more successful trope in later work grounded by realism. The site of difference, in such work, is not marked by a levitating boy with a giant superimposed dream-woman, but may be as restrained as two girls lounging, comfortably naked in a blue pool.[2] The pool is not a portal to other stranger worlds but a space inside of this world, a space in which the economy of normal is temporarily suspended. Gottgens’ pools always have this quality of difference – as a bubble within the usual but separate from it. It is a ‘leisure’ space, inside of which the unusual performs its secret ministry. Inside Gottgens’ pools there is free play, anything is possible: from the sublime of the levitating boy, to small expressions of comfort, joy, relaxation, whose currency is transacted in the bathetic Xanadu of the twenty-first century: the swimming pool.

In many ways “Skyglow on Mars Black” is a return to a surrealist sensibility, aggravating nostalgic or kitsch imagery, by abstraction or violent juxtaposition, into the arena of the uncanny. The focus on 1950s American pop culture, for example; the decadent materialism of casino aesthetics, and, throughout the gallery space ‘50s crooner songs reverberate off the cold walls. From the red curtain, to the bunny-costumed girls in There Is No Ice (for my drink), one feels the weighted influence of David Lynch, or perhaps a similar fascination with the detritus of the modern.

The first painting one sees of “Skyglow”, hung outside of the main gallery space, is called The Wonder. In the painting, darkness surrounds a pool lit by red, pink, jets of light: an illuminated water fountain painted with Rothko intensity. Above the pool hover sleek white plastic disks – a water feature, rimmed with red and yellow, in a style characteristic of the mid-century modern. Vague indistinguishable shapes linger on the periphery of the pool, distorted. It could be the swimming pool of an old hotel or casino, but at first glance, The Wonder appears totally abstract, dream-like and menacing. There is something of Francis Bacon in the darkness of the painting and these slanted half-forms on the margins; a violence in the juxtaposition of textures between the ecstatic jets of light, the grim half-shapes and the ectoplasmic disks, at the same time plastic and cellular and proliferating. So The Wonder, and its complimentary cousins The Giver and The Gloaming – the three most abstract pieces of the show – all repeat and are centred around the oval shape of the pool, though “the swimming pool” is barely recognisable. As signifiers they secrete and veil their representations, shifting emphasis from subject to form. The swimming pool is reduced to bare form, bare signifier: ovoid, oval, ovum.

This bare-shape, the oval of the pool, is tonic to the whole exhibition. Like protozoa it multiplies and repeats compulsively in nearly every painting. The Peter Doig-like boat men in The Dreamer is Lost are swallowed by ovular shapes of the abstracted water; In Private Rites of Magic, the faces of the two circus performers are reduced to the bare geometry of their outline – two ovals. Again, a smaller painting with big David Hockney energy called Empty Hours, still features the old style suburban swimming pool scene, complete with colourful brolly and deck chairs. A strange skull shimmers on the surface of the pool; a man in a shirt and tie, hoola-hoops wildly, his face erased, reduced, like the circus performers, to the outline of an oval. The form repeats itself again in the hoola-hoop, again in its shadow, and again in the ellipse of the shimmering skull.

In Nude Descended, a woman is rendered in the dim light of a lobby, beside her a white-lit modern Space Odyssey-like staircase dominates the composition. The text accompanying the exhibition, tells us that the architecture of the staircase “is unnervingly oral”.[3] And quite rightfully: the mouth is a pool, a womb, particles travelling faster than the speed of light, a black hole. The architecture of the staircase mouths the form of the fur-coated, high-heeled woman, but also mouths its deconstructed bare-form: silently it says ovary.

The entire exhibition is, in fact, a silent speech act of this kind, a speaking in bubbles underwater, the placing of a word in italics. The title, Nude Descended, no longer in Duchamp’s continuous form, suggests a completion of the event, an arrival at bare-meaning. But, perhaps this is more like an acceptance of infinite mouthings and multiplicities, no singular fixed relation between sign and signified, but repeatedly dividing ova cells of meaning, every painting, every oval contingent on the other. An arrival at negative capability, or the site of difference, as a cyclic return to a state of fluidity and flux, a swimming pool, a skyglow on Mars black.