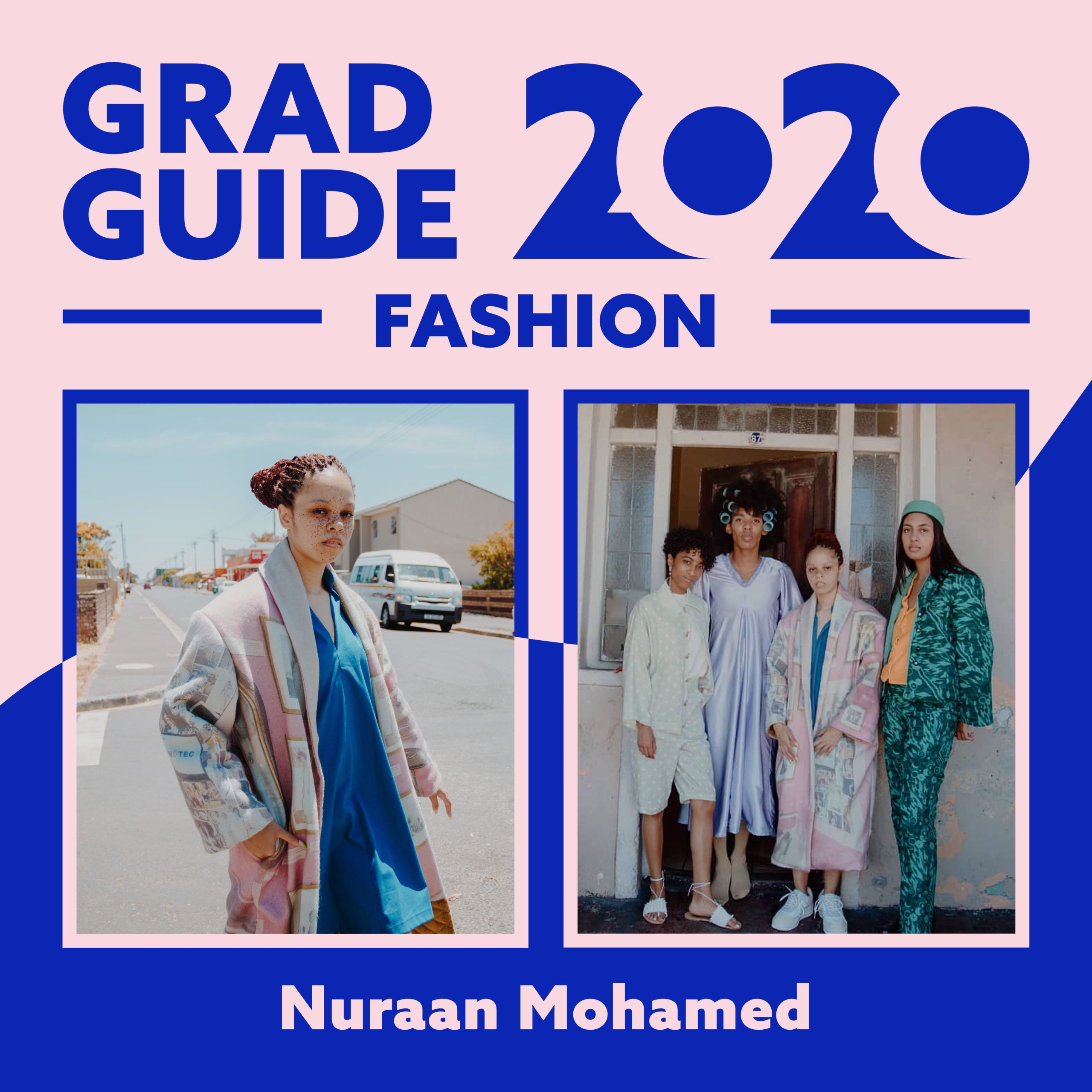 For her final year collection, Cape Peninsula University of Technology fashion design graduate Nuraan Mohamed was inspired by the history of Cape Town’s District Six – in particular, the life and work of drag artist and hairdresser Kewpie. In a conversation for our annual graduate showcase Mohamed tells us more about switching paths to pursue fashion, her research at the District Six Museum and designing garments with longevity.

Where and what did you study? What was your experience like?

I studied fashion design at Cape Peninsula University of Technology’s (CPUT) Cape Town campus. My experience was quite memorable – being in an environment with so many different personalities who educated and influenced me on a daily basis with their knowledge and creative ideas. I could also say that it has been quite a rollercoaster due to the pandemic taking place in the beginning of my third year, but you actually end up taking that setback and utilizing it towards something much greater than you had initially envisioned.

What inspired you to pursue a path in fashion?

From a young age, I was drawn to the creative field. My mother enrolled me at the Tygerberg Art Center for about two years at the age of eight. I remember being so astounded when I’d see sculptures and garments on installations in the corridors. That is when it set a spark in me when I realized that there was something more to what I saw my future self being. My grandmother has also had a big influence on me. She worked at the Ronald Sassoon (now Sissy Boy) factory for over 40 years. I was always inspired by the stories she would tell of her days working in the design room. People always told me that there is no work in the fashion industry, this is when I got sidetracked and just settled for another field. I went on to study early childhood development after I matriculated in 2015. Six months down the line, it was the morning of my first exam and I just decided to not go. I knew that was not where my heart was. Three months later I applied at CPUT for fashion.

Tell us about your graduate collection in terms of inspiration, style, concept and construction?

Drawing inspiration for a graduate collection is hard because I feel that it has to be something personal that resonates with you – something that you continuously keep building onto. At the beginning of last year, I was fortunate enough to go to the District Six Museum and get a real experience including the hustle and bustle atmosphere of tourists before the pandemic took over. I jotted down all of my findings but what attracted me instantly was the Kewpie exhibit. Eugene Fritz, also known as Kewpie was a prominent figure within the District Six era. She was a drag queen as well as a hairdresser. The exhibit was a salon scene, very carefully curated. It consisted of a vintage hairdryer alongside a table that stored rollers and a few other hair tools that were used in the salon. There were pictures of Kewpie and her friends covered on the walls in this exhibit. It was really something special. I was drawn to the setup and pigmentation of the objects. Standing in that setting just took me back to another era.

I personally feel that hairdressing culture is such a valuable, yet historic component. The feeling of having your hair done and coming out of the salon is priceless. As a child I would always tear a picture out of a magazine, go with my mother to the salon and tell them “that’s what I want.”

I wanted the silhouette of my garments to refer back to the 1960s. I printed the Kewpie exhibit onto melton fabric and constructed it into a coat along with the lining being quilt. The whole idea was for it to resemble the time when gowns were quilted and seen as a staple item when gifting trousseau. The use of prints throughout my collection were evened out. For example, one look was quite minimalistic but the print was designed in such a way that it related to the old Marshall Bros bottles (Double O) that was manufactured in District Six at the time. Each garment was designed in a way that it portrayed a certain type of character.

My concept was called “The working-class women of District Six”. My aim was not for it to refer to struggle and the forced removals because reading through my notes gathered from the museum and from different sources, I got somewhat a sense of unity as District Six was seen as a vibrant time to be alive. I wanted my collection to be just that. You’re coming home from work after a long day and passing by your friends in the road whose sitting on their neighbor’s stoep or at the local salon – the simplicity in every day things. The concept was built on a number of different aspects of research, recipe books, pieces of newspaper articles that my father had from the New Era Magazine in the 1980s and also information from the District Six Museum combined with research that I had extracted from books at the local library. It was everything combined.

With regards to the construction of the collection, I was really pressed for time. University closed at the beginning of March and resumed again in mid-August. We only had three months to make an entire collection which included patterns, samples and the final garment. Myself and a few classmates stayed on campus until 9pm most nights towards the end. Along with the collection, we had to shoot a film. My film was shot in the late Kewpie’s hair salon in Kensington.

How would you describe your approach or philosophy as a fashion designer?

I do not follow any particular design approach. I feel that it is important for your personality to have an outward reflection on your clothing. That is a way of expressing one’s self. Design does not necessarily have to be attractive to the next individual. If you are able to have a few pieces that really move you and that you know you’ll still find beautiful in the next 10 years, then that is what you should invest in.

Who would you most like to collaborate with in the local fashion industry?

Definitely Celeste Arendse from Selfi. I love how Celeste is constantly being innovative and finding more ways for her brand to be more ethical. I was at her old studio in Loop str about two years ago and upon entering the store, I just took a glance and thought to myself – it is unreal how the set up of the store and items from other local designers which were on display could instantly relate to this woman’s craftsmanship. It’s like everything from concept to final layout is done with such great intent. With fast fashion being such a negative factor globally, I think that designers like Celeste is such an asset to the environment. Not only can you see that her garments are well-researched, but she also caters to everyone. She does not create garments, but creates timepieces that are made for your comfort. Something that you could wear to a classy event or simply just to lounge around in.

I plan on completing my Btech and diving into menswear this year.