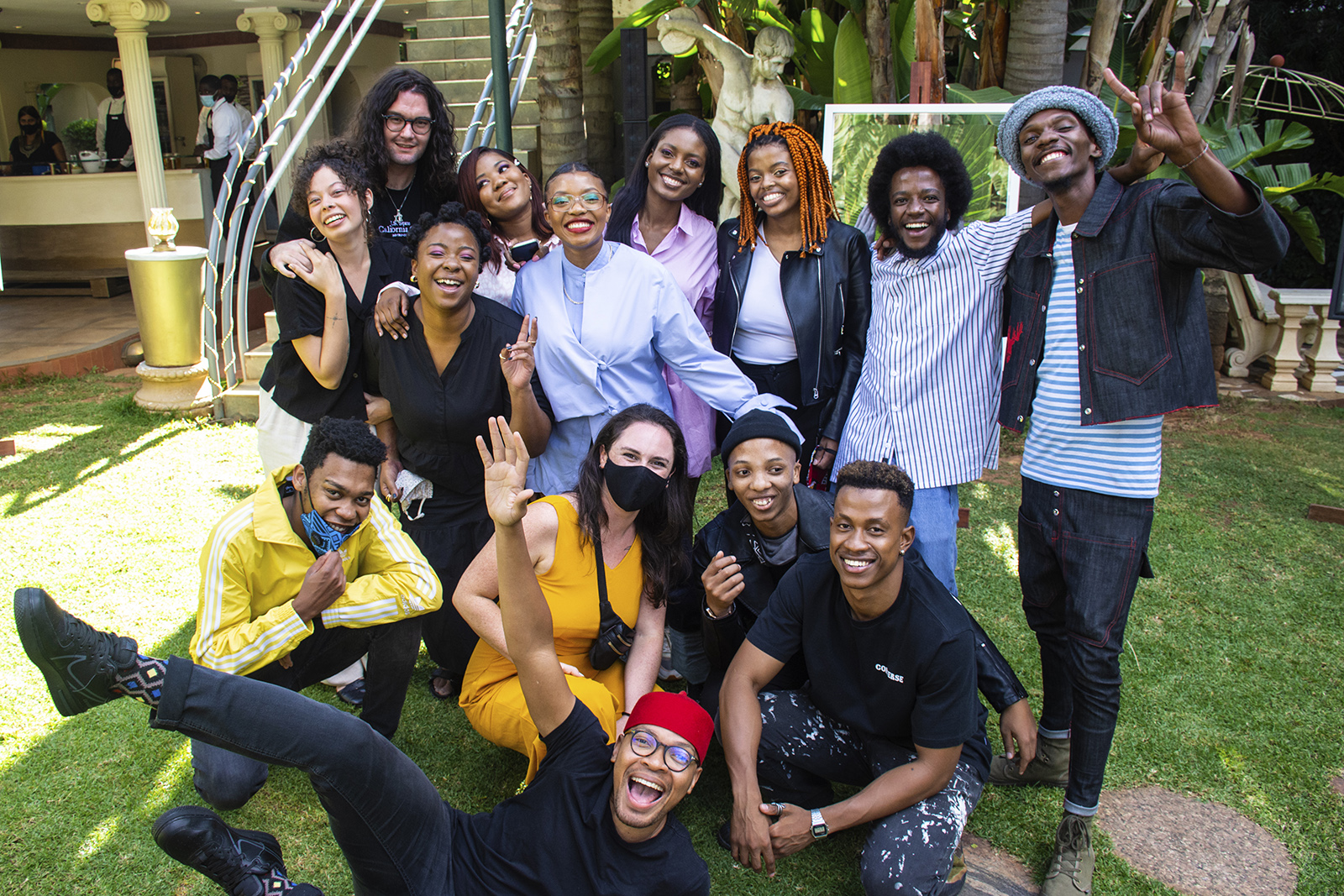 Last year, Yogi Sip called on digital artists to submit their best work to join the Young Creators’ Network competition – a platform by the brand aimed at upskilling the youth and offering them a chance to grow their creative practice. The competition offers the winning artist a once in a lifetime opportunity to design Yogi Sip’s limited edition packaging for Youth Month, as well as a cash prize of R20,000.

After going through over 600 submissions and having the tough job of choosing shortlisted candidates, a curatorial panel including representatives from Yogi Sip, Between 10and5, as well as last year’s winner Masonwabe Ntloko and original Yogi Sip designer David Tshabalala, selected the 15 artists who went forward in the competition.

A networking event and exhibition held on Saturday, 27 March at the Villla Simmone Boutique Hotel in Houghton, Johannesburg, was the final stage of the year-long search for the next artist to design the brand’s limited edition Youth Month packaging.

After much anticipation, Joburg-based digital artist Phila Hillie was announced as this year’s winning artist who will receive the opportunity to design Yogi Sip’s limited edition packaging for the month of June, and a cash prize of R20,000. Hillie is a notable creative on the rise, whose striking creations landed her a spot on this year’s Top 15 list. With her Instagram page as her gallery, the 23-year-old architecture graduate uses her creative talents to celebrate women in her work, striving to help women to see themselves without the external pressures of society. Read more here.

Much like Hillie, the rest of the artists in the Top 15 were highly talented with distinctive artistic styles.

Carolyn Tyler is a 23-year-old Cape Town-based fine artist and designer. Taylor’s work explores mental health and aims to break the silence around the illness. This topic is especially important to her after having struggled with mental illness from when she was 16. Read more here.

Soweto-born self taught fine artist Millandrie Molotsi first picked up drawing when she was ten years old, but only started taking it seriously after she was selected to showcase her work at her former high school’s art exhibition. Her style has grown around abstract minimalism and line art, while her work explores the representation of human beings – with an emphasis on self-acceptance. Read more here.

Sanele Matsolo, a storyteller at heart, creates soulful work with a nostalgic feel, allowing viewers to relive moments shared with friends, family and their community. His work focuses heavily on societal issues and is inspired by his surroundings as well as his observations from the community he was raised in. Read more here.

Larissa Mwanyama’s creative journey was highly influenced by the matriarchal lineage that raised her and their teachings through African traditional storytelling; using imaginative parables along with visual theatrics to invoke a physical understanding of a life lesson. These teachings and her upbringing shaped her use of imagination, sense of identity, and creative journey. Drawing inspiration from childhood cartoons, books, and her family archive of oral teachings, Mwanyama’s work explores themes that stem from concepts of motherhood and mothering, imaginative ethereal landscapes, intersectional identity, memory, and social knowledge distribution. Read more here.

With the intention of positively representing black women and visually narrating their stories, Sinomonde Ngwane’s work often explores and responds to issues of vulnerability as well as the lack of representation of black women within the media. To bring these creations to life, she draws inspiration from various artistic avenues, places, conversations, and her personal experience of being a black woman in South Africa. Read more here.

Amy-Leigh Braaf’s artworks focus on surrealism – inspired by the magical realism in the novels of Haruki Murakami, the costume designs by Eiko Ishioka, as well as films by Park Chan Wook, Wong Kar-Wai and Ana Lily Amirpour. Women are often the center of her creations – they are depicted in distorted worlds, often alluding to current events. Read more here.

Johannesburg-based illustrator, Keamogetswe Sediane is a U.J graduate with a degree in multimedia and an honours degree in design, specialising in UX design. By focusing on issues of colourism, she aims to create work that empowers the everyday woman – embracing their beauty, pain and strength. She shares that her work is not the conventional beauty that is seen as popular in society, and thus distorts and exaggerates features in her illustrations, with the aim of depicting the realities that women face. Read more here.

Prince Nhlapo is a promising creative from Vanderbijlpark, an industrial city located in the south of Gauteng. He fell in love with words when he was in grade one and thus began his creative journey as a poet. However, poetry was soon replaced by music after he started experimenting with music. His counterpart Manthe Ribane’s ability to incorporate visual arts into her music inspired him to start exploring visual arts as well. “My work is mostly conceptual storytelling through visual arts, I explore any theme that makes me ‘feel’ something. My base is emotions and demonstrating my feelings through art,” he says. Read more here.

Nompumelelo Mdluli, also known as Mpume, is a digital designer by profession, a children’s book illustrator by passion, and an author by chance. Her work explores spirituality, and most of her pieces feature female figures. Read more here.

Leo Rheeder is a 23-year-old graphic designer from Potchefstroom who enjoys working in different mediums from painting, drawing, digital design, illustrations, animation, and graphic design. Rheeder is interested in the stories that the motherland, Mzansi has to offer, and is passionate about exploring themes that are in relation to South Africa. Themes such as Ubuntu, which place focus on the essence of human virtues, compassion and humanity are Rheeder’s driving force. Read more here.

As an animation fan, Zico Mthethwa’s interest in art grew after he had realised his desire to recreate the cartoon characters from some of the shows he would watch growing up. In grade three, he began tracing out these characters, paying much focus on Dragon Ball Z’s lead character, Goku. Mthethwa’s illustrations draw inspiration from the work of African American artist Ernie Barnes, whose work uniquely captures the energy and lives of fellow African Americans. Read more here.

Lorenzo Plaatjies’ Instagram serves a feast of spectacular and emotive artworks proving why he could possibly be one of the best graphic designers in Johannesburg. Having first come across the artist’s work through his spell billing digital works in 2016 – a project exploring longing and sadness – he’s been on our radar as an artist to watch. Read more here.

Lethabo Huma uses her creations to communicate her thoughts and emotions. Tackling her childhood challenge of being unable to express herself has influenced the central theme of her work. She also intends to form a connection between her work and the viewer by telling stories. Read more here.

Nhlanhla Kumalo works as a freelance visual development storyboard artist, animator, and dabbles in film. He specialises in concept work and character design, with a large portion of his work revolving around fantasy themes in Africa. He draws inspiration from Studio Ghibli films such as Spirited Away and video games such as Final Fantasy. A large portion of his style and work is influenced by Japanese film and gaming – with the intention of learning a few tricks from their work and incorporating it into an African medium. Read more here.