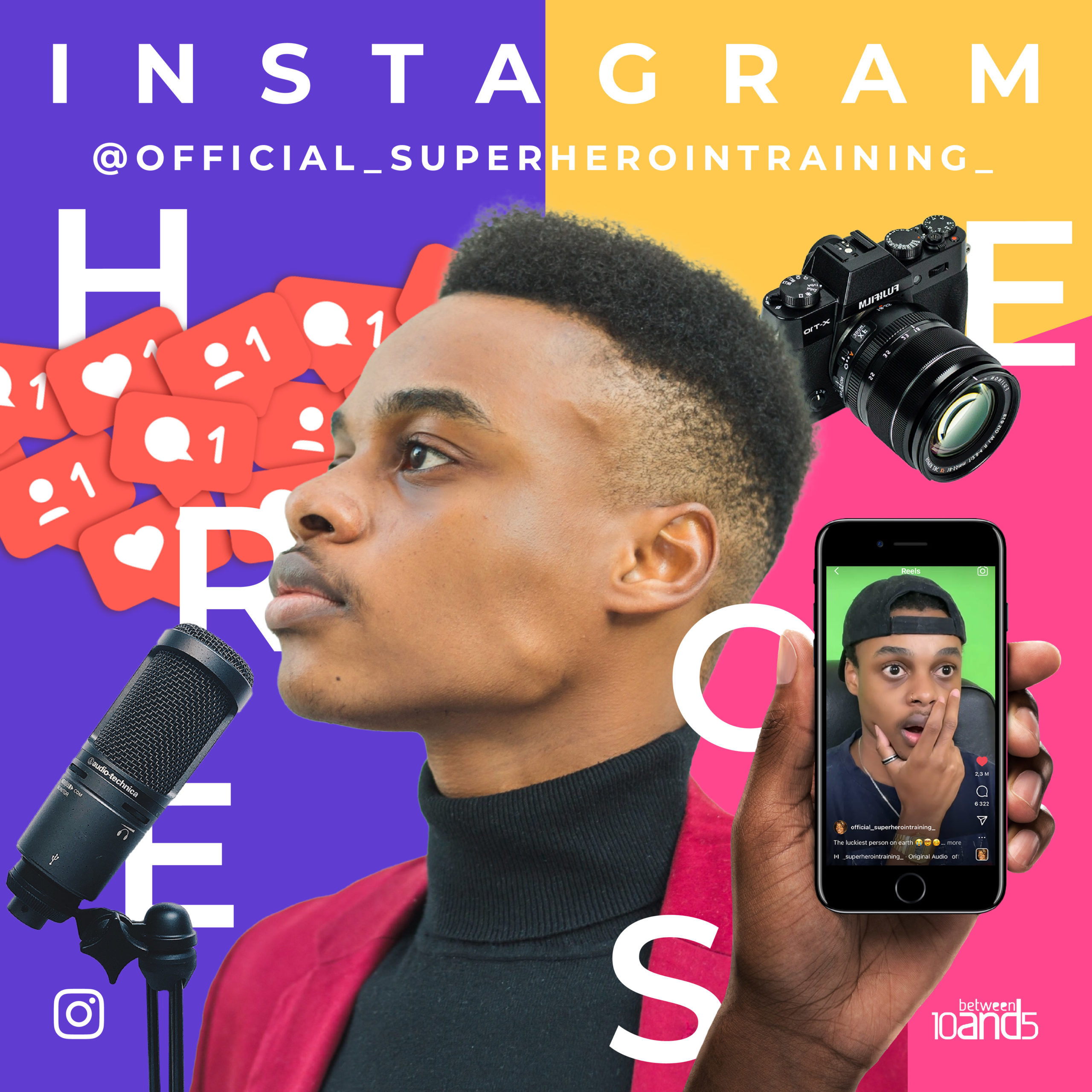 Actor and content creator Tevin Musara, who you may know as Superherointraining, is the April winner of our Instagram Heroes awards series – an accomplishment he views as “motivation for the African child to dream hard and work harder.” Harnessing the power and reach of social media, Musara connects with his rapidly growing audience daily. Thanks to eight million followers on TikTok and over 700k on IG he was the most viewed content creator in Africa for 2020. His advice for young local creatives is to stay authentic, saying “there’s an audience for everything.” We caught up with him to learn more.

Your Instagram page is full of hilarious content, what led you to this life as a comedian and actor?

I’ve always been a creative at heart. I’ve always been a bubbly character, whether it was doing family talent shows or traveling around South Africa by myself to participate in dance competitions. The people around me always knew that I was going to pursue a career in the creative arts. I took drama as one of my majors in high school. So it’s always been written in the stars. In 2016 I got accepted to the University of Cape Town to do my honors degree in theater performance, specialising in acting. I started a YouTube page called Superherointraining and I would do skits on there. The quality was really bad, but I kept on going. Being someone who has a competitive side to  them I always knew that that was just part of the process and I was just mastering my skills as an actor, editor, writer, videographer and director. As time went by, my skills improved and the quality of the videos took a massive leap in the right direction. That then transformed into what you see today as eight million followers on TikTok and nearly 700K on Instagram.

In a few words, how would you describe yourself?

I am an ambivert. If I believe in something I’m going to do it. I am someone who loves to consume information and I’m extremely competitive. I’m like a chameleon; I adapt quite easily to  my surroundings and circumstances. Family orientated, a risk taker, and I’m God-fearing.

In reflection, what has this journey been like for you, especially gathering a following of 696k followers?

I’m fairly young so it sounds weird when I say it’s been a long journey, but it has been a really long journey of creative moments that took off and so many that failed leading up to this success. A lot of companies approaching the Superherointraining brand for collaborations attempting to lowball it. However, I stood my ground through all the storms  and finally now we’ve reached a point where things are falling into place and companies are taking me seriously as a force in the industry and the most viewed content creator in Africa (2020).

Tell us about the ways in which you use Instagram to grow your brand and build a community?

Everyone is aware of Instagram and the power it has to connect you to your audience and  brands. When it’s done right it’s a powerful tool. I get to connect with my audience each and every single day on the platform by just clicking a few buttons. Is the easiest way to reach  out to people in the most effective way.

What does winning the “1000 Grams of Likes” award mean to you?

It’s an exceptional award to have under your belt. To be recognised for such a prestigious award is a dream not just for me but for the African child who has dreams like me and sees themselves in me. Every creative wants to be recognised for all the hard work they do and the crazy hours they put into mastering their craft. And so it’s a motivation for the African child to dream hard and work harder because this moment is a clear indication/reference that great things can manifest themselves out of that.

Do you have any tips for local creatives just starting out – both in terms of their unique offering, and how they go about marketing this?

Dear local artists, stay true to who you are, there’s nothing worse than seeing someone fake it. Create content that you love. Staying unique is what makes you stand out. If you believe in yourself there’s other people who are going to believe in you. One thing I learned is that there’s an audience for everything. There is no greater power than knowing that you’ve been yourself and people love you for who you are. Don’t build an empire out of straws (a fake persona) build it out of brick (your true self). We all know what happened to the straw house when the big bad wolf came blowing. Another tip: write all your ideas down. Lastly, and most importantly, know when to take breaks to stay sane, look after your mental.

What is something that 10and5 readers may not know about you as a person?

A lot of my audience think that I’m American and they get so surprised when they found out that I’m actually South African. I want my African people to know that I am their own. That a child of the soil did this. Another thing is that I don’t have a manager in South Africa. I have a manger and agency in the USA, so if there’s any top-tier managers who would like to jump on board, let’s do it.

What can we expect from Superherointraining and you personally in 2021? Any projects or collaborations to keep an eye out for?

2021 is full of promises. There’s a lot of things in the works which I can’t obviously discuss due to client confidentiality. However, one thing that has already taken off is I am a part of the TikTok Rising Voices program, and I just recently got interviewed by BBC News as a top up and coming influencer from Africa. I wish I could tell you everything because I’m so excited but I will leave that to the imagination for now.