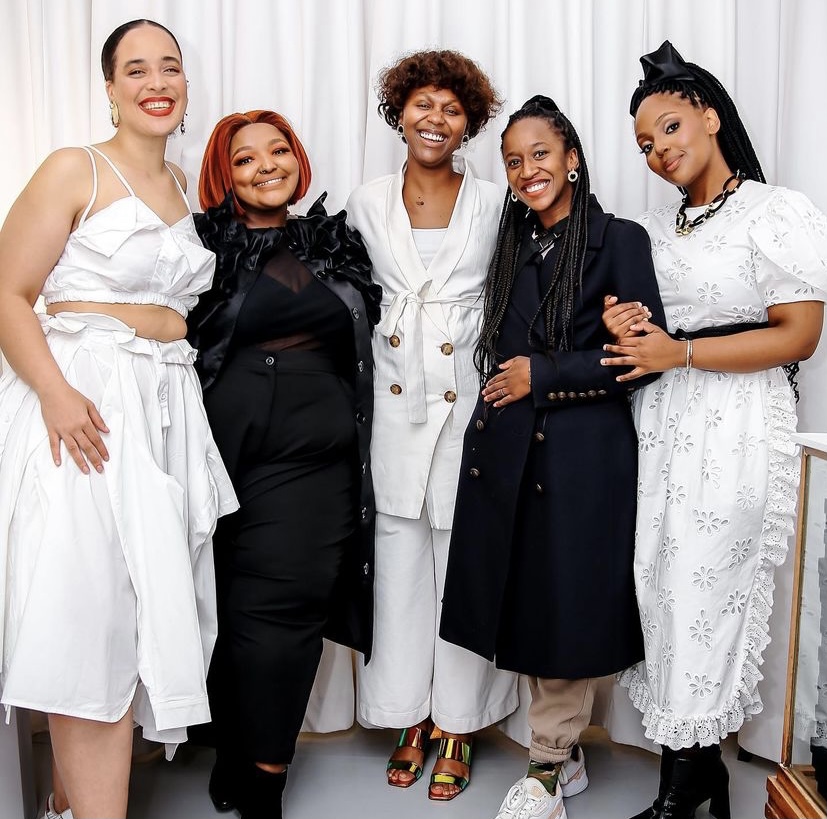 Bloom Org. hosted their conversation series called Women in Bloom at the Pichulik atelier studios in Cape Town, Friday 4 June. The stunning showroom was adorned in the PICHULIK’s Autumn/Winter 2021 Circe Collection created by founder and designer Katherine Pichulik. Katherine revealed that the idea to host Women in Bloom at these studios as well as in the Mother City was a dream two years in the making.

Bloom is a women led organisation co-founded by creative, strategist and curator Nandi Dlepu; who looked ravishing in an all white ensemble as well as Farai Simoyi, a veteran in the fashion industry based in New York. Bloom aims to create a community for creative women by providing a space to nurture not only their professional but their emotional well-being as well. The event boasted an all women production team as the refreshments, entertainment and conversation were all led by women led companies and artists. Praisy Dlamini of Adama Wines introduced their first branded wines called HER Collection. She is part of a female collective of eight winemakers who have passionately contributed to the success of their company. She affirmed the company’s mission to express what force and power women can be when they come together as well as inspiring other women to take up space and use the opportunities available to them.

The panel featured remarkable creatives who are making incredible strides in establishing and blooming in their careers. Panelists included Digital creator Yoliswa Mqoco

Fashion designer and joint Prize Recipient of the 2020 LVMH prize, Sindiso Khumalo along with independent curator, co-founder and Chief Marketing Officer of Victory of the Word, Anelisa Mangcu.

Panel host Danielle Bowler led us on a conversational journey exploring themes on what inclusivity and connection look like in the creative industry as well as each of the panelist’s definitions of success. The conversation aimed to answer questions of how these factors influence the creative industry as well as how the creative entrepreneurs on the panel use them as guides to ensuring that their work remains true to their professional and personal mission.

Matriarchal lineage was highlighted as the driving factor towards the success of the amazing women in attendance. This further cemented the value of inclusion and connection as it echoes the statement that “I am because you are” and that through sharing of resources and forming strong unions, women are an unstoppable force planting the seeds for future generations and reminding us that the power is indeed in our hands.

Yoliswa traced her success back to the confidence and strength instilled by her family, more particularly the influence of her mother. Her journey is emblematic of how acceptance, unconditional love and support empowers you to dream big.  It can also fuel a sense of confidence strong enough to break through even the toughest barriers. She relays how important it has now been to her to have made an impact in the personal journeys of other women who embody all the things she stands for.

Sindiso introduced the concept of de-individualising success to the panel discussion. She also invites us to interrogate who we are bringing along with us on the journey. Success can be gravely personal but how can we ensure that more women are reaping the rewards? By putting the women who are behind the scenes to the forefront, she reminds us that success is often a joint venture. Questioning whether the people we bring along would have had a seat at table and if not, how can we facilitate the process of foregrounding their efforts, talents and journeys?

Anelisa Mangcu reminded us of the importance of  breaking the glass ceiling when you enter spaces as a black body, by highlighting the importance of taking charge of the stories we tell about our experiences and doing so as authentically as possible. She highlighted how as the cofounder of Victory of the Word, they are committed to adding visibility to the creative space and to birth more access to the creative space for the very same people behind the stories being told. The aim being to move towards digitising existing and future archives as well as to provide a fund for the custodians behind the art.

The night was brimming with wisdom, stories of courage as well as honest reflections on the challenges creatives face within the industry. The studio was filled with sounds of jovial laughter and the soothing sounds of Danni Bowler who graced us with an exclusive performance of records from her upcoming EP. The exciting and much anticipated night was enriched with wisdom, beautiful faces and honest conversation that mirrored sentimental interactions with your closest friends while inspiring you to be daring, tenacious and to stand firm in your personhood.