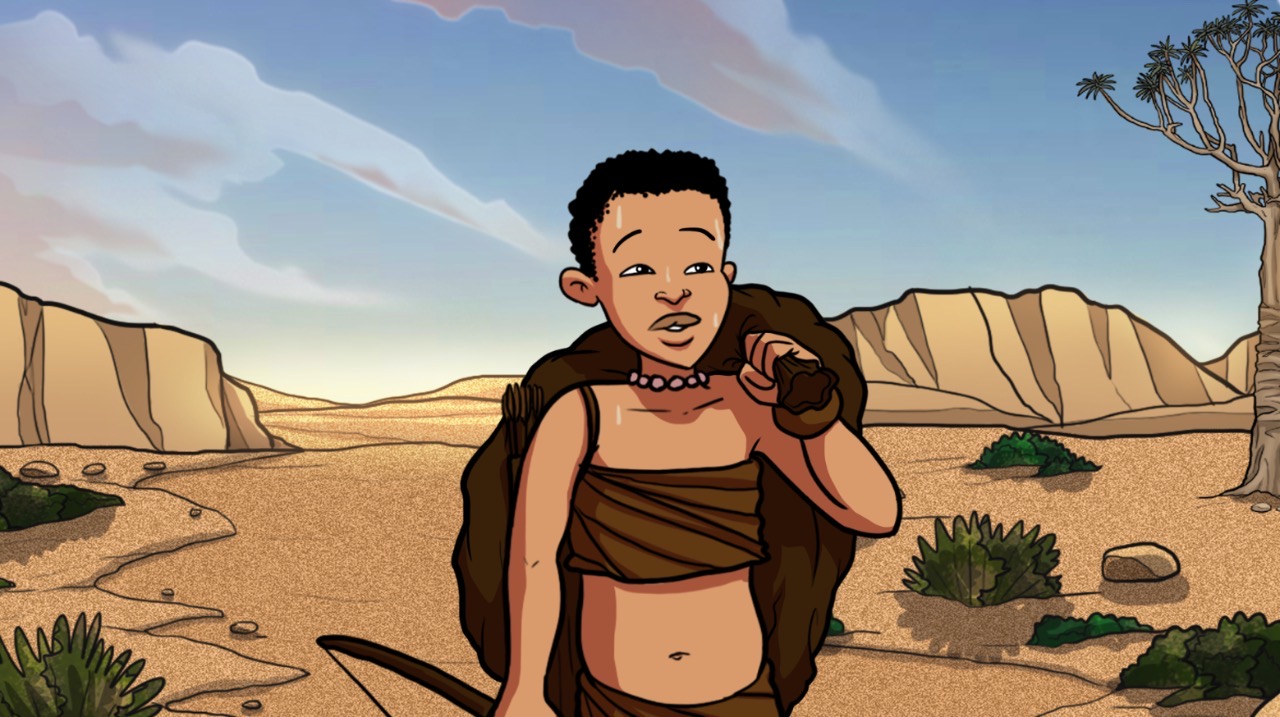 This animated web series is a Nama & Afrikaans language story, a young girl from Richtersveld was born with a gift to communicate with the rain, animals and plants. This gift will be a blessing for the Nama people of the Richtersveld community. An old wise woman in the community guides her to use this gift for the greater good. The child is then acknowledged in the community having a lot of expectations from her when she is older. Read on as we talk to the creator of the animation series Deidre Jantjies of Na Aap productions about her point of departure for this body of work and more.

A huge dryness comes over the small Nama community one day, rain has not been coming to visit their landscape anymore and itcreated a shortage in food and water. This is because of the way that the community was reacting to the blessings of the Rain.
The community has been wasting the water and has lost their respect for water, they no longer acknowledge Rain the way they always have in their tradition. The children were not acting according to the customs and this disrupted the cycle of the rain. She goes on the journey of finding Rain, asking him to send blessings on their land.

The child walks for many days to find the Rain as he is very busy and an important part of nature. She finds help from a plant and a lizard that could guide her into the direction of the rain. When she finds him, he is stubborn and makes her go back to speak to her people in order for them to know that their actions made the rain stay away.

Who is Deidre Jantjies and what drives the work that you do?

Jantjies is a cultural activist passionate about the historical stories of women. I founded  Na Aap Productions, a fully integrated, broad based production company, screening untold stories of Southern Africa. Having a long history of stage performing, I took these skills and started writing my own stories that I’m creating into animation, short and feature films. Working extensively on narratives closest to my heart. Stories that include indigenous heritage and traditions that have been forgotten, is the most important dialogue that I want to create. In 2020 I directed & produced ‘Love Thy Neighbour’ that won International awards, partnering with an Indian storyteller. i also wrote, directed and produced ‘Stories in die Wind’ a web series that tells the indigenous story of a young girl finding her purpose.
‘I am driven by representing my identity and making my heritage and history known to the world.’

The creative team consists of Dav Andrews and Clinton Jones amongst others. How did you all get to collaborating and merging your processes?

I pitched the project to the Programme for Innovation in Artform Development (PIAD) at the University of Free State. And out of six projects “Stories in die Wind” was chosen, I had to find amazing animators that got what I was trying to do with this indigenous story. So I reached out to Dav Andrew, who had shared an animation video on facebook that I really liked. I then tried making contact with him via email, whatsapp and facebook messenger. When I finally got  hold of Dav, he then introduced me to Clinton Jones. I sent them the story to hear if they would be interested in working on the project together. They loved the story and said yes. We then worked towards the Vrystaat Kunstefees 2020 online festival, where we showcased it for the first time. Our team was small, but we made it work and I was so happy to see the vision come to life. I also wanted to introduce the indigenous music into the story and made contact with Garth Erasmus who composed the music, adding the feel to the amazing visuals. Dav then also gave me an idea to add the Nama language as subtitle in the animation so I made contact with Dina Christiaan who is a Nama speaker from the Northern Cape.

What place do you think a body of work like Stories in die Wind has in the creative industry and cultural preservation?

It has become such a powerful tool to have conversations about, representing the First Nation indigenous people of Southern Africa. ‘Stories in die Wind’ is a body of work that is opening doors for itself, the work has potential to be on international broadcasters and is a resource to develop more content like it. I believe that we should be reflecting more on our african heritage,  this  way we create work that is true to who we are, as Africans we have a responsibility to our lineage and by making ourselves known. So “Stories in die Wind” is a pioneer for more African stories to be told and distributed on international broadcasters.

I have always loved theatre and it was a great part of my life. Theatre shaped me into the confident woman that I am today. But during my performing days I felt like something was missing and my joy was not the same as it was when I started performing. I then  found a new love in filmmaking, it became the most exciting and effective way to tell an indigeous story. The emotional journey of writing a story and making it come to life brings so much joy to the soul and when the work is done, people get to see and feel a part of you.

What’s next for Deidre?

I am definitely working on other projects that I will be producing & directing. This includes feature length films and more animation films. Working towards getting a Netflix deal for an animation film that I will produce in the near future.

Get more information and watch the web series here