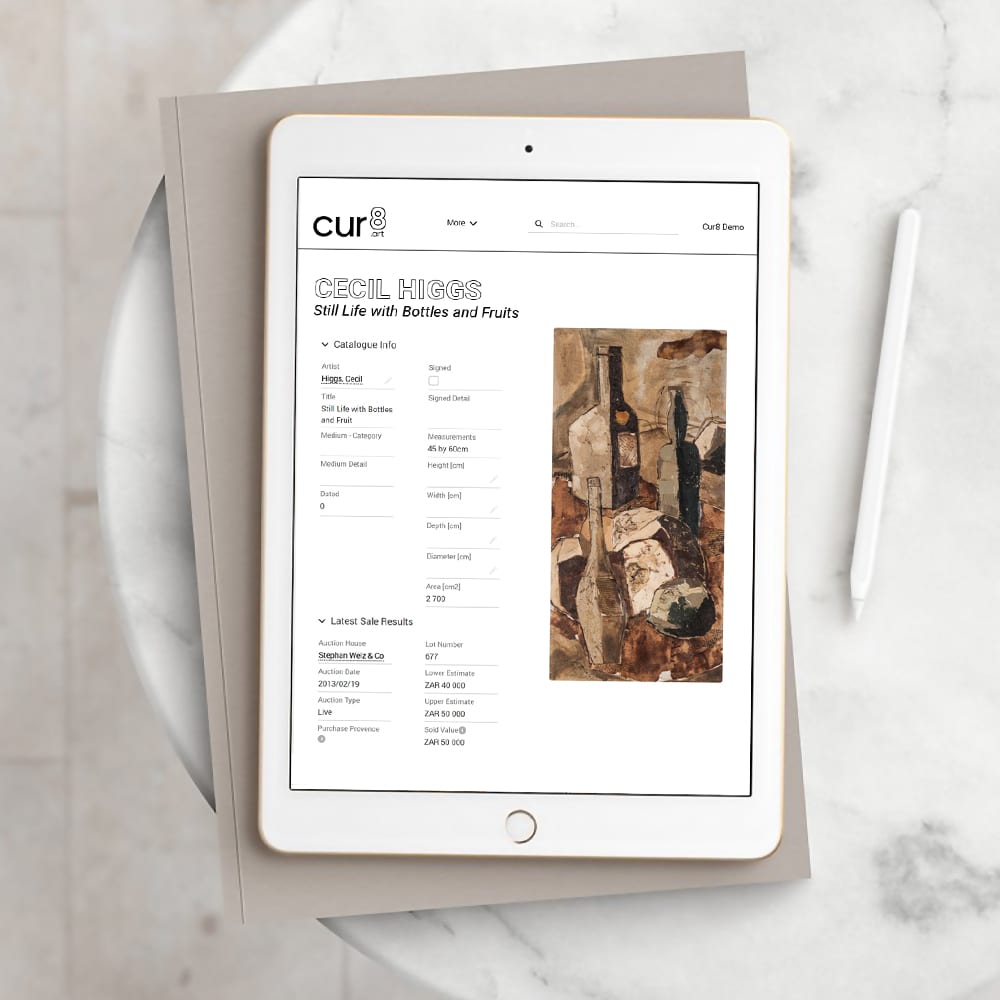 23 Jul Digitise And Manage Your Art Collection With Cur8

Whether you’re an artist who wants to track what their works are worth and how that value grows as your art changes hands or if you are a collector who is curious about the value of your art collection, Cur8 has the solution for you.

But above and beyond that, they also provide access to the African art world through their news content, social media channels and newsletters, for both established and aspiring collectors.

Earlier this month, White Cube, the powerhouse London gallery founded in 1993 by English art dealer Jay Jopling and home to artists such as Tracey Emin and Damien Hirst, announced its exclusive global representation of artist Cinga Samson. The deal cements the 35-year-old Cape Town painter’s extraordinary rise to international prominence over the last three years, as well as highlights the place of Black figurative painters – among them South Africans – in a rapidly transforming cultural marketplace.

Samson is a self-taught painter. He came to the medium of paint after studying photography at the Stellenbosch Academy of Design and Photography in 2010. “He was quiet and reserved in class but when he engaged what he said was considered and had value,” recalls his teacher Deryck van Steenderen, a commercial photographer who also engaged Samson as an assistant. During shoots Samson spoke of his deep interest in painting, which he worked on at Isibane Creative Arts, a shared artist studio in Khayelitsha, Cape Town.

“Initially he worked mostly with pastel crayons on paper but as his financial situation improved he worked more with acrylics, initially on paper and then on canvas as he was able to afford it,” says Van Steenderen. Following appearances in exhibitions at the AVA Gallery and Greatmore Studios, both in Cape Town, Samson held his debut solo with Blank Projects in 2015. The subjects of his flatly painted compositions included flower arrangements and groups of menacing white men in fashions reminiscent of Dutch Baroque painting.

In 2018, Blank Projects took Samson’s work to an international art fair for the first time. Collectors attending the Armory Show in New York jostled for his 80 x 60cm portraits, which were individually priced at $10,000 and quickly sold out. The following year, Blank Projects devoted its entire booth at Art Basel in Miami Beach to Samson. The offering ranged from small self-portraits priced at $7,500 to large group portraits priced at $55,000, all of which sold out. Rival dealers took note.

“What really drew me to the practice is how he explores the nuances of collective and individual identity, refracted through the experience of life in South Africa, as well as the remarkable handling of his chosen medium,” says May, who visited Samson at his studio in early 2020. “The process he has adopted to make the paintings is extraordinarily painstaking – with highly detailed under-drawing, thin layers of paint applied, wiped down and then reapplied – the result of which gives the work a shimmering, almost other worldly quality.”

Samson’s first solo exhibition with White Cube is scheduled for July 2023 in London. His paintings are currently priced between $45,000 and $185,000. These are retail prices, as distinct from auction prices. Samson has a stellar if negligible auction track record. In February 2020, auction house Strauss & Co sold an untitled flower study from 2015 for R238 980. Last week, New York auction house Phillips established a remarkable benchmark price for the artist when it sold a 2018 portrait, Two piece 1, for $378,000. These prices put him in the same league as post-war painter Alexis Preller.

Take Armitage. In November 2019, an enigmatic figure painting from 2015 titled The Conservationist went under the hammer at Sotheby’s in New York. The work unexpectedly sold for $1.52 million, more than 21 times its high estimate. Armitage’s auction debut was no flash in the pan. In October 2020, 56 bidders chased after a schoolboy portrait Armitage made when he was 17. The work sold for $571,000, nearly 20 times the high estimate. Boafo’s record at auction is equally remarkable, by value and lots sold, although also bedevilled by stories of backroom deals and rampant speculation.

It is not singularly international galleries with multi-city footprints who are outmanoeuvring South African-based galleries. The commercial rise of “Black figuration” – to use popular shorthand for a diverse genre – has prompted some artists to entirely bypass galleries in favour of more direct methods of engagement and transaction. Online channels like Instagram have emerged as a key discovery tool.

“Instagram has been so transformative,” says Lerato Motshwarakgole, a Botswana-based cultural entrepreneur and founder of creative consultancy Ora Loapi. Motshwarakgole points to Johannesburg-based printmaker and painter Nelson Makamo’s use of social media to connect with buyers as exemplary. “The exclusionary velvet rope of the previous business models of fairs and galleries is all but rendered pointless at this moment,” says Motshwarakgole, who has previously collaborated with Makamo.

Makamo shuns exclusive gallery representation, opting instead for hybrid modes of trade. He is not averse to collaborations with commercial galleries. In March this year, he held a solo exhibition with Everard Read in Cape Town. The show featured examples of Makamo’s pop portraiture depicting young black subjects in the style of his celebrated 2019 Time magazine cover featuring his cousin, Mapule Maoto. The works offered at Everard Read were priced between R78,000 and R1.4 million. The exhibition drew “a broad and enthusiastic audience,” says Charles Shields, a co-owner and director of Everard Read. “Happily we pretty much sold out too.”

In distinction to Samson, the secondary market for works by Makamo in South Africa is robust. Aspire Art Auction has sold a dozen lots, while rival auction house Strauss & Co has shifted 99 lots. In July 2020, Makamo’s oil on canvas Portrait of a Girl Wearing Earrings sold at Strauss & Co for R455 200, a secondary-market record for the artist. The price is still a long way off the six figure sums commanded by Beauford Delaney, Ben Enwonwu and Gerard Sekoto, post-war painters whose practice links the current riotous innovation fuelling the art market to a long and venerable tradition of figurative description of Black lives by Black artists.

Sean O’Toole is a journalist and editor based in Cape Town. He is a contributing editor to Frieze magazine.