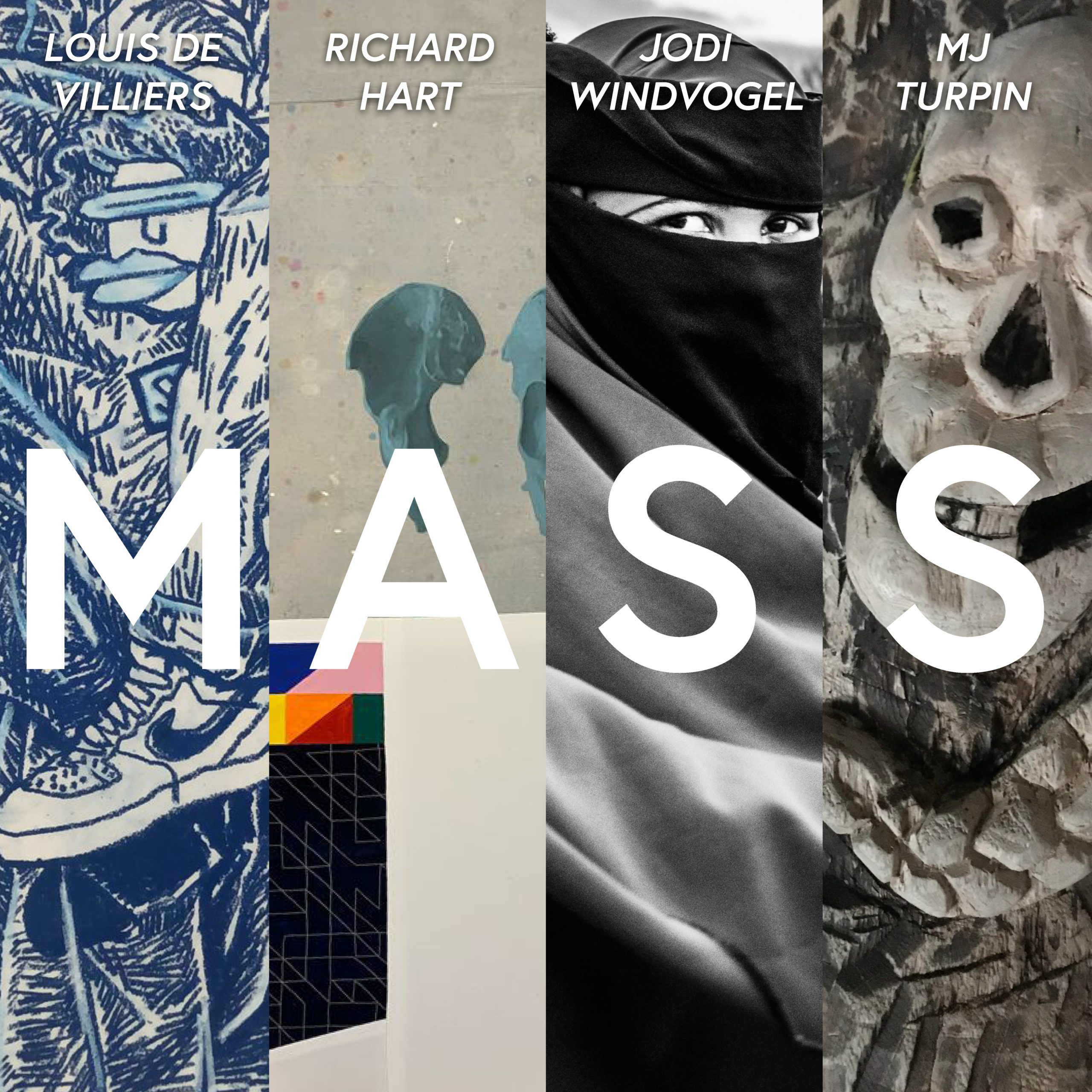 A multidisciplinary group exhibition featuring the works of Louis de Villiers, Jodi Windvogel , Richard Hart and MJ Turpin is happening at Kalashnikov Gallery The physical exhibition ends on 31 August 2021 but will remain available for viewing online.

MASS: to assemble into a single body.

MASS: to gather and accumulate

MASS: a large body of matter with no definite shape

MASS: a majority, ‘The Masses’

MASS is a congregation of practices and ideas

MASS is drawing and painting and shooting and assembling

MASS is connecting the North to the South

MASS is not quite what it was intended to be.

MASS is existing IRL and Online

Louis de Villiers (b. 1987 Empangeni, South Africa) is a visual artist, art director, and graphic designer currently living and working in Brooklyn, New York. From 2006-2017, he worked under the alias of SKULLBOY, and has exhibited throughout South Africa, Berlin, New York and Amsterdam; as well as made murals from Johannesburg to Hong Kong.

Since 2011, de Villiers has worked primarily in black, white and gold leaf – transitioning into his ‘Blue Phase’ in 2019 as his practice developed. Continuing to working primarily on large-scale-works on paper, his scenes explore themes of post-internet culture, social media and Iconography of Success through a metaphorical jungle-society.

In this most recent body of work, he shifts focus from subjects to the possesions that define them. Still rooted in his core practice of markmaking, he explores how we project so much about our taste and affiliations by the things we’ve come to collect. All of which has become a familiar visual language through the proliferation of Instagram that cultivates this economy of clout through curated projection.

Working primarily in painting, but also in printmaking, ceramics, video, photography and installation, Hart’s work collages figurative and abstract elements to speculate upon radical futures where the mystical and physical, magical and mundane coexist. This process of building worlds from disparate elements is informed by African religious and spiritual practices where superstition, traditional medicine and ancient rituals are fused with western religion to create new belief systems.

Jodi Windvogel is a freelance documentary photographer and filmmaker, working between Cape Town and Johannesburg, South Africa. Her work is rooted in community. With themes focusing on displacement, land, gender and gentrification, she strives to address and highlight socio economic strains with the focus on marginalisation. By using her camera, she aims to dismantle the iconography and stereotypes of words and images attached to people of colour.  She was a women photograph mentee for the class of 2018-2019. She is also a member of the African Photojournalism Database.

MJ Turpin (b. 1982. Johannesburg, South Africa.) He received his BA Fine Art (Honours) Degree from the University of the Witwatersrand and has since participated in numerous local exhibitions as well as international exhibitions in France, Germany, Holland, and Morocco. Turpin currently Directs a Studio complex and Residency Program called Studio Grey, co-

directs P72 Projects and Kalashnikovv Gallery, which are all based in Johannesburg.