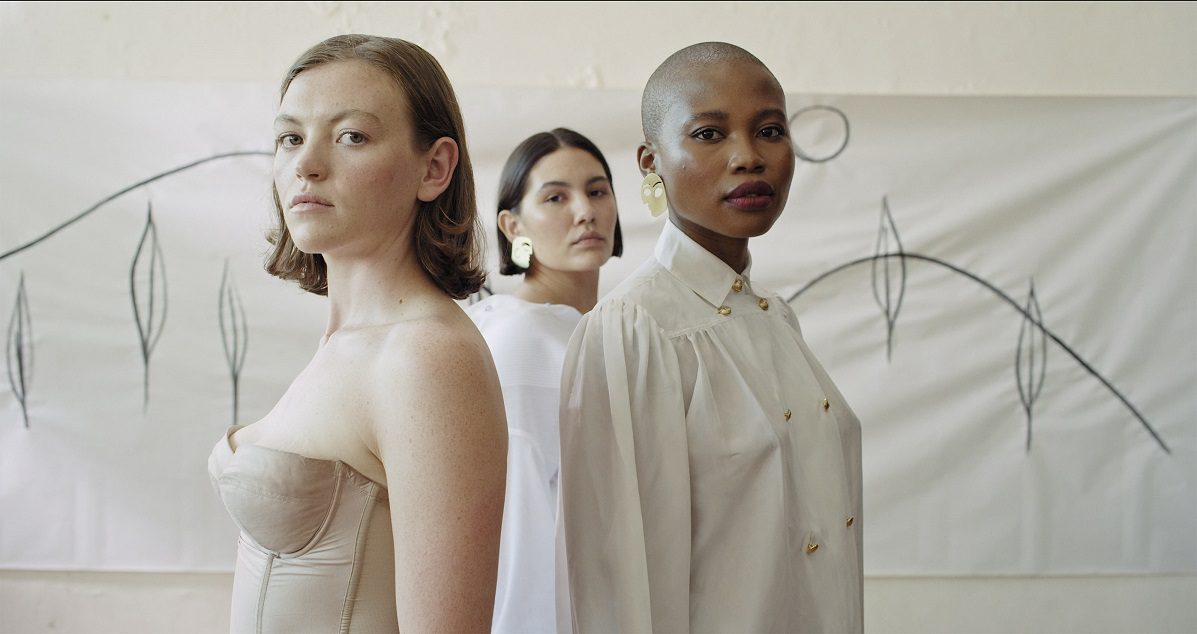 Giselle Human of South African accessories brand Waif, has found its visual expression in a new short film in five parts. Entitled A-E-I-O-U, the series sensitively explores and highlights mental health issues arising from our global experience of the Coronavirus pandemic in order to offer healing.

“Self-care and attention to our relationship with the self has never been more important,” states filmmaker Francesco Nassimbeni. “The global pandemic, compounded with the existing stresses of our hurried, outward-gazing lifestyles has resulted in a global mental health crisis. It is evidently a crucial time to reflect on what is important to us, what nourishes us, what brings us peace. ”The notion of ‘safe space’ was integral to the discussions between designer and filmmaker. Implementation of safe space was used not only to construct the world of A-E-I-O-U, but also provided a useful methodology in bringing people together to focus on the neglected practices of gentleness,softness, sensitivity, and empathy.

“Work created with care expresses care – and inspires care, too. This is the social wish of the film. We wanted to make an artwork that strongly advocated for the transformative actions of meditation, mindful togetherness, expression, and the pursuit of calm,” Nassimbeni explains.

An award-winning multi-hyphenate, Nassimbeni has had a multidisciplinary career encompassing fashion illustration, theatre directing, arts education, graphic design and creative writing. He directed and designed the hit play “You Suck, and Other Inescapable Truths” with clown and comedienne Klara Van Wyk, who is the first woman to receive a PHD in clowning in the southern hemisphere. “You Suck, and Other Inescapable Truths” was nominated for a Kanna Award and a Fleur du Cap, and won the Standard Bank Ovation Award.

Nassimbeni’s novella for young adults, The Skin I Live In, has been translated into 6 South African languages. His radio drama The Paper, about a student newsroom at the time of a statue controversy, comes to the SAfm airwaves in 2021. He recently made the Top 10 in Netflix’s Realness Project for his screenplay, “You Me They Them”. A-E-I-O-U is not only his first film, it also marks his debut as a director for brands, a direction Nassimbeni intends on pursuing further. “Yes, I come from a theatre and performance background,” he admits. “I’ve always wanted to make films, though. People have been asking me what took me so long and I’m not sure what to say! What excites me right now is how I can translate the principals that guide my theatre-making process, and convert them into the film medium. My primary focus is on the actor, but I am also very interested in how picture, text, performance and graphics converse.”

Nassimbeni took on the A-E-I-O-U project for multiple reasons, most of which are intensely personal yet relate deeply to the zeitgeist. “I had a gruelling December. I caught COVID, and a lot of things were up in the air. In fact, COVID caused a lot of mental instability as my anxieties about the future and the present loomed terribly. I made the film as medicine – to me, to the crew, to anyone feeling like things were spinning out of control. I wanted to make something soothing; a tonic to the dark, tumultuous world events that have been stressing everyone out, making our souls feel small and diminished,” he says.

Nassimbeni’s own experience of the Coronavirus and its effects relate intimately to Human’s own creative process with The Many Faces of Depression. “I was truly depressed,” he shares. ”I had gone through a number of traumatic experiences – a death in the family, a big break-up and move across cities. This all culminated in a moment of unravelling …there was a point where I could no longer keep up the appearance of productivity, happiness, or growth.”

As a coping and processing mechanism, Human “started drawing the first thing that came to mind: Faces. The face is the stage of our emotional state. And I drew every emotion I’d become interested in. Melancholy, grief, longing, but also the ones that are part of me as a human and that have (thankfully) not gone away: Surprise, exuberance, stillness, gladness. I explored every emotion and with every one, I affirmed its validity. Because sadness is valid, grief is valid, exuberance is valid, and gladness is also, truly, valid.”

The drawings eventually culminated in set of stylised faces rendered in metal and formed into statement earrings and these new pieces feature as part of the progressive wardrobe styling in A-E-I-O-U. Nassimbeni was driven by a burning desire to create an extraordinary activation for Waif as he believes that it is crucial to bring conversations about mental health into the mainstream.

“You wouldn’t hide from the public that you’d broken a leg, and yet we are still urged to hide the fact that we might be anxious, or depressed. I think it’s important to normalise talking about mental health for this reason, to introduce the idea that it is not shameful to address these issues in conversation, media and art. I do detect a shift in popular culture in the right direction. The pandemic has forced subjects of isolation, anxiety and depression into the light because the pandemic has exacerbated a looming mental health crisis, that needed to be talked about. The interview between Harry and Oprah, though just one interview, forms part of a greater global necessity for bringing these topics into every day conversation,” he says.

It is this intention that informed his work on A-E-I-O-U. The hyper-adaptable, chameleon-like Nassimbeni conceived, wrote, produced, cast, and directed the series of films. He even brought his considerable array of talents to bear on composing and performing the original score.

For the videography, he elected to work with Director of Photography, Pierre De Villiers who is arguably one of South Africa’s most eminent cinematographers. A 2020 Berlinale Talents alumnus, De Villiers’ latest short film “Mthunzi” premiered at the Locarno Film Festival and screened at several other festivals globally, picking up the Jury Award for Best Short film at the AFI Festival, and Best Cinematography at the European Film Awards.

De Villiers recently completed photography on a Francophone series for Canal +, “Mami Wata”, which was shot in Gabon. His second feature film “This Is Not a Burial, It’s a Resurrection” premiered at the Sundance Film Festival in 2020, where it won the Special Jury Award for Visionary Filmmaking. The film continues to travel, having won a further 27 awards, two of which were for Best Cinematography (at Montclair International Film Festival and The African Movie Academy Awards).

With A-E-I-O-U pooling all these significant talents, the resulting film sits in a liminal space at the intersection of both genre and sector. It is neither pure commercial nor is it high art. It stars dedicated theatre actors versus models. It is conceptual rather than literal and its main aim is to address a societal issue rather than pursue a retail outcome. As such, it represents new-wave production that places purpose above profits and is a sterling example of how the creative industries remain relevant as the interpreters of our modern, post-pandemic condition.

Fulfil your own need for art in the time of Coronavirus by watching A-E-I-O-U on Vimeo as a full collection – https://vimeo.com/533872654 – or as stand-alone short films of approximately one minute each:

For more information on Waif visit www.waifthings.com and follow @waif_things and @francesconassimbeni on social media.

Written and directed by:  Francesco Nassimbeni