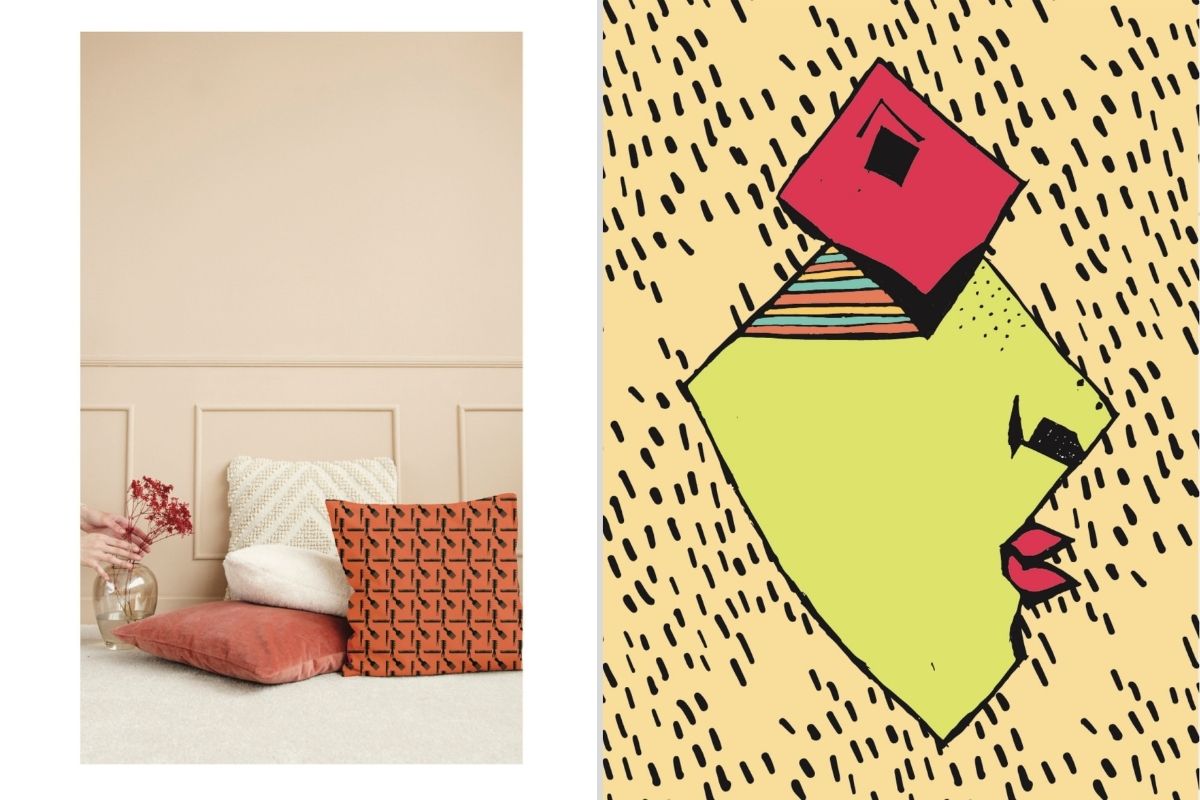 What does it mean to be unashamedly black? Zilungile Hanise, a 29-year-old illustrator, textile designer, and founder of Uhambo Concepts, as well as a recent V&A Waterfront Artist Alliance Incubatee, responds to these questions. She completed her studies in interior design at the Inscape Educational Group, and here she discovered her passion for photography, furniture, and textile design, and how all of these elements contribute to the spirit and beauty of spaces. We engaged about her love for her family, what finding God meant for her and how He plays a significant role in her creation process, the heights she expects to reach, and her journey to finding herself. I admired her compassion, her humour, her friendliness as well as her willingness to express herself in isiXhosa anytime she wanted during the interview.

Tell me about your biggest influences, what drove you to pursue art?

I think the biggest influence for my art has been like my life experiences because that’s where I draw inspiration from; like childhood trauma, living in South Africa as a black woman, you know, my relationship with God, the ups and downs of like anything I go through and the healing processes. I always draw from that and create art from that as a testimony to share with people. I’ve used a lot of mediums growing up, but now I’ve settled into textiles and illustrations more because it’s what’s always been there but it’s just never really explored it you know because I never knew that I could actually live off art. I grew up in Mthatha, so I was not really exposed to that to design in the art world until I came to Cape Town.

Can you tell me about the whole process coming creating your body of work, iLifa? How did it feel? What were the thoughts that went into it?

I remember it was 2017 and I was going through a very rough patch, I just lost my friend my family was reuniting because a few years ago my grandmother passed away in 2013. It was really a remembrance thing, so I decided to take pictures nje, and I didn’t know something was going to come out of it. At that moment I saw the changes that happened after she passed away because you know oomakhulu, they are a pillar of the family, and when she passed away a lot of things ebezifihlakele zaphuma, scandals, it was rough. So I was just talking about that whole experience of how even though she was the glue, she also hid a lot of things from us that we should have known now we have to deal with that pain of realizing that, ‘Oh no, we’re not as unified as we thought, we’re not that perfect family that we thought we were.’ There was no more pretend now because she was not there. So I think of having to have acknowledged that okay, this is how my family is now, in my concept, those rose-coloured glasses came off. Having to grieve that now it’s just a lot for me because it was messy. I got to a point where I realized that I needed to forgive and I needed to heal to move on because imagine going through that and having to heal from a loss of a friend and it’s just a lot happening at the same time so it’s just like you know what, let me just go through that process of acknowledging ‘ba okay, kunje ngoku, how do I move forward from that as myself because my identity was so embedded in my family?’ I realized that I had to become uZilungile without them because I realized that if my family is falling apart then I’m falling apart because my identity was embedded in them. I needed to discover myself, ndingubani without them? Who am I without the security that they usually provided?  So it’s basically a story about healing and becoming.

Earlier on you mentioned your relationship with God; does that impact and influence the way that you create?

It definitely does. It weighs heavy, a lot in terms of concepts that I really focus on, what I’m working on now is called: A State of Vulnerability. I realized that I always have to be in a state of vulnerability. In order to move on, I had to look at myself, love myself, and know that I am enough. You know, as a society, I realized we struggle with being vulnerable, it is seen as a weakness. So I want to shine a light on it and actually show that it is one of the biggest forms of strength a person can have because, with vulnerability, we have to deal with the shame and the brokenness. You know, my journey with God has really just helped me understand who I am as a person and also I am and what He has created me for, you know, because I’ve always struggled with that in terms of what am I supposed to do with my life? I’m putting myself out more because I realized Artist Alliance came at a point where I was beginning again because I never actually shared my work to a point where a lot of people recognize it, I’m starting again so I’m really excited for what this training is going to bring.

Talking about Artist Alliance, what were some of your highlights?

The highlights for me actually have been in the first lessons because we were doing our business plan, I’ve never done anything like that, and I’ve struggled a lot when it comes to it. We were genuinely just helped to narrow down to what exactly we want to do and how exactly we’re going to do it, and in terms of money as well because it’s always been like a taboo thing you know, so we were helped a lot in terms of finding our worth and not being afraid to actually define it. In any form of creativity, we always struggle because people don’t see our value, this has really just given me that confidence in my work.

If you had to have dinner with three people who would it be and why?

What do you have in the pipeline for 2021? Are you still working on your homeware collection?

I am, well I haven’t been, but I do want to. I think I have a vague idea for it. I want to create a whole new collection like pillows and rugs because I think that’s how my illustrations and my textiles would be translated nicely. It’s still in the initial stage of it. I’m actually redoing iLifa in illustration form now and I actually want that to be exhibited hopefully sometime next year. And in terms of fashion as well, because I also want to be in the fashion industry, but mostly like streetwear, I’m starting a fashion brand called A State of Vulnerability. I think that’s why I was saying that Artist Alliance came at a really pivotal point in my life.