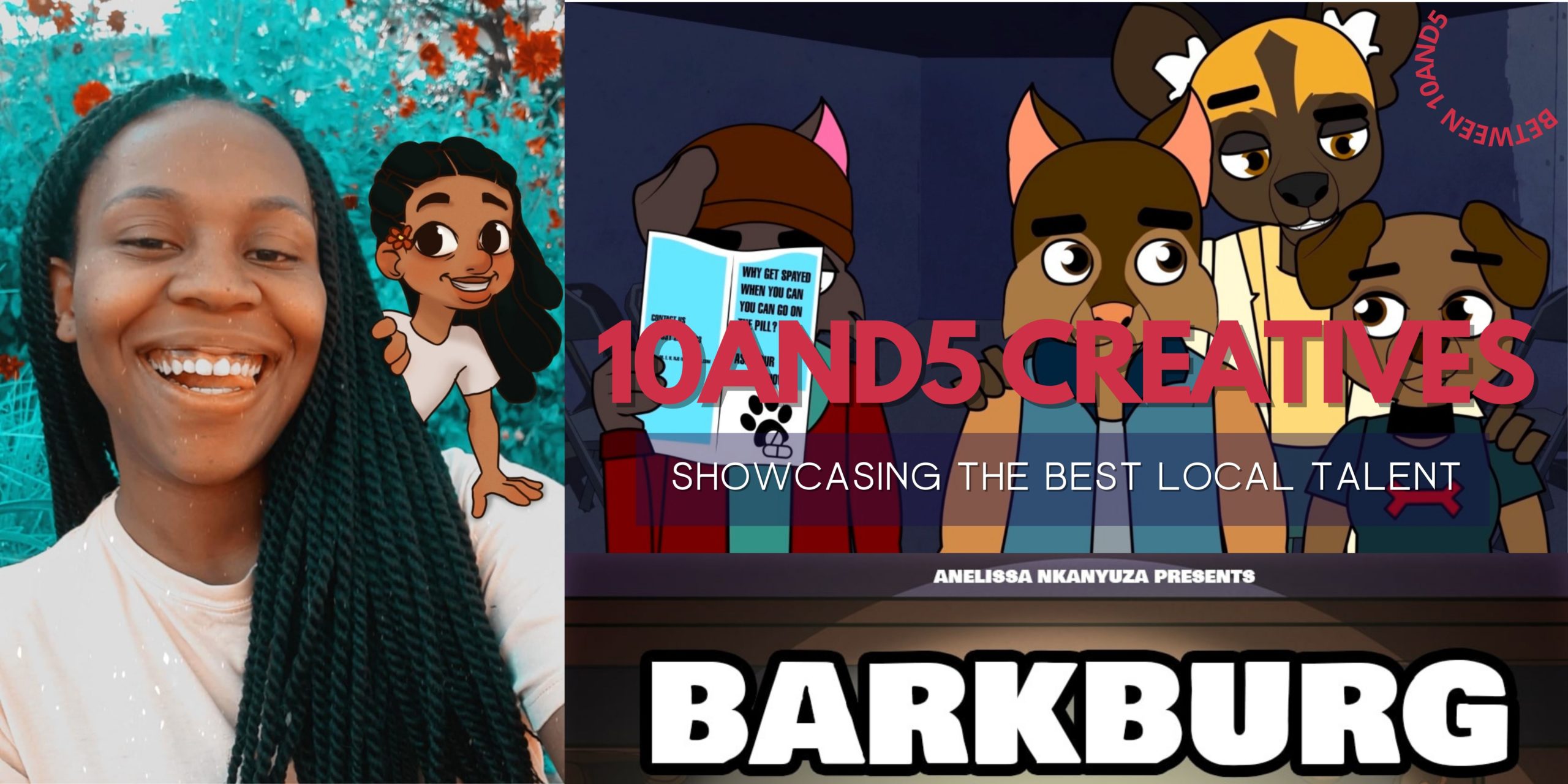 29 Oct 10AND5 CREATIVES VOL. 05: STORYTELLING THROUGH DIGITAL ART AND ANIMATION WITH LISA NKANYUZA

This week we caught up with Lisa Nkanyuza, a digital artist who forms her craft in illustration, animation and game design. Her latest project, Barkburg, sucks us into a world resembling the dog-eat-dog entertainment industry – inspired by adult animated sitcoms. Read the interview below:

Who are you?
My name is Lisa Nkanyuza, also known as LisaTriesToArt. I am a digital artist from South Africa. I specialise in digital illustrations and animations – as well as, dabbling in game design. I am also an avid lover of storytelling. I enjoy using my animations and illustrations to share stories and build heartfelt worlds.

Where does your story begin?
Let me take you back to when little Lisa spent a little too much time watching her favourite animated films, like The Lion King. And I’m talking about the 1994 version. Don’t come at me with that 2019, bro. Ever since then, I have always felt that animation enthralled me with all its possibilities. And it allowed me to express myself, vividly.

How did you get into animation and design?
Story time! I started hacking at animation using Microsoft PowerPoint. After seeing what my siblings could make out of it, I slowly made my way into it too. I began using Jasc Animation Shop, and I would animate short little clips. Most of these clips featured my dogs. I really love my dogs. After that, I sort of explored other creative avenues, like comic-making and illustrations. And then I realized, “Dang, I’m actually pretty good at this!” – This is the point when I developed a keen interest in comics, video games and concept art. I later found myself studying game design at University.

Walk us through your creative process.
My creative process: step one – cry (I joke). But seriously, I am not quite sure if I can pinpoint my creative process exactly. I find that being exposed to different media, different
places, interacting with different people just sparks a, “Oh wow! This person/thing would make a cool/weird/funny animation or illustration,” moment. To go into technical detail about my creative process, my weapons of choice are Adobe After Effects, Toon Boom, Photoshop and Clip Studio Paint. When ideas do come to me, it is at the most random of times. I have like 20 seconds to write it down or screenshot it or save it somewhere in my mental backlog. Once I have all these different sourced-material, I sort of Frankenstein them into a music video/comic/illustration idea. And I roll with that.

What is Barkburg?
Essentially, Barkburg is an adult animated pilot for a series that follows the three main characters – Kae, Phobe and Aya. Viewers watch as these characters navigate the dog-eat-dog entertainment industry of the city of Barkburg. And if you could not already tell, there is a lot of dog-themed puns in there. This project is something I have always wanted to develop. It is not necessarily the story itself that I had in mind. But I have always told myself that one day I would make an animated series. In my final year at University, I told myself, “Girl, you better go big or go home!”, I wanted to prove to myself that I could do it. Gosh, darn it! I guess I did.

How did you choose which story to tell with Barkburg?
Barkburg was born from my love of adult animated satirical comedies, such as Archer and Bojack Horseman. I love the use of economic animation and witty humour. It gets me every time. I decided to make the characters Aya, Phobe and Kae based upon my siblings and me. In Barkburg, we are portrayed as creatives trying to make it in the big bad city of Johannesburg. From there, the story basically just wrote itself. I wanted to show each character’s role within the story, as well as their relationships and interactions with each other. I also wanted to showcase their world as a parallel of modern day South Africa.

Who are some of your role models and why?
I suppose my brothers are my role models. They kind of got me into the whole creative arc of my life. I often gather inspiration from their work and work ethics. Shout-outs to them!

What is the work you’ve done that excites you the most?
I have worked with quite a few musical artists to create visualizers or animated music videos. I must say, whenever I am given the opportunity to merge animation, music, and
storytelling – I get goose bumps! I enjoy working with artists. Developing new forms of expression for their music excites me. It is pretty cool.