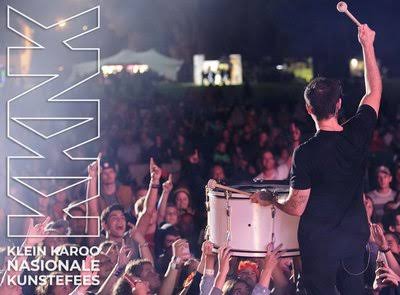 Being a local city girl from Cape Town, my anticipation for this famed arts festival was high. I was excited. I had not been to Oudtshoorn before, so if you are in the same shoes I was in, here is a story to learn from…

My journey to the Klein Karoo Nasionale Kunstefees started at the Cape Town International Airport. I boarded a 50 minute flight which landed me in George, and following that, I had to drive from the East coast, up – towards Oudtshoorn. A cool thing about this trip for me, was the opportunity to see and meet some of the festival goers who boarded the same flight. There were band members joking and laughing across flight seats to one another, there were friends-of-friends who planned to see a specific part of the festival, and there were also locally well-known actors and singers who I was still to become more familiar with.

About 1 hour passed, and our flight landed in George, at George Airport. My journey continued.

I found a local taxi driver. The drive towards Oudtshoorn would be a long one. But, it was full of spontaneous sight-seeing attractions. Unknowingly, I really entered a plain of South African land which showed me the depths of this country’s beauty within the Western Cape.

Oudtshoorn is a quiet and calm place with a very distinct old charm feeling – if you imagine it without the Festival. The festival itself brings a lot of culturally-engaged social energy to the town, and this compliments so well with the stillness of Oudtshoorn. If you were there, you would feel liveliness streaming through the social landscape.

The KKNK invites a burst of live performances and music acts. To name a handful of music experiences we at 10and5 loved:

The Prince Vincent Building hosted a total of seven exhibitions which took center stage for its 2022 debut. The ABSA L’Atelier 2019 ambassador, Nkensani Rihlampfu, was a focal artist in this year’s roster and his exhibition, An Orchestrated Reality, curated by Dawn Sarah McGee is a key exhibition to take note of. McGee describes the emotive struggle presented in his work as, ‘the margin between reality and perceived reality, versus truth’.

His exhibition, as well as, Karin Preller for the exhibition Beyond Memory and Dineke van der Walt as curator of Rich in Fibre, have been selected by a KKNK panel as nominees for The Best contribution to the Visual Arts category of KKNK aligned Kanna Prize.

Since the beginning of the festival, individuals have been honored annually, and this year four exceptional people have received recognition: The author Jolyn Phillips receives the Arts Unlimited Prize for Young Voice and she is also seen at the festival in the debut production of her collection Bientang ; Nic Barrow, one of the founding members of the KKNK and the man who planted the seed for an arts festival in Oudtshoorn, is honored for his contribution to the KKNK; the ever-popular and exceptional actor Frank Opperman is honored with the Arts Unlimited Award for performance and the internationally renowned Mary Sibande is this year’s festival artist and will be central to the KKNK visual arts.

Plan your 2023 Festival experience and find out more from this year’s event by clicking this link: https://kknk.co.za/eng/