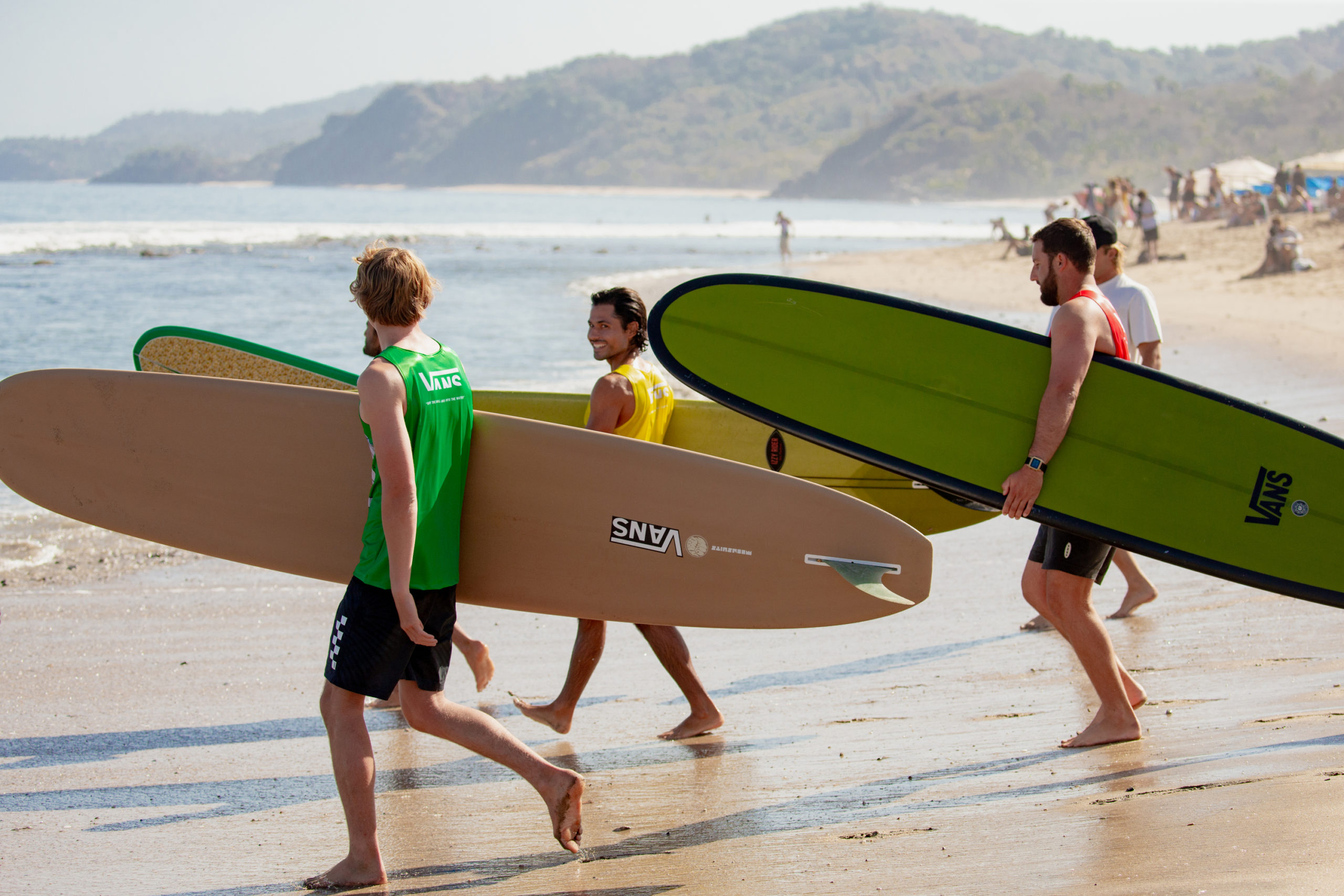 Marking its 10-year anniversary in 2022, the Vans Duct Tape event series gathered an international community of surfers, artists and shapers on the shores of Muizenberg beach.

Each time I visit Muizenberg, I am immediately charmed by the calm atmosphere of the surrounding nature and its people. The ocean-calling aroma in the air and the continuous mountain range are truly nostalgic for me. Looking back at my childhood days, Muizenberg Beach was always that one spot on the east side of the Cape Peninsula that made me feel at peace with the ocean. With my family, I would spend the entire day there either at the waterslides or at the main beach beside Surfer’s Corner. I personally never got into ocean water sports, but I’ve always enjoyed the feeling of floating in the ocean during low tide on a warm summery day. In the present, I had my very first surf session with one of my closest friends who lives at Surfer’s Corner. So, for me, this spot holds a lot of nostalgia. What brought me to Muizenberg this time around, and was a great pleasure to attend, was Vans’ revolutionary longboard contest.

Hosted in the hub of Surfer’s Corner on Muizenberg beach — a surf-paradise and iconic community where local surf culture is alive and thriving — the event brought in crowds from across the Mother city and abroad to celebrate innovation, creativity and craftsmanship in longboarding. An annual gathering of Vans surf riders, this event is hosted by Joel Tudor in partnership with Vans Surf. To any local or international surfer that is interested in going to the future event series, I highly recommend putting this event on your calendar for the next round because you will certainly be signing yourself up for a wonderful time.

I arrived in Muizenberg late Saturday afternoon after spending most of my day hiking up the Table Mountain Chain, absorbing the beauty of Muizenberg Peak and St James Peak, which I reached via Silvermine East. On this day, Muizenberg Beach unfortunately had no waves, and a public announcement was sent out announcing that the Saturday event day had to be cancelled. Despite this, the festival itself still went on. And I was really stoked for the final day: Sunday! Over the course of three days, many different groups of people came together, from all over the globe – attending the festival in celebration of the diverse creativity and talent within the longboarding community. Sunday came, and I met with my crew, who told me where the best spot was where I would see the contest’s surfers in the water. As I got closer to the water, I could see a group of surfers just down the shoreline straight-up ahead. As I walked closer to them, I realised that I recognised these amazing people! It was John Van Hohenstein and Stevie Sawyer. They were preparing for the men’s category session in the contest. It made me so excited to be there, witnessing such talented surfers firsthand. I was truly in so much awe as I stepped over from the pavement towards the beachy sand. As I sat near the beach pavement, among the rest of the crowd, I felt like I was back in my childhood days all over again. Relaxed, and immersed within the ocean breeze. I definitely caught a few memorable glimpses of the waves that afternoon. I stayed a bit longer, walked back through Surfer’s Corner, and made my way to venture into the rest of the event’s festivities.

At the Duct Tape community market I was so enthralled by the immersive community-building experience. Of the workshops on offer for the weekend, I took part in the moonbag customisation with Sealand. All Duct Tape banners from the Cape Town stop have been donated to Sealand who are now working alongside Surfline to upcycle the banners into custom, sustainable bags. I also got to see some of the action when it came to the live hand-shaping of custom surfboards which were crafted by Muizenberg-local Alfonzo Pieters and Vans team riders Sophie Bell, Benny Urban, and Michael February, among others. These surfboards were on display at the event for festival-goers to see, and now live at Lifestyle Surfshop in Muizenberg for use by the local community.

When it came to the winner announcements, the competitors’ lists were revealed on the festival’s main stage. The list of Vans Duct Tape Invitational results revealed that from the men’s category, Kevin Skvarna came first place, Justin Quintal came second, Stevie Sawyer came third and John Van Hohenstein came fourth. From the women’s category, they announced that Ambre Victoire came first place, Honolua Blomfield came second, Kelis Kaleopa’a came third and Sierra Lerback came fourth. After the announcement, I met with Joel Tudor, himself. I was so stoked to meet Joel and to hear his perspective on the decision to choose Muizenberg as the location for this edition of the event series. He shared that, ‘‘When we made the decision to choose Muizenberg as the location for the festival, we considered the context of the location and looked at it historically. Muizenberg is one of the first beaches where people surfed at, here [South Africa]. If you watch The Endless Summer, there’s the famous scene where all the South Africans come together and surf with Mike Hynson and Robert August. So, generally there was the motivation to return to something nostalgic within the South African surf story.’’

Later into the night, things got a little more social. Vans held a private Duct Tape wrap party at The Movable Feast, in Cape Town’s CBD. With Vans-approved-pizza, beers on tap and live band performances, the festival wrap party hosted a festive group of Vans team riders and crew to celebrate the completion of yet another great festival turn out.

The wrap party was a good reminder that there are like minds out there. We’ve all been through this year together and the community will only get stronger the more we share – something which all of us can look forward to continuing to foster in the new year.

Looking back at the event overall, I think about the moments when I was appreciating the view of the waves from afar, whilst roaming through the sociability of the Vans community market. Feeling the warmth of the Muizenberg surf community is what kept me ecstatic all weekend. I was genuinely sad driving home because I did not want to leave the serenity of the Deep South. If you ever get the chance to visit Muizenberg’s Surfer’s Corner, it is definitely a trek worth making. The Muizenberg surf community will always be a welcoming space that is not only meant for surfing, but also fosters a culture of sharing stories and connecting with one another.