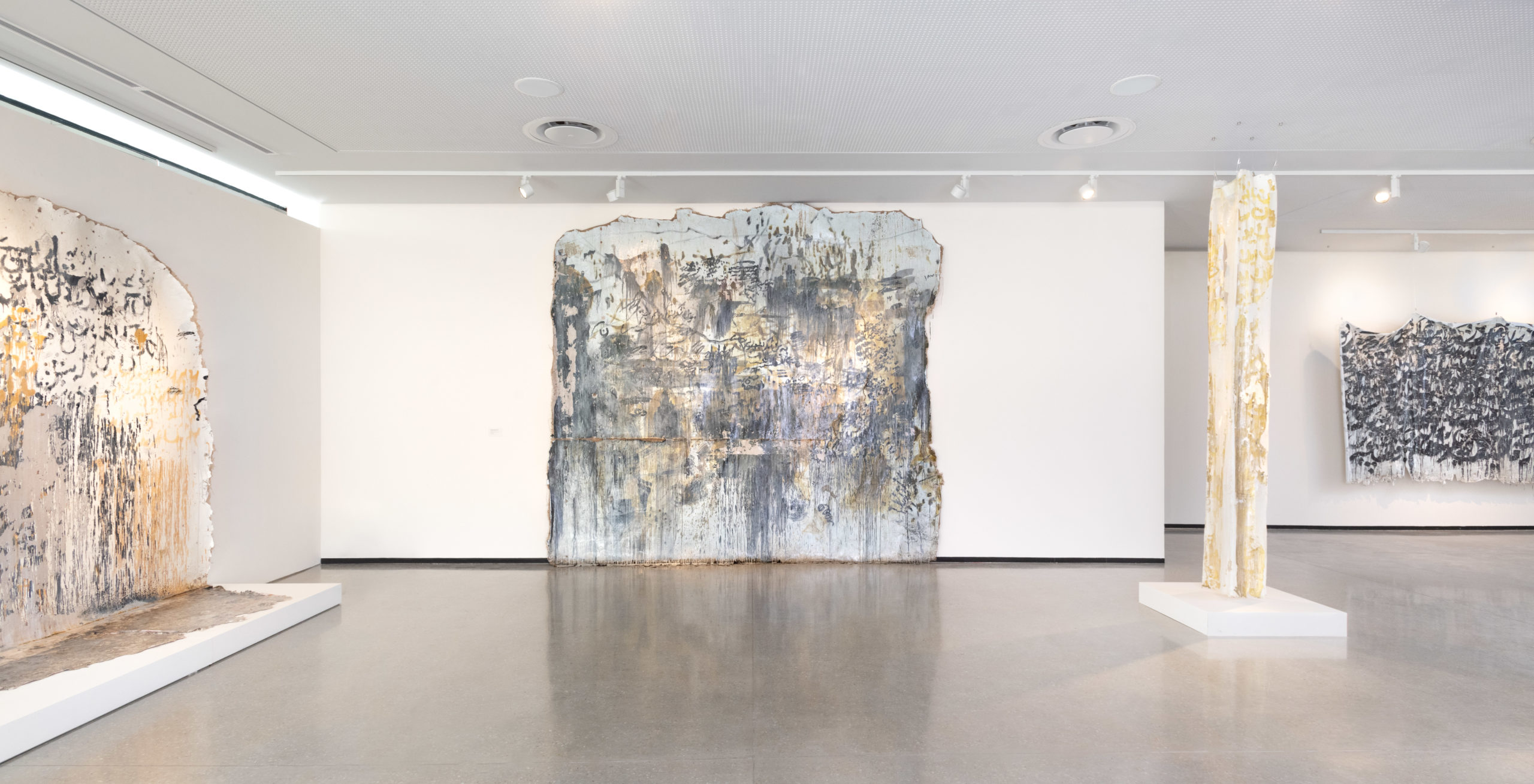 Central to Bineshtarigh’s artistic practice is language and text, written and physical, through intuitive translations and transliterations of shape and form. This results in work that has a written component as much as it has an aesthetic one, with interpretation as an open- ended and involved activity for the viewer, both through imaginative aesthetic interpretation and through the puzzling of text fragments. His intention is embedded in emotive responses, rather than cognitive ones. Through transcription and integrative mark-making, Bineshtarigh’s practice involves a questioning of communication and linguistic identity – occupying a liminal space that explores rather than explains and enables a mode of working that is both beyond geographical borders but also intrinsically linked to place making and identification. ‘Uncover’ is a body of work that pivots around memory, layering and place. Thinking through the questions of location, while working in a former clothing factory in Salt River.

Bineshtarigh’s work arises out of reflection and intuitive mark-making, while engaging with notions of history and presence.

Kamyar Bineshtarigh was born in Semnan, Iran. He lives and works in Cape Town, South Africa. In 2021, he was awarded the Simon Gerson Prize for an outstanding body of work for his graduate exhibition at the Michealis School of Fine Art, UCT. He received a Diploma in Fine Art at Ruth Prowse School of Art in 2019 where he also won the Ruth Prowse Award for his body of work An Exhaustive Catalogue of Texts Dealing with the Orient which explored Edward Said’s concept of Orientalism using Said’s eponymous book (1978) as the source material. In 2021, Bineshtarigh was awarded a Creative Knowledge Resources (CKR) Fellowship, an interdisciplinary project by the National Research Foundation and UCT studying socially engaged artistic practices in Africa and its diaspora. In the same year, Bineshtarigh participated in a number of group exhibitions including My Whole Body Changed into Something Else at Stevenson Gallery.

In 2019, the artist was invited to create a mural inscribed across the facade of the AVA Gallery as part of their 50th anniversary programming. Inspired by the freedom that comes with a DIY-spirit, between 2020 and 2021 Bineshtarigh curated his own independent solo show showcasing his body of work (Hafez) The Tongue of the Unseen Realms in an exhibition space in a factory warehouse in Salt River, Cape Town. In 2022, he presented koples boek(e) at the Goethe Insitut and recently installed a site specific piece for the recent Good Neighbours Open Laboratory at the Nirox Sculpture Park.