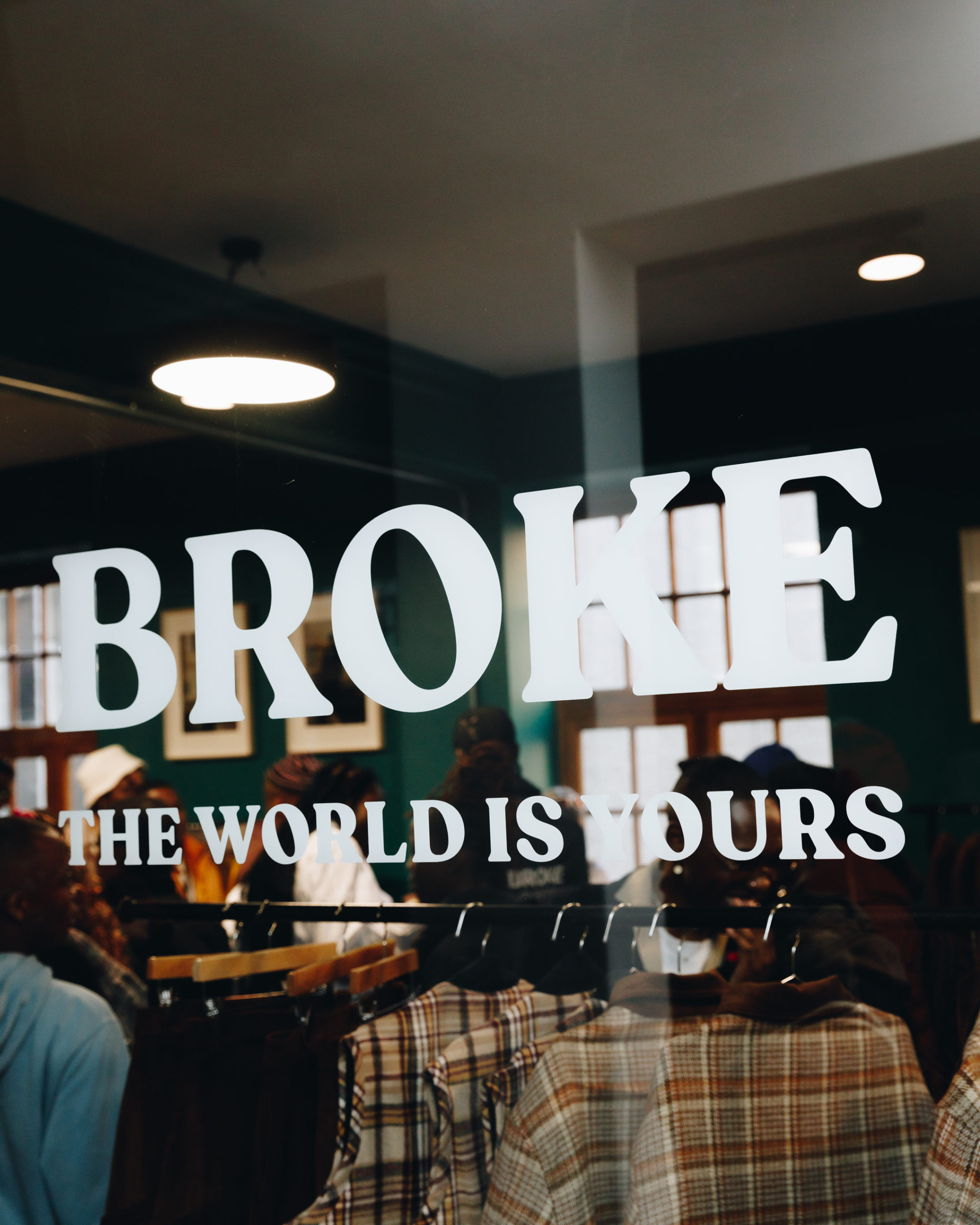 BROKE Boyz Collective Present The World Is Yours

The power of community has shown itself in South Africa’s creative sector over the years. It is by working together and having a hub of support that one can take their offerings to the next level. BROKE, the epitome of why community matters, is not only a cross-cultural clothing brand but a family of multi-talented creatives that can’t be boxed into one form of expression but can be located by an ethos and approach to life of Being Rebellious Over Konforming to Expectations.

It’s been amazing to watch the rise of this creative family from relaunching the BROKE brand in December 2022 to where they are now. The BROKE Boyz collective are no strangers to 10and5 having collaborated with them earlier in March 2022 for them to tell their Cape Town City Stories by clashing with their pizza-slinging contemporaries Pizza Shed – culminating in an epic event attended by over 500 people

It is the same energy of pure intent that radiated in the room as BROKE presented their Runway Showcase at the Lemkus Exchange Building. BROKE’s loyal supporters, friends, and creatives from the fashion industry such as Lukhanyo Mdingi and Anita Hlazo of Afrogrunge amongst others. Some of the most exciting young photographers in Cape Town were there to capture this moment, fashion lovers were dressed to the nines in their streetwear-inspired fits. The energy in the room was self-evident that this was a culture-shaping moment, especially in Cape Town.

The set-up was immaculate with white chairs adorning the 3rd floor of the building in a continuous loop shape that gave a front-row experience to those attending. The showcase was also live broadcast in partnership with ASA Magazine so that those who couldn’t make it physically could tune in. Simbongile Bino, BROKE custodian and events manager, announced to us that the show was about to start. As the excited chatter calmed down, voice recordings of the Broke Boys and friends started playing explaining what BROKE means to them providing profound context to what they represent.

THE COLLECTION INCLUDED NEW PIECES SUCH AS THE SHACKET, BROKE COLLEGE HOODIE, THE WORLD IS YOURS APPAREL, AND NEW ITERATIONS OF BROKE T-SHIRTS STAPLES AMONGST OTHERS. THE SHOW WRAPPED SUCCESSFULLY AS CREATIVE DIRECTOR ANDILE DLAMINI CLOSED THE SHOW TO RESOUNDING APPLAUSE AND EMBRACE AS HE AND THE MODELS TOOK A FAMILY PORTRAIT.

They ideated and executed the World is Yours fashion show as a dedication to the loyal supporters who’ve been with them since the beginning and a re-introduction to those following the BROKE journey, so we thought to ask a few attendees what The World is Yours means to them:

Everything you want is accessible, just work hard, put your head down and push

The whole setting from the chairs to the location before you even get to the actual clothing collection. How everything was done, the music, the start of the whole thing when they were explaining what BROKE is. I think that was great. When it comes to the collection, I liked all of the pieces that they put out overall I’ll give it a 10 out of 10. Lastly, since I’ve been following their journey this kind of feels like the pinnacle, but also just the start at the same time. I’ve been saying since this morning, that this is huge and they didn’t disappoint. They just brought a lot of people together, dreamers, here to appreciate art basically and to support each other. I always feel like Broke is, I call it a bit of a cult sometimes. Because it’s just this movement of togetherness. And it’s quite amazing to see people being put together by and it goes like this, you know, amazing

I thought the ability to bring so many people in the room was amazing. I’m eager to see how they push things forward and possibly collaborate with other designers in future

You know coming from them talking about it at the house listening and hearing. Just working through like, the past few weeks, you know, helping out and seeing what’s happening and just to finally see the vision come alive is very inspiring for me as a designer coming up as well. I’m a photographer, It’s just showing me that yo like, anything is possible. The show? I just thought was beautiful, emotional, and well-curated

All in all it was a good show, I loved it. I wish we could’ve seen the clothes a bit longer on the runway. I enjoyed the clothes, especially the shacket

The World is Yours to me means, you can also do it. You don’t have to box yourself in anything that you do. You just have to do you. That’s my perspective

You can make anything on yourself. Just believe in yourself. Push through, there’s no one actually holding you back except yourself. Yeah, like everything’s there for the taking. That’s what it is- The World is Yours

Them bringing together this conglomerate of talent in one building is very amazing. Streetwear in Cape Town has always been predominantly, white and coloured so it’s cool to see them taking up space. We know that there’s more to come for the boys. We’re so proud of them for how far they’ve come and how much they’re doing for the culture. We love them

Hey beautiful people, we live at the Exchange Building in Cape Town. I want to send flowers to myself and my brothers for making that promise to relentlessly chase our dreams. I also want to remind the youth and myself that The World is Your Oyster and the best things in life reside on the opposite side of fear. Fear not, lead with love, and trust your intuition

If this BROKE experience is anything to go by there is a lot to look forward to in how they will use music, fashion, curation, and event skills to keep us wanting more, from Cape Town to the world. Shop the Collection on the Lemkus website.