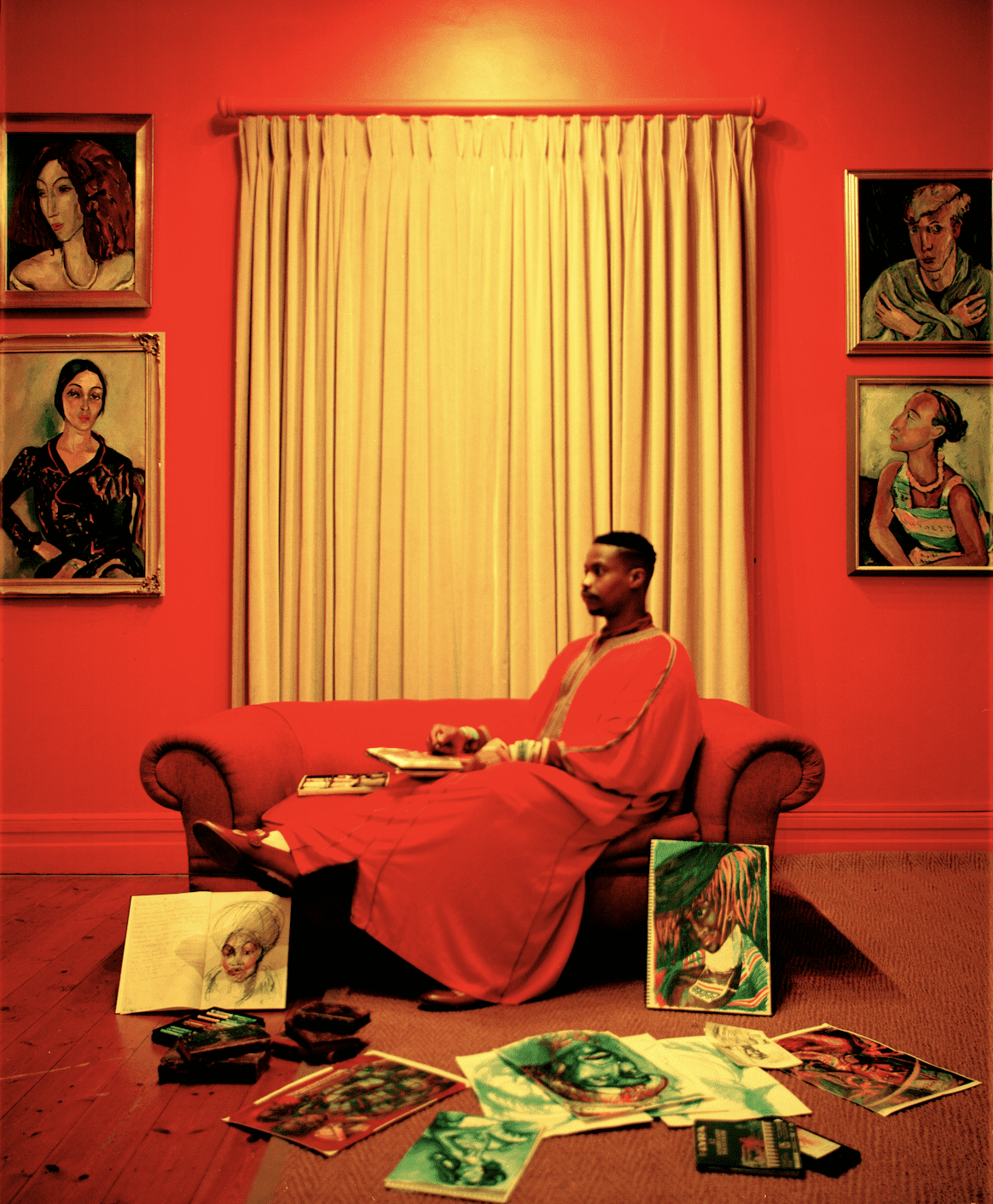 The relationship between the contemporary artworks of Athi-Patra Ruga and that of the late, celebrated canonical painter Irma Stern is one of contrary tendencies: both admiration and disruption are evident. Attracted by Stern’s technical ability, lavish use of colour, her bold position as Expressionist painter in the conservative South African art world of her time, and the atypical life she led; but acutely aware of Stern’s colonial viewpoint, Ruga time and time again casts a revisionist eye over her work and generates new interventions.

To further this dialogue between the two artists’ works, the UCT Irma Stern Museum (ISM) will host an exhibition where the works of both artists, Irma Stern and Athi Patra Ruga, will be installed alongside each other within the museum. The exhibition will include new site-responsive works that Athi Patra Ruga produced during a 3-month residency at the ISM, combined with select and iconic loan works. The exhibition opened for public viewing on 31 March 2022 and runs until 18 June 2022. The show is accompanied by a series of walkabouts, talks and workshops.

The retrospective will feature select examples of Ruga’s iconic tapestries from the period 2009 – 2018 which reference paintings done by Stern during her 1943 and 1946 expeditions to central Africa.

Since 2008, Ruga’s work has been in conversation with the art of Stern, drawing on and reworking such iconic paintings as Stern’s Watussi Queen, Swazi Youth and Zulu Woman. Now Ruga is engaging with the famed painter at the intimate level of her former home. This project is part of an ongoing interest in the Stern oeuvre.

Famous during the later years of her career, and to this day, Stern’s work is now well entrenched in the annals of South African art history. Largely in response to witnessing first-hand the horrors of the South African War, First World War, and losing loved ones to the Holocaust, Stern sought an alternative to western urbanised civilisation in a fantasy of noble exotic cultures. As such, many of her paintings portray an idealised and romantic version of “native” culture.

For Ruga, such pieces deserve a closer critical look. Over the years, he has taken her famous images and destabilised them, Queering them as a response to the status quo.

In his own rejoinders to Stern’s paintings, Ruga reassesses from a post-colonial stance. For instance, he gives Stern’s nameless and passive sitters – the paintings have unspecific titles like “Malay girl” or “Zulu Woman” – actual names and agency, disrupting the notion that these sitters’ primary function was as a tableau for European contemplation and consumption.

This response is situated within Ruga’s broader body of work, one that constitutes a contemporary response to the post-apartheid era, and which critiques the existing political and social status quo. According to art consultant Mary Corrigall, his approach is “in some way an attempt to view the traumas of the last 200 years of colonial history from a place of detachment … where wounds can be contemplated outside of personalized grief and subjective defensiveness.”

Ruga applied this same lens during his 3-month museum residency period, and through that has created a new series of paintings and pastel drawings in response to the museum collection and archival materials. These paintings form a dialogue between the two artists, hoping to prompt a shift in the reading of both of their works.

Despite their broadly differing viewpoints, there are astonishing similarities – perhaps a contributing factor to the magnetic pull that exists between them. Both Stern and Ruga were/are ground-breaking and transgressive in their willingness to push the boundaries of aesthetics and explore new ways of making art. Both were/are larger-than-life characters whose charisma, love of an opulent visual language, and unrelenting focus on their art, have made them internationally celebrated. And in both of their work, we see a search for an alternative social fabric – be it a search for Utopia, or the construction of a mythical metaverse.

Ruga’s oil stick and pastel works on canvas will be hung among Stern pieces in the museum, deepening the invitation to the viewer to compare and consider. As part of the exhibition, Ruga will present a number of learner engagements and walkabouts that highlight the conversation with Stern and her art he has had for over a decade.

For more information and dates for walkabouts and events, please see below and visit the UCT Irma Stern Museum website. You can also follow the museum on social media

Booking via irmastern@uct.ac.za is essential.

Booking via irmastern@uct.ac.za is essential and the cost is R250 per person.

Athi-Patra Ruga is a noted contemporary South African artist who has worked within a range of mediums including performance, photography, textiles, fashion, video, and sculpture. He was born in Umtata in 1984, but raised in East London. In the early 2020’s Ruga studied fashion at the Gordon Flack-Davidson Academy of Design in Johannesburg and now lives and works in Cape Town and Hogsback.

His works form part of private, public, and museum collections across the globe. These include the Museion Museum of Modern and Contemporary Art, Bolzano, Italy; the CAAC Pigozzi Collection; the Wedge Collection, Toronto, Canada; the Smithsonian Museum of African Art, Washington DC, USA; the Foundation Louis Vuitton, Paris, France; Fondation Gandur pour l’Art, Geneva, Switzerland; The Zeitz MOCCA, Cape Town, South Africa and the IZIKO South African National Gallery, Cape Town, South Africa. Ruga is also the co-founder of Victory of the Word, a fundraising and development project in support of the historic Lovedale Printing Press in Alice, Eastern Cape, as well as the Artistic Director of BODYLAND, an incubator residency for artists held in the Amathole Village, Hogsback.

The “Synaptic” Exhibition at THK Gallery is Coming to an End