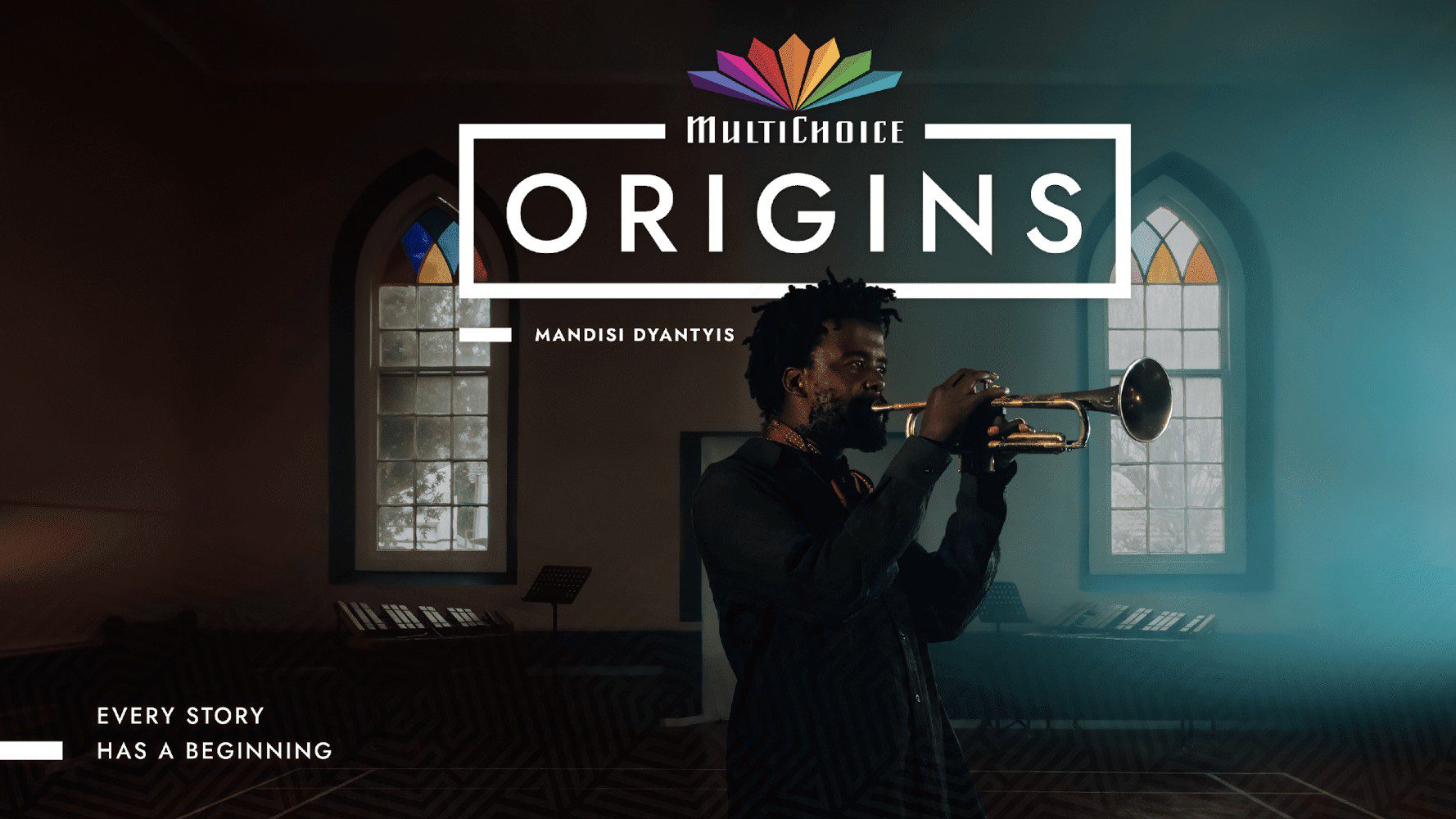 One of the five storytellers on the inspiring ORIGINS series by the MultiChoice Group and Showmax, South African musician and instrumentalist Mandisi Dyantyis, teleports us through time with every brazen boom of his trumpet. His music soothes our souls and connects us to those who once were long ago. Then, we hear the story of our humanity through the language of his brass notes. Read on as we speak to Dyantyis about his music journey, growing up in P.E, finding his community and learning through discipline.

You’re a very well-known musician, and those who’ve attended your concerts over the years have gotten a glimpse of your comedian side. In your own words, who is Mandisi?

Mandisi is just a simple person, the third of three children from my mother. I am from Gqeberha, I am from a large family, and I am made by those experiences. Those simple experiences.

What influence did growing up in P.E have on you, that still remains today?

When you grow up, you don’t know that you’ve been influenced; that’s the beauty of this. Then when you are where I am now, especially when you start to create- every creative is constantly tracing through life and finding those moments of simplicity where they understood things clearly. So whether it’s you as a kid playing outside, your mother calling you because it was getting late, or walking to school with your friends. Sharing a meal, fighting about who ate your leftovers, all of those things, you know. I am constantly reminded of those very simple moments that other people might call ‘moments that show that you grew up with nothing,’ but for me, the special moments are the moments that remind me that there’s so much to life. It is about those relationships and the impact people have on you. That is what Gqeberha is for me. It’s the community, the people who are constantly aware of your actions. Whether good or bad, people are aware of what you are doing. You are living your life, and you often have this crowd of people backing you who want you to do well because your success or whatever you do impacts them. They get to be proud that they have a trumpeter in their street, or we’ve got a kid who has earned a scholarship to go and study at a former Model-C school because all of these achievements are our achievements. And so, for me, those are the things I want to think about when I’m thinking about Gqebs.

Building on that, I’ve noted that you have a large support base in Cape Town, particularly at the Rosebank Methodist. We even see it as one of the central locations in your episode of the documentary. Tell me more about this.

What is your approach to collaboration?

For me, it’s simple: collaboration is simple. Honestly, I work with people I would share a meal with. I like to work with people that I can have a decent conversation with about anything. Because for me, it’s in the energy. As someone who collaborates with musicians and people all the time, I gravitate towards stories and try to listen to other people’s stories. Because when you can hear stories from other, where they come from, and what drives them, you can easily tap into things they don’t know because you use those experiences as catalysts of whatever it is you’re trying to create.

Describe your conceptual process, from beginning steps to end, when it comes to sculpting any one of your projects.

It’s very fluid, and it needs to impact and move me. So in whatever form it needs to make me laugh, if it’s funny, or makes me fall in love, or if it’s a love story, I need to feel it in my gut first. Only then can I comment on it, because I’m focusing on how it made me think. So whether it’s Ndimthanda, Molo Sisi, or Cwaka, there’s always a tangible feeling that I felt, that then drives me to write about it, because it’s consuming my system. So once that’s done, you know music dictates. And once you’ve accepted that something is there and you need to let it out. After all this, the process with the band members becomes much more manageable.

Your music has a healing, spiritual, and even transcendent feel to it. When did you start tapping into this gift that you have?

I didn’t tap into a gift; I just became. There’s a debate that comes forth often for me: musicians that have gone to school don’t have ‘heart’ because they are so technical because they (yada yada…). Artists who have gone to school lose the edge, authenticity, and all those things, right? And I understand that as I’m growing up, I’m not trying to defend that. I understand what people sort of mean because if you studied something, you learned something, so there are technicalities that you need to deal with. But also, art is from your spirit. If you think about it, it’s not tangible. It’s a spirit. And as an artist, you can allow it. You can, first and foremost, acknowledge and allow that spirit to push you to these places that you don’t know. You’re bound to create art that is literally a gift to you. Because we’re given different gifts, right? And so when you’re given a gift, and you are obedient in the things that you’re given. If it’s a song, and you’re given it this way, you try your ultimate best to try and conform in delivering this song, as best as you can, in the closest way that it’s come to you. And then whatever else then happens is not of your own doing.

Have you ever experienced self-doubt as an artist, and how did you conquer that?

I have, but I don’t dwell on those things much. I’m very stubborn, and I’ve tried to carve valuable tools for myself. I view the experience holistically. I don’t necessarily say “I want to create” ever. Something must push me hard to create. When something does come, I grapple with it, fight with it, and want answers. From a very young age, surrounded by the people who were my role models, I saw that that was the only thing they were living for. They were living to grapple with this “thing” that made them wake up at night. So after they had done that, they wanted to make sure to honour it in the performance, and because they had the fight, wrestling with this “thing”. When they went on stage, they gave it their all. So in everything I’ve just told you, there’s no one else. You’re not thinking of anyone else. But you’re dealing with your negativity and whatever else that is. And if we can teach that, if you can speak about that a lot, because that cancels what people think about me, that cancels what self-doubt does in a way. You will only deal with people when you’re delivering the product, and they’re receiving it.

In the ORIGINS documentary, you speak about how singing in Xhosa connects you to ancestors and validates their existence – what is this encounter like for you?

It’s magic. It’s beautiful. I feel connected to people I didn’t know. I feel connected and related to the people who gave birth to the people who gave birth to me. At that point, I know that I’m connecting myself to that lineage. So it is not just by me saying “ndingu Mandisi, ndingumXhosa. But by actually learning, I know that my people sang, so when I sing, something in them happens, you know, because I know that something in me happens.

What is Mandisi loving right now? What inspires and moves him?

Currently, I’m in the theatre; I’m working with a group of singers and actors and stuff like that. I’m creating music differently than I would in a small setup. So I’m working with about 10-20 musicians, crafting the show, so I like that. It’s different from what I do daily. So yeah, I love that. I love to listen to concerts; I love to walk; I love to run, you know, all of life, all of life-encompassing, that’s me.

What can we look forward to next from you?

There is a theatre piece we might be taking to France at some point.